Top Cultural Sites To Visit In The Mallorcan Capital, Palma 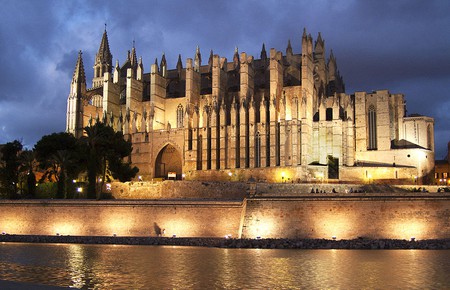 Mallorca is a haven for holiday goers who flock to the island for its white beaches, translucent waters and scorching climate. Yet the island’s architectural and artistic history rivals its natural offerings, with contemporary artist Miquel Barceló’s update of Antoni Gaudí’s gothic Cathedral and Joan Miró’s studios among the many cultural sites Mallorca’s capital Palma has to offer. 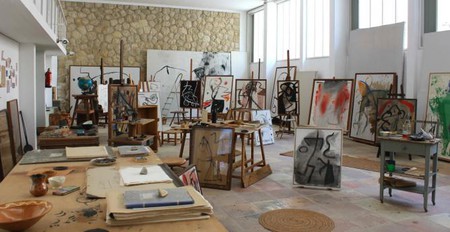 Catalan artist Joan Miró cherished the archipelago island of Mallorca having spent large portions of his childhood there, before marrying his Mallorcan wife and settling down in Palma. In 1956 Miró commissioned his good friend and architect Josep Lluís Sert to design a spacious studio adjacent to his house. Today the house is privately occupied but the Joan Miró Foundation have opened Miró’s studios to the public, in addition to creating an exhibition space to display Miró’s works. The public are also able to wander around Son Boter, a late 18th century Mallorcan house, where they will find walls covered in Miró’s spontaneous scribblings.

The studio is an unmissable cultural experience for anyone visiting Palma. With rays of strong Mediterranean sunlight permeating the space, it is evocative of Miro’s artistic practice and offers an incomparable insight into the way in which this iconic artist worked. The Joan Miró Foundation have perfectly preserved the studio and it still remains as the artist left it, with dried paint drips coalesced on retired brushes. Newspaper clippings and images that Miró once pinned up adorn the walls, alongside incomplete paintings resting on easels. Miró’s studio is an intriguing glimpse into the conditions and context in which the artist produced his famous works. 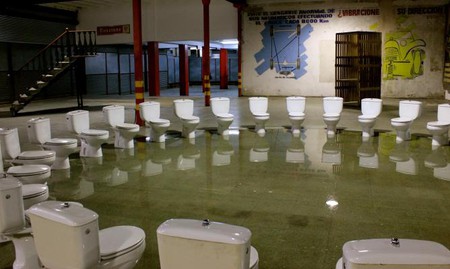 Unbeknown to most, visitors can explore a different side to Palma’s contemporary art scene in the Galeria Horrach Moya Workshop. The owners of Galeria Horrach Moya — a contemporary commercial gallery situated on a picturesque square in Palma’s old town — also run Galeria Horrach Moya Workshop, an old tire factory turned artist workshop. The workshop boasts high ceilings and huge spaces which are typical characteristics of the city’s industrial buildings and this expanse of interior space, coupled with smaller studios, provides artists with a rare and unrestricted freedom to create mammoth works that play with scale and materiality.

The general public are encouraged to explore Galeria Horrach Moya Workshop, but are allowed in by appointment only. More often than not visitors will find artists in the middle of a creation, one that would not be possible in the smaller dimensions of a city gallery. Artist Susy Gómez, for example, used the space to construct large installations which explore themes of gender, the subconscious and Palma’s varied histories. 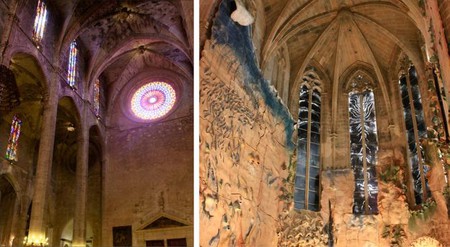 Overlooking the capital since the 5th century, the Cathedral of Mallorca (or Cathedral of the Eucharist, the Sea, Light and Space) is emblematic of the island’s religious and artistic history. The sheer volume and scale of the gothic structure induces a sense of spirituality as 61 stained glass windows inadvertently capture strong rays of sun.

Catalan artist and architect Antoni Gaudí played an influential role in restoring the Cathedral, and worked on the colossal project during his time in Palma (1904-1914). During this period he reconfigured the interior spaces by completely removing two alter pieces and moving the High Altar and the choir stalls from their original positions. However, Gaudí’s most memorable addition to the Cathedral was the canopy which he created with Josep M. Jujol, an artist and architect with whom Gaudí collaborated on many occasions, including on his noted projects in Barcelona. Due to unfortunate circumstances, the canopy was never finished, but the incomplete masterpiece still hangs in the Cathedral today.

Perhaps the most unusual feature of the Cathedral however, is the contemporary update of the Chapel of Holy Sacrament by Mallorcan artist Miquel Barceló in 2007. The artist dedicated the chapel to the Biblical story of the miracle of the seven loaves and fish, and covered the walls with a layer of clay from which sculptured fish and sea creatures leap out. Instead of the traditional stained glass windows, Barceló has chosen to black them out, leaving only cracks to let in slithers of light. The artist’s immersive underwater scene uses creative and contemporary techniques to evoke a sense of spirituality, and alongside Gaudí’s touches within the Gothic masterpiece, create a unique religious and artistic experience. 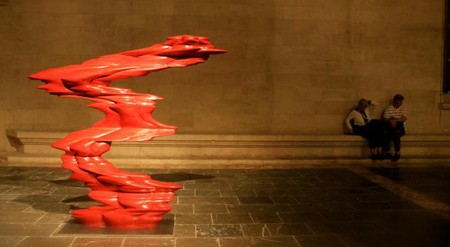 Surrounded by tapas bars and trendy cafes is La Lonja, a Gothic architectural gem designed by architect Guillermo Sagrera in the 15th century. Once the Maritime Stock Exchange, it is considered one of the most unusual and beautiful buildings in Mallorca and has become a vital space within Palma. The building regularly hosts concerts and festivities, but is especially revered for its art exhibitions which bring this unique space to life with the interaction of art and architecture.

Unexpectedly, the roof of La Lonja has its own rich history; having gone through various updates it is now an amalgam of its past changes, and its curved forms mimic the surrounding mountainous landscape. Visitors can book ahead for a visit up to the roof which boasts spectacular views of Palma and the Balearic Sea.