From a purely technical point of view, Guernica is a mural-sized oil painting produced by the Spanish painter Pablo Picasso in 1937. But that is just the material aspect of this masterpiece, and upon closer inspection, we discover an elaborate reflection of Spain during that time and, furthermore, of Europe during the troubled interwar period. Find out more about one of Picasso’s most powerful paintings of all times.

The 1937 Paris International Exposition and the Spanish Civil War

Pablo Picasso painted Guernica in 1937 for the International Exposition dedicated to Art and Technology in Modern Life, celebrated that same year in the city of Paris. One year before, on the 17th of July 1936, a bloody civil war that opposed the left wing republican government to a right-wing military uprising had started in Spain. It was in response to this event and the ongoing civil war it provoked that the Spanish Government asked Pablo Picasso to create a painting for its pavilion at the 1937 International Exposition – to expose the horrors of the conflict to the rest of its European neighbors and bid for their aid.

Faced with such a sizable challenge, Picasso drew inspiration from one of the most shocking chapters of that war: the attack by the German Condor Legion and the Italian Legionary Air Force on the Spanish city of Guernica, in the Basque Country. This bloody attack took place on market day when much of the local population was gathered in the town’s streets. This plus the fact that this was the first carpet bombing to be performed during the Spanish Civil War (a progressive and systematic attack on one location, aimed at destroying it completely) are the most likely explanations of why Picasso chose to focus on Guernica as a symbol for the war in general. 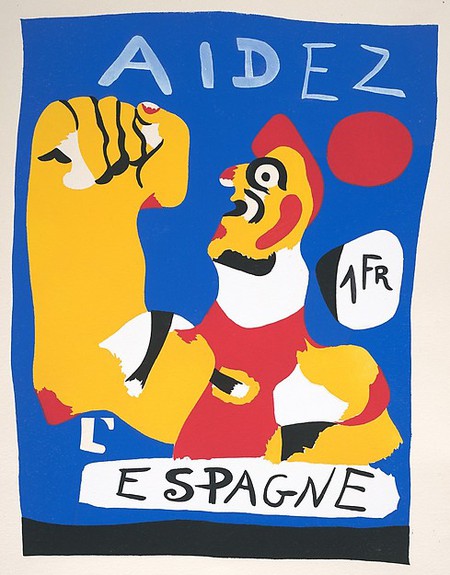 The Un-Enlightenment of Europe and the Avant-Garde

While Spain was embroiled in its horrific civil war, the scene in Europe was not so much better; the Old Continent was in the midst of some of its darkest and most tense years, the so-called ‘interwar period.’ The First World War had ended just two decades ago, and the start of the Second World War was imminent. This very particular state produced an intense political and economic episode in Europe, which triggered an impassioned cultural movement. The most eminent thinkers and artists from the Old Continent saw in this context the death of the Enlightenment project born in the XVI century. Humanity was facing its own annihilation, and they didn’t want to remain passive in front of its self-destruction.

Facing this general ambiance of exhaustion, some artists started to confront the situation, leading to the birth of new styles through the pursuit of their creative passion. These new styles were profoundly heterogeneous in their specificities, but they all nonetheless shared a sense of disruption with the past and a lack of fear in the face of innovation: these were the avant-garde.

Picasso’s work, and Guernica in particular, is an example of this new interwar art. Contrary to most of the previous styles, his aim is not to depict reality as it arrives to the human being through their senses (sight, smell, feeling, etc.) but to convey a message. In Guernica, Picasso doesn’t try to describe the scene as if he were a mere spectator. He creates a fictitious scene full of reality, where he wants to show the meaning of war; and for this purpose, he plays with perspective, shape, the characters, the color, etc., and perhaps most importantly of all, with symbols. 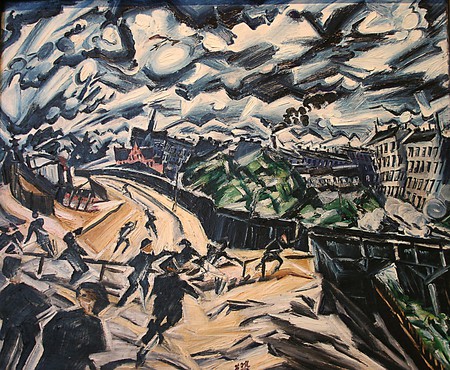 Symbolism in the Guernica

While contemplating this piece, the first thing that has to be considered is even if the facts surrounding the attack on Guernica serve as an inspiration, this is a symbolical painting, not a narrative one. That means its main purpose is not to describe what happened in the Basque city but to act as an expression against war and brutality. There are, of course, many ways of interpreting the figures and symbols in the painting. In fact, Picasso himself reacted to the many attempts to read meaning from his piece by answering: ‘This bull is a bull, and this horse is a horse… If you give a meaning to certain things in my paintings, it may be very true, but it is not my idea to give this meaning. What ideas and conclusions you have got I obtained too, but instinctively, unconsciously. I make the painting for the painting. I paint the objects for what they are.’ There are nine characters in the painting, six humans and three animals – all of whom have been the focus of many differing theories.

At the far left is a woman with her dead child in her arms; many experts see in them the figure of the Pietà, the Virgin Mary cradling the dead body of her son, a symbol of a Mother’s love and suffering. Others go even further and describe this scene as a representation of the nation that observes in sufferance the death of its own people in this brutal war, or as the image of Madrid, the capital city of Spain, being besieged by the fascist army. Behind them, there is a bull and a wounded horse; these two animals have a long tradition in Picasso’s work, and there has been a lot written about their meaning for the artist. One of the most popular interpretations of the role played by these figures in Guernica claims that the bull represents the cruelty of war, whereas the horse is another reminder of the suffering of people. At the bottom of the painting, lying on the floor, is a brutally dismembered soldier, generally believed to represent the military losses of the war and the role of the army. In the center of the painting, between the bull and the horse, there is the figure of a dove that appears to be screaming – a symbol of threatened peace in Europe.

Finally, to the right of the horse, there are three other women. One of them is represented as a woman with her breasts uncovered – a feature many people in the art world have linked to the figure of the Republic. In this case, the woman also has a wounded leg, which has increased the theories that see her as the young Spanish Republic that has been attacked by the rebels. Above her, there is another woman overlooking from the windows and holding a light. This object, together with the sun that is placed on top of the horse, have been subjected to a deep analysis, too. Some theories see in them a reference to the technological revolution in the 20th century, as the sun contains in it a light bulb. Others see them as symbols of the last remnants of rational thinking and the Enlightenment in Europe – the battle between lightness and darkness that this war represented in the eyes of the author. Finally, there is one last woman shouting of horror while a house behind her is on fire, a further reminder of the cruelty and losses incurred during the war.

Taking a more general perspective, there are also different details which are used by the painter to underline the drama of the situation: the scale of grey used to color the painting, the characters’ gestures, the idea that in this bombing everyone dies – the soldiers, the civilians, even the animals – and the constant reminiscences to the battle between darkness and brutality against reason and peace. Thus, by analyzing all the details of the composition of this masterpiece, the intention and the message that Picasso wanted to express appears: the artwork is not only a perfect description of the situation in Spain during those years but also a metaphor for the confrontation in the interwar years and, on top of everything else, a timeless message against war. 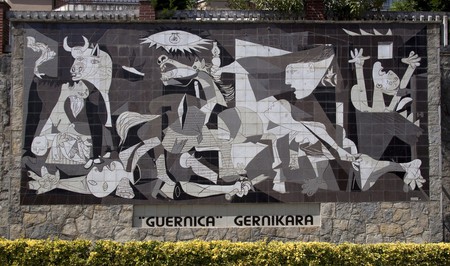 Guernica in the Present Day

On the 1st of April 1939, the Republican government and allied forces were defeated, and the Nationalist Army took control of the country. This meant that the mural was not safe to return to its home country after the end of the international exhibition. It could not stay in Europe either, as the onset of the Second World War took hold in the region. Eventually, the painting traveled to the United States where it was exhibited for decades in the Museum of Modern Art (MoMA) in New York. Picasso declared that the painting belonged to the people of Spain but that it couldn’t come back to the country until democracy was restored again. Finally, in 1981, some years after the death of the dictator Franco, the painting made its return to Spain. At first, it was exhibited at the Casón del Buen Retiro in Madrid, but since 1992, it can be seen at the Museo Nacional Centro de Arte Reina Sofia, also in the city of Madrid. In addition, a tiled reproduction of the masterpiece is on show in the town of Guernica itself, where the shocking events took place. It is on show in the open air for all to see – as a symbol of the city’s desire for the painting to be returned to the place which inspired it.