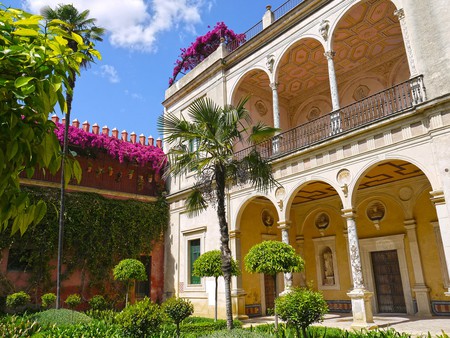 When the Catholic conquest of southern Spain ended in Granada in 1492, not all of the region’s Moorish population fled. ‘Muédjar’ is the name given to those who remained but who did not convert to Catholicism (unlike the ‘Moriscos’, who did); their continued presence in Andalusia also resulted in an architectural style of the same name that combines both Moorish and Christian influences. Some of the finest examples of this unique style are visible in the Andalusian capital. 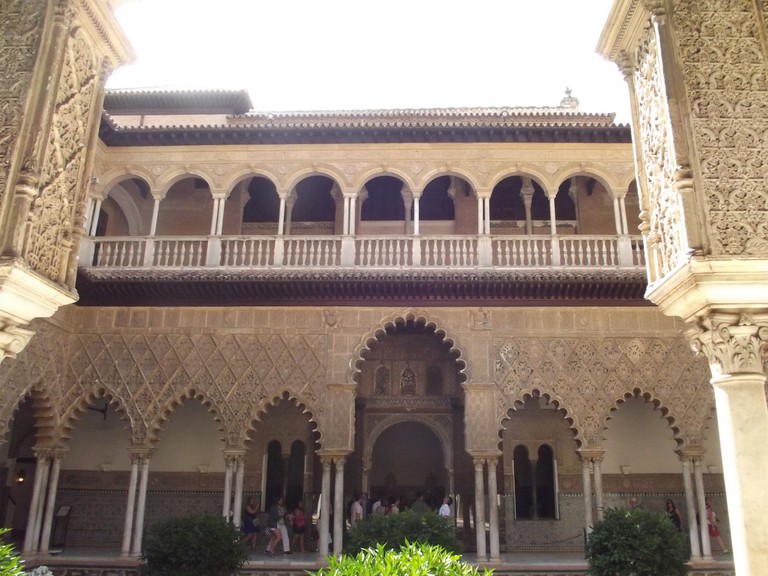 Mudéjar architecture is notable in the interiors of Seville's Alcazar | © Elliot Brown / Flickr
Book Now
The greatest surviving instance of the Mudéjar style in Spain is Seville’s Alcazar palace – a building that might lack the architectural pedigree of Granada’s Alhambra but is all the more fascinating for it. Work on this sprawling complex – the top floors of which comprise the Spanish royal family’s Seville residence – began in the 10th century and continued, on and off, until the 19th century. The result is a structure that showcases fine examples of Moorish and Renaissance architecture as well as Mudéjar, with the latter style being particularly notable in the archways of the Alcazar’s peaceful internal courtyards. It is perhaps the greatest single monument in Seville that demonstrates how the two cultures have shaped Andalusia.
Open In Google Maps
s/n Patio de Banderas, Sevilla, Andalucía, 41004, Spain
+34954502324
Visit Website
Give us feedback 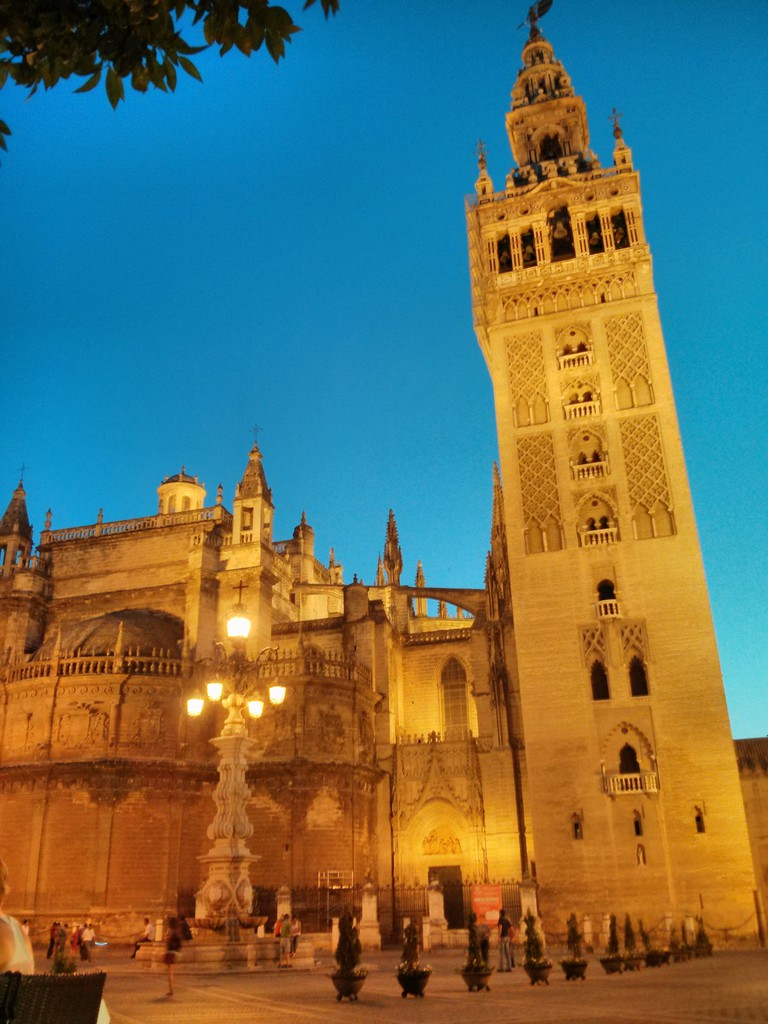 Seville's iconic Giralda bell tower | © Mark Doliner / Flickr
The most iconic representation of the Islam and Christian traditions that define Seville’s history is the Giralda bell tower, attached to the city’s massive cathedral. Originally, the Giralda was a minaret to the mosque built in the 12th century by Seville’s ruling Almohad dynasty; completed in 1198, a large copper globe in the traditional Moorish style topped the structure. Like the cathedral itself, the minaret was left standing when Christians took over the city in 1248, but the copper sphere was toppled by an earthquake in the mid-14th century and replaced with the bell tower we see today. Viewable from most spots in the city centre, this great example of Mudéjar architecture has inspired many imitations the world over.
Open In Google Maps
s/n Avenida de la Constitución, Sevilla, Andalucía, 41004, Spain
+34902099692
Visit Website
Give us feedback

This gorgeous 15th/16th-century mansion is one of central Seville’s more obscure historical attractions but is one of its most beautiful Mudéjar structures. Started by the wealthy ‘conquistador’ and Mayor of Andalucia, Pedro Enriquez de Quiñones, in the late 1400s and like Seville’s great Alcazar, Casa de Pilatos is a captivating mixture of Mudéjar and Renaissance styles. Its various quarters sit around a central courtyard that features some of the most beautiful gardens in Seville. So attractive is the palace that it’s starred in two films – 1962’s Lawrence of Arabia and 2010’s Knight and Day. It takes its name (‘Pilate’s House’) from Quiñones’s son Fadrique, who travelled to Jerusalem in 1519 and returned overflowing with enthusiasm for the Holy Land. 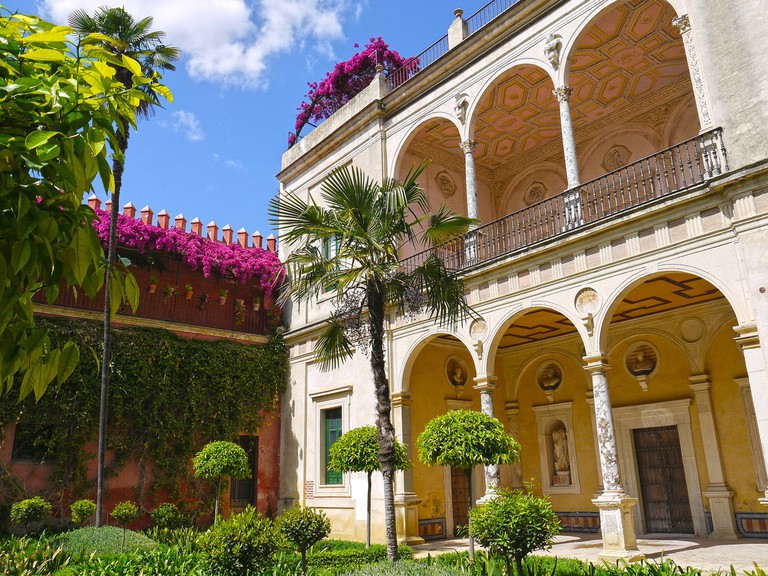 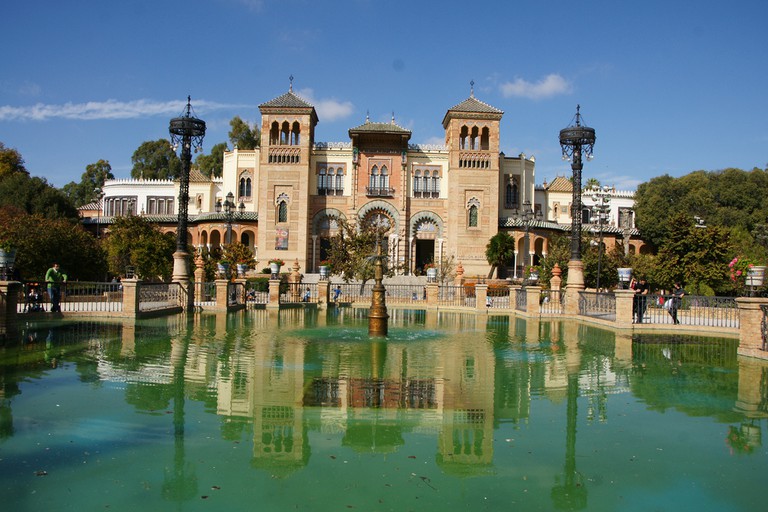 Seville's Pabellón Mudéjar | © fourthandfifteen / Flickr
One of the most famous neo-Mudéjar structures in Seville is in the city’s lovely Maria Luisa Park. Like the park itself and the famous Plaza España buildings in the same area, the ‘Mudéjar Pavilion’ was built for the Ibebro-American Exposition of 1929. Originally serving as an art pavilion during the Exposition, it now houses Seville’s Museum of Popular Arts and Traditions – but its ornate ceramic and brick exterior is as intriguing as anything you’ll see within. The Pavilion’s beautiful façade, flanked by two Moorish-style towers that resemble mini Giraldas, overlooks a vast plaza with a beautiful pond and fountain at its centre.
Open In Google Maps
3 Plaza América, Sevilla, Andalucía, 41013, Spain
+34955542951
Visit Website
Give us feedback 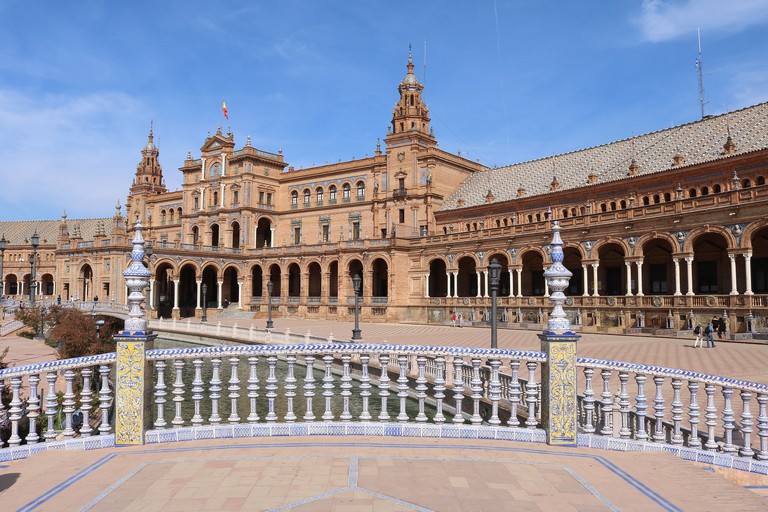 Plaza de España, Seville | © medienservice/Pixabay
The beautiful, expansive Plaza de España is home to one of the finest examples of the neo-Mudéjar style in Seville. Built in 1928 in preparation for Seville’s hosting of the Ibero-American Exposition of 1929, this vast, half-moon building showcases a satisfying blend of Moorish-revival and Renaissance styles. Splashes of Art Deco also characterise the colourful façades of what are now offices for southern Spain’s luckiest regional politicians and bureaucrats. A large moat fronts the buildings and features four bridges representing the ancient kingdoms of Spain; it’s a place where you can admire the neo-Mudéjar architecture while enjoying a laid-back boating adventure.
Open In Google Maps
Avenida Isabel la Católica, Sevilla, Andalucía, 41004, Spain
Visit Website
Give us feedback
Give us feedback