Most Impressive Buildings in Mallorca, Spain

Bellver Castle, Mallorca | © Random_fotos / Flickr
The history of Mallorca is long and diverse, spanning the Neolithic period through to Phoenician, Roman, Byzantine, and Moorish times – not to mention the Medieval and Modern Spanish eras. With each civilisation leaving their mark in architectural form, the island certainly has no shortage of majestic and magnificent buildings. Here’s our pick of the most impressive examples.

Cathedral, Church, Mosque
La Seu Cathedral, Mallorca | La Seu Cathedral, Mallorca
Book Now
It is said that James I of Aragon vowed to build the cathedral when he ran into troubled waters on his way to Mallorca. He promised that if he landed safely and conquered the island, he would dedicate the church to the Virgin Mary. Construction actually began after his death in 1229 on the site of Moorish era mosque and also atop the former citadel of the Roman city, previously called Palmeria. It took over 400 years to finish, was later added to by Gaudí in the early 20th century, and remains the most impressive and recognised architectural gem on the island.
More Info
Open In Google Maps
Plaça de la Seu, Palma, Spain
+34902022445
View menu
Visit website
Visit Facebook page
Send an Email
Give us feedback

Cathedral
La Almudaina Royal Palace | La Almudaina Royal Palace
Close to the sea front and just next to the cathedral lies the fascinating Royal Palace, still used to this day by the King of Spain as a residence for official summer ceremonies. The palace we see today is the result of modifications made to the Muslim fortress constructed in 1281 and became the seat of the independent kingdom of Mallorca during the reign of Jaime I onwards. It still contains the original baths and hot and cold rooms from the Moorish era. There is a range of incredible tapestries throughout the Palace as well as furniture from various periods of history.
More Info
Open In Google Maps
Carrer del Palau Reial, Palma, Spain
+34971214134
View menu
Visit website
Visit Facebook page
Send an Email
Give us feedback

Museum
Can Prunera is an expertly-restored Art Nouveau mansion in the beautiful town of Sóller. A combination of sinuous, natural and animal-like shapes make the building unique and a must-see when in the area. Functioning as a Museum of Modern Art, it houses work by artists such as Kandinsky, Picasso, Warhol, Miró, Lautrec, Klee, Léger as well as local artists Barceló and Martí and artists who have a connection to the island. The original features of the building such as the kitchen and refectory can still be toured.
More Info
Open In Google Maps
90, 86 Carrer de sa Lluna, Sóller, Illes Balears, 7100, Spain
+34971638973
View menu
Visit website
Visit Facebook page
Send an Email
Give us feedback

Originally a busy mercantile exchange and meeting place, this exquisite piece of architecture was built between 1420 and 1452 by Guillem Sagrera. Although very quick to walk around, it is certainly an experience. The ribbed vault ceiling is divided into twelve parts, each with its own spiral pillar resembling the palm trees lining the outside pavements. The lovely Angel Custodio was made by the architect himself and holds a band reading ‘Defender of Merchandise’. Make sure to speak when you visit, if the hall is quiet, to experience the famous echo. 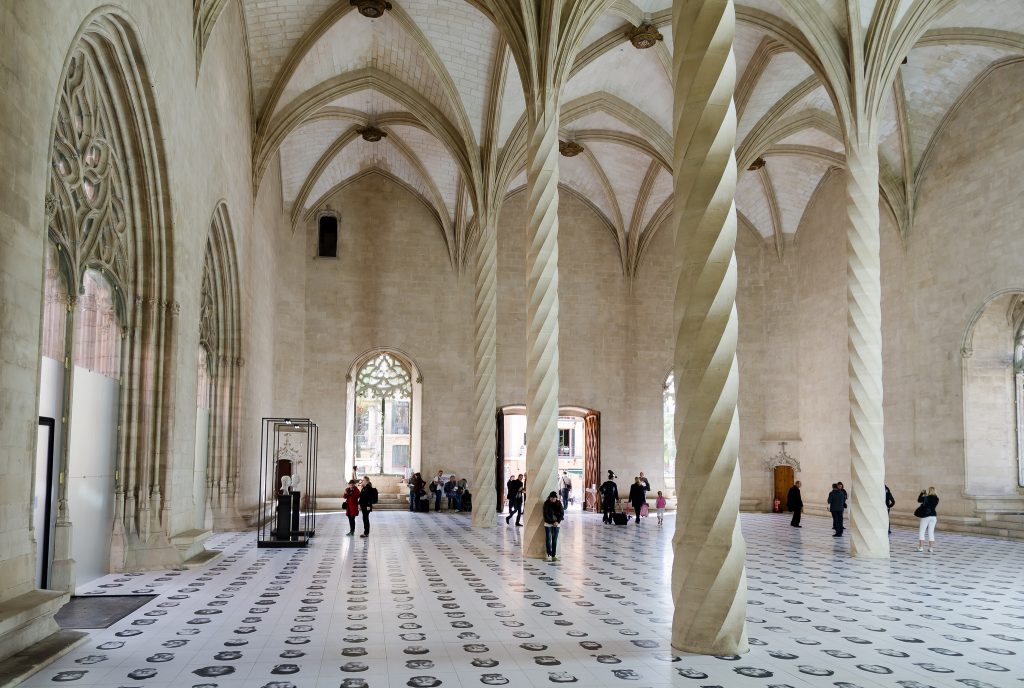 Building
What is now the new cultural centre in the heart of Palma has been owned by Palma City Council since 1982 and is the headquarters of the Municipal Archive. Built in the 13th century on the remains of a Moorish site, it was later owned by a Jewish family until 1450 when it was bought by Salvador Sureda. In 1647 it passed by marriage to the Bordils family whose name still graces the door, despite it being owned by other families of Mallorcan nobility. Inside it houses a permanent exhibition with explanatory panels telling the story of the history of the building, as well as offering art exhibitions and talks about the cultural history of Mallorca.
More Info
Open In Google Maps
9 Carrer de l'Almudaina, Palma, Illes Balears, 7001, Spain
+34971225963
View menu
Visit website
Visit Facebook page
Send an Email
Give us feedback

Library, Monastery, Museum
Real Cartuja Valldemossa | © Glen Bowman/Flickr
This Royal Monastery was originally a royal residence of Jaime II who built it as a palace for his son, Sancho. In 1399 it was donated to the Carthusian monks who occupied it until 1835. It is also where Chopin and George Sand spent the winter of 1838-9. Inside are museum collections on various themes, and you can still visit the old pharmacy where herbal remedies were made, as well as the library where the monks would meet for half an hour a week – their only human contact. There are also works of art by Miró and Ramos, while Chopin’s dwelling is also available to view.
More Info
Open In Google Maps
S/N Plaça Cartoixa, Valldemossa, Illes Balears, 7170, Spain
+34971612106
View menu
Visit website
Visit Facebook page
Send an Email
Give us feedback

Museum, Memorial, Historical Landmark, Archaeological site
The circular inner courtyard of the Bellveer castle, Mallorca | © Matteo Ceruti/Shutterstock
This fantastically well-preserved 14th-century royal fortress is accessible through the pine-scented woods of the surrounding hillside and has some of the best views in Palma (‘bellver‘ meaning ‘lovely views’ in Catalan). Initiated by King Jaume II in 1300 and built by the same architect as the Almundaina Palace, it is an architectural rarity in that it’s completely circular. For many years it was a prison, where Jaume III’s widow and sons were held briefly. Nowadays it houses Palma’s museum of municipal history, with artefacts from the Talayotic period, Roman, Arab and Medieval eras.
More Info
Open In Google Maps
s/n Carrer Camilo José Cela, Palma, Illes Balears, 7014, Spain
+34971735065
View menu
Visit website
Visit Facebook page
Send an Email
Give us feedback

Building, Church, Museum
This prehistoric site dates back to 900BC, and visitors can still see the remains of dwellings and towers. It is accessed through the Museum of Son Fornes which is housed in the Moli des Floret building, an 18th-century restored flour mill. As well as more prehistoric sites of interest nearby, in Montuiri the gothic church of Sant Bartomeu is also worth seeing for its impressive interior, as is the sanctuary of Santuari de la Bona Pau which dates back to 1395 and offers great views across the area.
More Info
Open In Google Maps
Ma-3200, Montuïri, Illes Balears, 7230, Spain
+34971644169
View menu
Visit website
Visit Facebook page
Send an Email
Give us feedback

Monastery
Located on Santa Clara street in Palma, the order has existed since the 13th century during the time of James I of Aragon. In 1256, at the request of Clarissa Sr Catalina, the abbess of the monastery of of Santa Maria Tarragona, they were given permission by Pope Alexander to found a new convent on the remains of a Moorish site. The Franciscans were commissioned to help the Clarean nuns to settle in the centre of Mallorca. In the 17th century, parts of the original Gothic structure were replaced with post-Renaissance and Baroque-style decoration. The convent was completely restored in 2007 and contains many treasures of interest.
More Info
Open In Google Maps
2 Carrer de Can Fonollar, Palma, Illes Balears, 7001, Spain
+34971710061
View menu
Visit website
Visit Facebook page
Send an Email
Give us feedback
Book with our partner and we will earn a small commission.
Give us feedback