Most Beautiful Buildings in Valencia

Most Beautiful Buildings in Valencia

La Llotja de la Seda's Hall of Columns ceiling © Rafesmar/WikiCommons
Valencia is packed with gorgeous architecture from all periods, influenced by everyone from the Moors to the Romans. A walk around the city’s Old Town is a feast for the eyes, but there’s plenty of amazing architecture elsewhere in the city, too. Here’s our guide to the Valencia’s most spectacular buildings.

You really can’t miss this one, but luckily it’s right in the center of town. This gorgeous medieval silk market was built as a display of Valencia’s wealth at the time, and now it’s famous as being one of the few examples of non-religious Gothic architecture in Europe. It’s actually one of the most important buildings in the city, and a UNESCO World Heritage Site. A look inside is time (and a couple of euros) well spent. The interior is designed to represent paradise, with its soaring columns symbolizing palm trees reaching for the sky – or roof – originally painted blue but now scrubbed clean. Less pleasant but equally fascinating are the stone gargoyles perched all over the building’s exterior.

Bazaar, Market
Jaser Cervantes / | © Culture Trip
Fans of the Modernist style will like this National Monument in the city center, designed by Valencian architect Francisco Mora Berenguer and completed in 1916. It was originally a market for fresh produce, but now the market stalls are long gone. Instead the space has been renovated and now contains several chic cafés, a flower stall and, sometimes, a stage for live music and other events. Downstairs you’ll find an upscale foodie shop selling fancy charcuterie, cheeses, wine, and oils.
More Info
Open In Google Maps
19 Carrer de Jorge Juan, València, Comunidad Valenciana, 46004, Spain
+34963371101
Visit website
Give us feedback

Aquarium, Building, Concert Hall, Architectural Landmark
City of Arts and Sciences, Valencia | © Pixabay
As well as architecture from various periods in history, Valencia is also home to the ultramodern. The work of architect Santiago Calatrava may not be to everyone’s taste, but whatever you think of his style, this complex of futuristic buildings is a must-see during any visit to Valencia. Stroll through the green gardens and choose your favorite of the buildings; if there’s time, explore inside and you’ll find everything from interactive science exhibits to a huge aquarium and a world-class concert hall. Ciudad de las Artes y las Ciencias, Av. del Professor López Piñero, 7, Valencia, Spain, +34 902 10 00 31
More Info
Open In Google Maps
7 Avinguda del Professor López Piñero, València, Comunidad Valenciana, 46013, Spain
+34961974686
Visit website
Give us feedback

Train Station
As the main train station for the city, this might be the first building you see when you arrive in Valencia. It was declared a Historical Artistic Monument in 1961. It was completed at the beginning of the 20th century, and walking into the entrance hall today feels like stepping back in time. Take a look inside the shops at the side of the entrance hall to admire the impressive original-tiled walls.
More Info
Open In Google Maps
25 Carrer d'Alacant, València, Comunidad Valenciana, 46004, Spain
+34912320320
Visit website
Give us feedback

You might not expect the place you buy stamps from to be quite this fancy. The main post office building is actually a palace, and it looks the part. With its impressive dome and grand interior, this could be the most elaborate post office you’ll ever visit. And it’s still being used for its original purpose today. The palace was inaugurated by King Alfonso XIII and Queen Victoria Eugenia at the beginning of the 20th century and was completed in 1923. 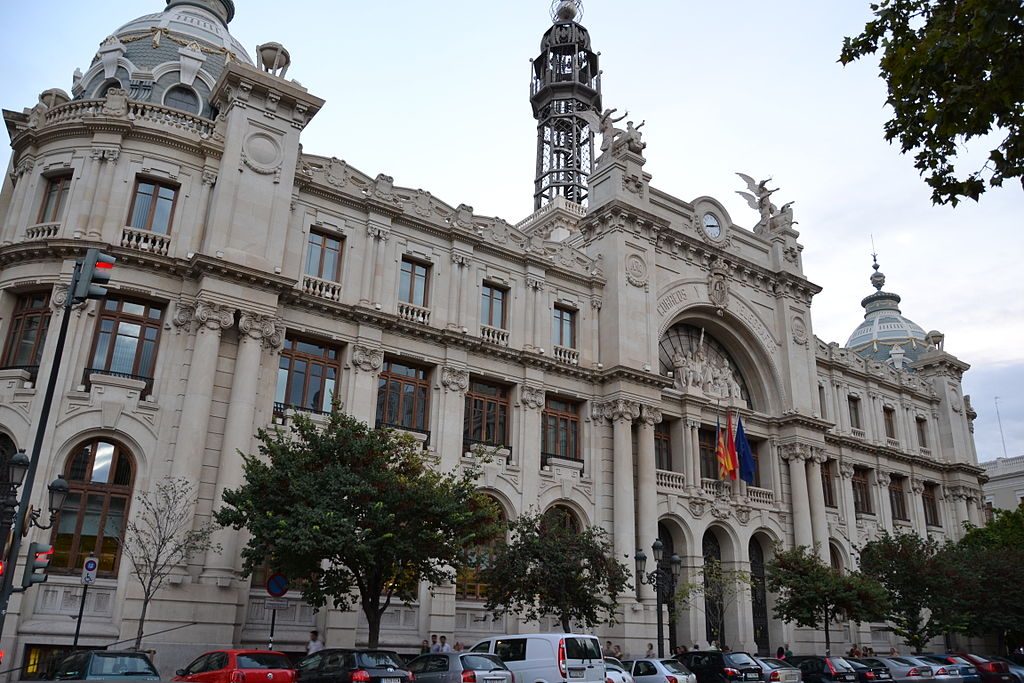 More Info
Open In Google Maps
Give us feedback

Building, Market
Mercado Central, Valencia | © Diego Delso/Wikimedia Commons
Across the road from La Lonja de la Seda you’ll see the huge 1920s’ Central Market. The building itself is interesting because of its grand dome and traditional Valencian ceramic tiles, but a look inside is a must for any foodie and one of the top food experiences in Valencia. This market, said to be one of Europe’s oldest, boasts around a thousand stalls piled high with oranges, cheese, jamón and fresh seafood. It’s packed each day with mostly local shoppers picking up their fresh produce.
More Info
Open In Google Maps
s/n Plaça de la Ciutat de Bruges, València, Comunidad Valenciana, 46001, Spain
+34963829100
Visit website
Give us feedback

Building, Museum
Marques de Dos Aguas | © Dorieo/Wikimedia Commons
Another of Valencia’s 15th century treasures (although it was renovated in the 18th century) this lavish palace was originally home to a local aristocratic family. Today it houses the National Museum of Ceramics, with its incredible artifacts telling the story of Valencia’s history and customs. The exterior of the building itself is worth a look, decorated with incredible marble textures and pastel colors.
More Info
Open In Google Maps
2 Carrer del Poeta Querol, València, Comunidad Valenciana, 46002, Spain
+34963516392
Visit website
Give us feedback
Give us feedback