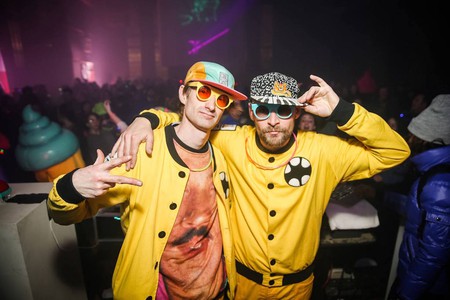 Ever wondered what the internet might look like if it suddenly came to life? Well, Barcelona-based art collective Hungry Castle might be able to shed some light on the matter. Having caught the art world’s attention for projects such as Laser Cat and Lionel Richie’s Head, we asked them about their latest project, Mr. Poopie – a homage to that little brown emoji you never quite know how to use.

So, what exactly are you Hungry Castle? An art collective? A fashion brand?

We make fashion and art. F(art) for short. The art is free. Climb inside one of our sculptures or fire one of those bad-ass lasers. For free. The clothing is our gift shop. If you like this shit, take a souvenir with you and share our story. In the end what is fashion? It’s art for your sexy body. It’s about telling a story. Making a statement. Sharing a feeling. On your sexy body. We make art you can wear (on your sexy body). 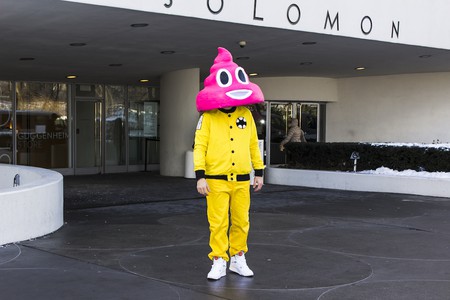 We were in Washington DC with our sculpture titled Laser Cat. Firing lasers off into a crowd of eager fans in an abandoned warehouse by the docks. Someone snuck up behind me on our little podium stage and said “shit guys, you’re the internet in real life.” It was one of those moments. We are the internet in real life but we didn’t even know it at the time. Sometimes it takes that outside perspective, that balcony view to see what’s really going on. That guy literally wrote our tagline.

The internet is everything. We spend a lot of time there (we all do). We like the things that make us laugh. Celebrities with their heads cut off. Cats with lasers superimposed onto their eye balls. Big spinning poop emojis. We take these memes, these micro-moments in internet history and make them real. We do it because it’s funny. We also do it because it resonates with people. There is always an instant affection for our work because it’s recognisable. It takes you somewhere you have already been but often in an unexpected way. 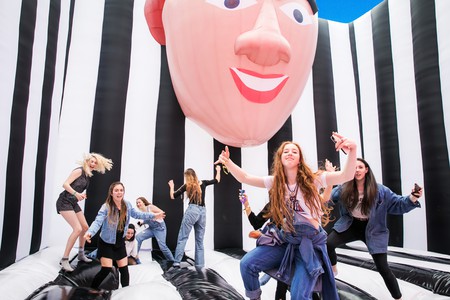 What do you think the relationship between internet and pop culture is? Are they synonymous these days?

Internet is the new pop. It used to be Pop Art. Now it’s internet Pop Art. It’s ubiquitous and it’s here to stay (well for a little while, anyways). 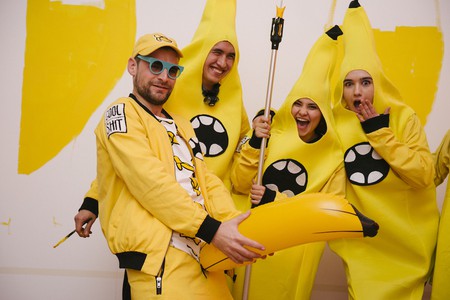 From what we’ve gathered, the fashion element came about to support the art element. Is that still the case? How does one inspire the other?

The fashion element was literally created to support our kickstarter project. It was an accident really. We knew we wanted to build a giant inflatable sculpture of Lionel Richie’s Head. We just didn’t have the money to make it a reality. At that stage we didn’t have a name for ourselves either, so unfortunately nobody wanted to give us the money to make a giant inflatable Lionel Richie head (well not in one go anyway). So inspired by the internet, we turned to the internet and floated the idea on kickstarter to see what would happen.

People loved the goal. But it wasn’t going to fly unless we had some ridiculous prizes. So we made these all over print tees with Lionel’s big noggin all over them. Like this big fuck off head on your chest just screaming “hello” to the world. People loved the tees as much as the goal and we raised just under 10k sterling in a couple of days. 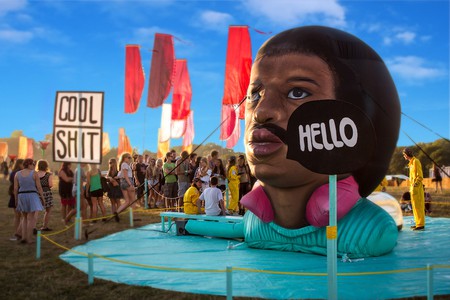 Your first project was the inflatable Lionel Richie head. What’s the story there, how do you choose your characters?

Lionel memes are the foundation of the internet. They all relate back to this terrible video directed by Bob Giraldi and filmed in the 80s. Lionel falls in love with a blind girl, she in turn makes a sculpture of his head (but she’s blind so it looks kind of scary). We’ve all been there. Our sculpture is a tribute to that moment. The twist is you can climb inside his brain and listen to him sing “hello, is it me you’re looking for?” from the cranium telephone. 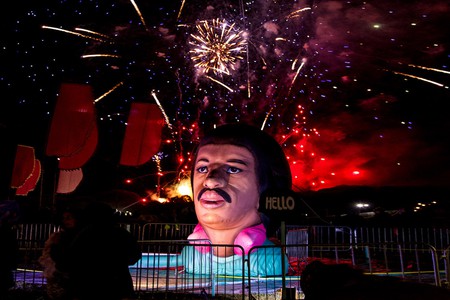 Tell us about Laser Cat. What was it like to collaborate with so many other artists on one project?

Laser Cat was our big break. Standing on the shoulders of giants. Superstar designers and artists such as Stefan Sagmeister, James Victore, Jon Burgerman to name a few we were able to harness the interest of the creative community and travel the world with our big pussy.

The initial videos that featured these celebrity designers were a call out for peoples raw art. We didn’t care if they painted like Michelangelo or simply took photos of their cats. Laser Cat, the democratic feline was there ready to eat it up and project it onto the moon through his laser beam eyes. We never made it to the moon, but we did shows in Miami, DC, NYC, Barcelona, Geneva and Paris.

The sculpture is still on tour, although he did get stabbed at his last show in El Paso, Texas. I’d say he has about four lives left. 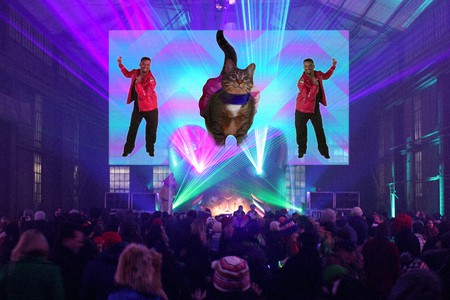 Your latest sculpture is called Mr Poopie. Who is Mr Poopie and what can we look forward to seeing from him?

Mr Poopie is inspired by that little brown poop emoji on your phone. The funny thing about that little guy is a lot of people think he is a smiling ice cream. Like… quite literally. So we wanted to make something that played with that confusion. Is it shit? Or is it Ice Cream? Mr Poopie is obviously both. You can climb inside his mouth and have a deliciously fresh ice cream served to you in a miniature toilet (pink, of course).

The tour started in Brussels. Last week we did Splendour in the Grass, Australia. Where we literally had a three hour queue all day everyday to climb inside the beast. In September we’re going to take him to Mexico (OFFF MEXICO), followed by Rio de Janeiro, Washington DC and finally SXSW in Austin next March. Nothing locked in after March, but if any of your readers need a Mr Poopie in their lives they know where to find me. 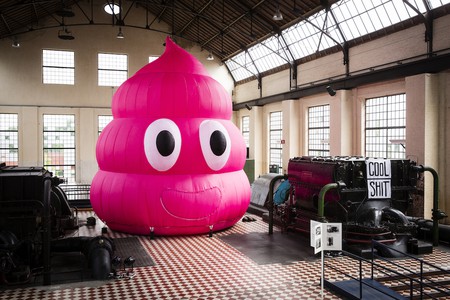 You’re based in Barcelona. Is that just coincidence or is Barcelona your spiritual home?

Barcelona is just one of those places. It’s rich history in art and architecture is a natural location for the birth of internet Pop Art. If Dalí were alive today we’d reach out to collaborate. 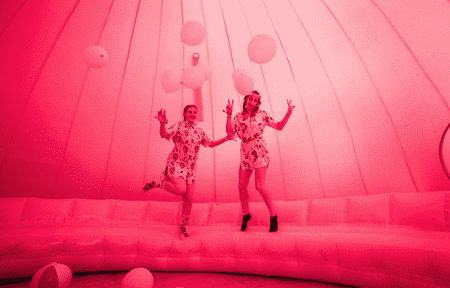 How cool are you really?

We’re not cool. We’re Cool Shit. Good art should be polarising. Sometimes what we do is COOL. Sometimes it’s SHIT. But it’s always cool shit. 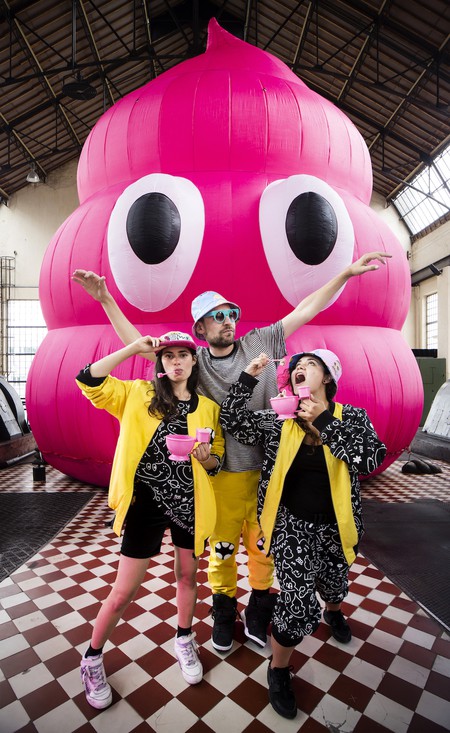 Courtesy of Hungry Castle
Give us feedback