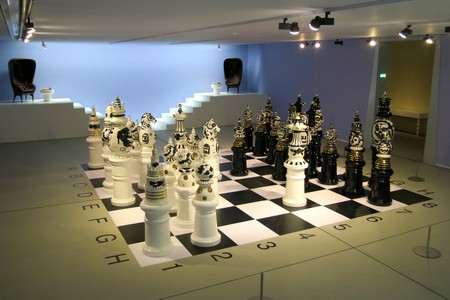 Instilled with a sense of Spanish passion, these ten designers and studios showcase the wide variety of innovative approaches to design practices and materials being applied in contemporary Spanish design. The extent of their applications, from monumental architecture to USB sticks, highlights Spanish designers’ broad spectrum of talents and international outlook. Interdisciplinary and bold, these designers hailing from Spain are ones to watch.

Luis Eslava, after studying at The Royal College of Art, London, along with one year at Camper and one season in Japan, decided to establish his studio in 2008 in Spain. His aim was to understand design from a comprehensive point of view, with training in different disciplines of design, in which the ‘making’ in the creative process is key. As a designer, Eslava has shown an innovative approach to materials through projects such as Face to Face 2006 for Almerich (a prominent lighting company in Valencia). This lighting collection, made from Velcro, demonstrates the designer’s interest in creating new applications for materials that usually remain hidden. His 2005 project Maria USB acknowledges the rise of digital society and aims to re-create a human connection with everyday technology with the tongue-in-cheek suggestion that “there’s no one better than Virgin Mary for keeping our prized data safe.” The studio collaborates with companies such as LZF-Lamps, Spain Sancal, Tombow Japan, Velcro(R) brand, Martini Russia, TFK Kuwait, amongst many others. 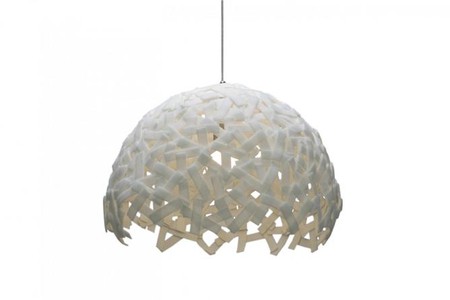 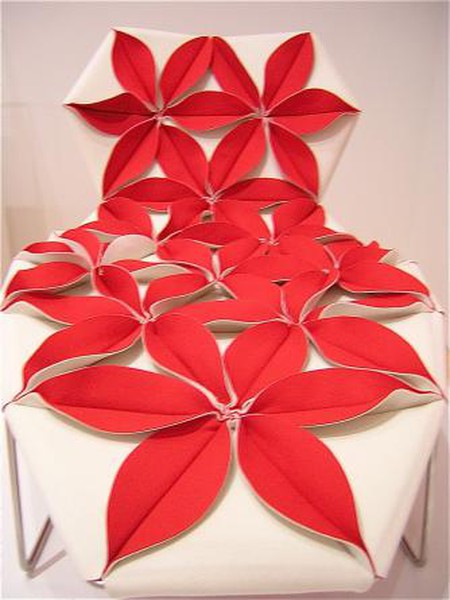 Architect and designer Patricia Urquiola began studying architecture at the Technical University of Madrid. She designed her first furniture pieces in 1991 whilst working for furniture company De Padova (Milan). She has continued her interdisciplinary practice ever since, working as an academic and designer under her own name. Her practice spans product design, architecture and displays. Urquiola always considers the impact her designs will have on the public and the user. She aims to encourage positive feelings and interaction with creations such as the Caboche lighting collection, which has been designed to emit the maximum amount of light with the minimum amount of glare. Although living and working in Milan, Urquiola maintains a strong connection with her Spanish origins.

Founded by architectural team Joaquin Torres and Rafael Llamazares in 1996, A-Cero has a strong, recognisable presence in residential architecture. Their monumental designs inspired by the classical architecture of Corbusier and Mies van der Rohe, as well as the minimalist designs of Ignacio Ramos and Jose Antonio Vicens, have a unique style regardless of their type or material construction. Each design follows the studio’s philosophy that function is as important as form and that when designing an architectural structure you must always consider the ‘why’ alongside the ‘how’. In this manner, the team keep a close watch on each concept behind their designs from start to finish. A-Cero produce designs for residential structures such as Balcony House, store interiors for brands including Spanish fashion label Often, as well as domestic products. Their extensive international client base includes Citroen, L’Oreal and Travelodge. 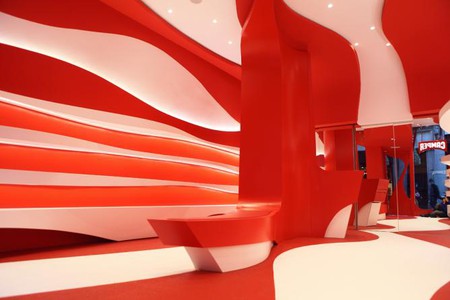 Spanish designer Hector Serrano founded his own studio in London in 2000, but maintains his Spanish identity despite having lived and worked abroad for many years. His designs combine innovation with the communication of familiar ideas in new and unusual ways. His studio practice is split into Product and Laboratory work, which allows Serrano and his team to conduct material research projects whilst questioning new design formulas. With an extensive client base, he has produced designs for Gandia Blasco, ICEX Spanish Ministry of Industry, Tourism and Trade and Droog. He has exhibited at prestigious museums such as the Victoria and Albert Museum, London and is collected by the Central Museum, Amsterdam. Serrano’s studio has received a variety of awards, including Designer of the Year 2009, and 2nd Prize in the New Bus for London Competition for its collaboration with Miñarro García and Javier Esteban. 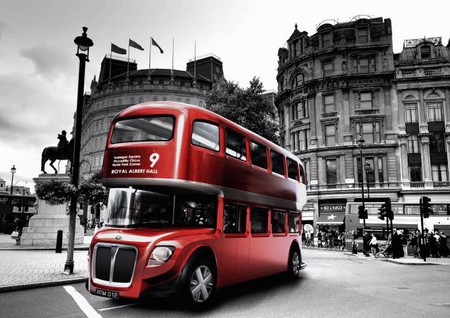 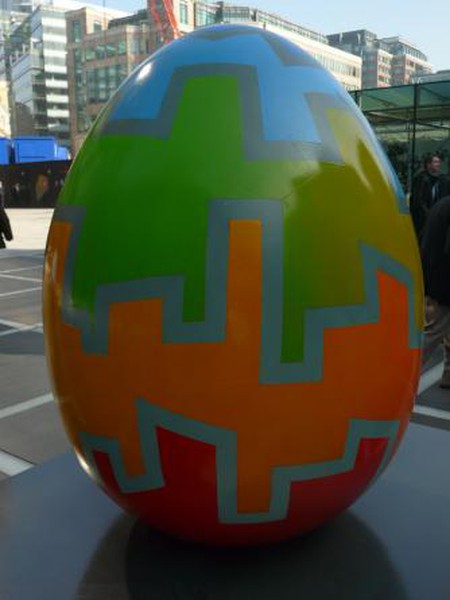 Cristian Zuzunaga splits his time between London and Barcelona. From an early age, he has expressed a desire to explore new ways of defining his place within the working world. His work is heavily inspired by science; as a biology student, he was particularly interested in microscopic imagery. Although he chose a career in design over science, his interest in how microscopes magnify and break down objects into their smallest components remains, expressing itself through his designs. Zuzunaga’s practice is extremely versatile, covering print, letterpress, photography, sculpture, textiles and furniture design. When creating new works, he chooses the form of expression that is most appropriate for the project. His distinctive use of colour is used to evoke emotion and to encourage interaction with our surroundings.

Nadadora is made up of design team Cristina Alonso and Isac Pineiro. Their bold, geometric designs such as ELEPHANT (for Spanish design company SANCAL) are based on conceptual honesty and simplicity, and give a sense of the precision and rigor that lies behind the studio’s design process. The team’s combination of specialities including graphics, furniture, lighting, product design and research enables them to form a truly multidisciplinary practice; their commissioned works have featured product and furniture design, print, art direction and occasionally interior and exhibition design. Although based in Valencia, this studio has an international outlook: Nadadora have exhibited in Milan, Helsinki, Seoul, Paris, New York and Tokyo. They also create works for Spanish and international clients including Almerich, Swarovski Elements and Nutella.

Jaime Hayon’s extraordinary design practice blurs the lines that divide art, decoration and design. He was named as one of the 100 most relevant creators of our time by Time magazine and has offices in Spain, Italy and the UK. Hayon states that “at a certain point I was absolutely not interested in [traditional design], so I went down a different road.” This path has led him to create designs that aim to bring back a renaissance in finely-crafted, intricate objects within the context of contemporary design culture. His studio creates furniture, products, interiors, sculptures and art installations, all the while conserving craft skills and challenging design principles. Projects including 40 Anniversary Vases for BD (Barcelona Design) also illustrate his humorous approach to design. Other clients include Baccarat, The Groningen Museum and Faberge. 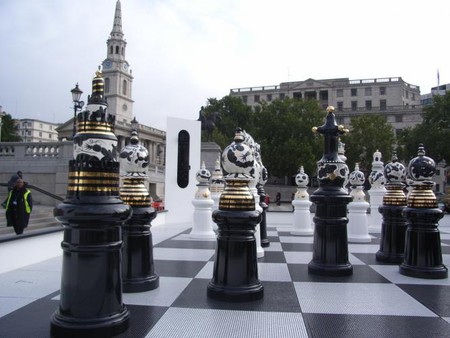 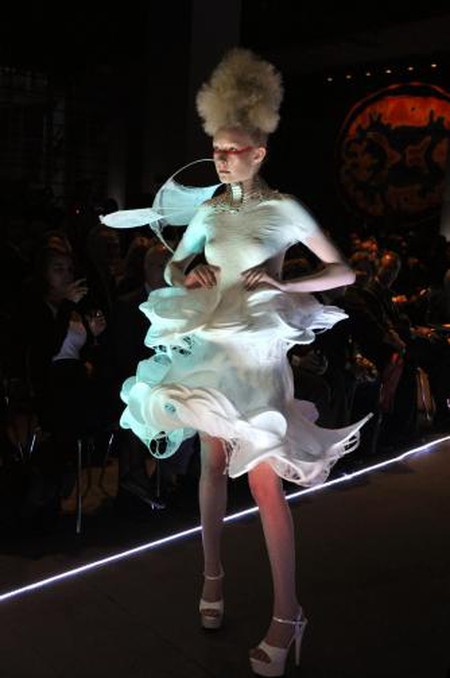 The idea for Manel Torres’ award-winning invention Spray-on Fabric was conceived between 1995 and 1997 whilst he was studying for an MA in Fashion, Women’s Wear at the RCA. Following a PhD, Torres founded Fabrican Ltd in 2003, where he is also Managing Director. At their research and development facilities at Imperial College London, Fabrican Ltd engage in crossing the interrelating disciplines of science and design. The idea for Spray-on Fabric came from a desire to speed up the process of constructing garments. The result was a material that fits the body like a second skin but has the appearance of clothing. Torres’ invention, although originally conceived for the fashion industry, has the potential to be applied to numerous markets including cosmetics, medical and automotive.

Founder of Arturo Alvarez Studio in 1994 and winner of the 2008 Good Design Award, Alvarez is dedicated to the design of decorative lamps with unique personalities created for both private and public environments. Although his studio operates across fifty countries around the globe, all their products are hand-made in Spain. Indeed, one of their principal aims is to revalue handcraft techniques and create a new design language through an innovative use of materials. Conscious about energy-saving issues in design, the studio’s research projects have included using and developing new, environmentally friendly materials. The studio has recently been accepted as a member of the Brands with High International Potential – MAPI club, an initiative of the Leading Brands of Spain Forum created to support brands that have the greatest possibility of succeeding abroad.

Odosdesign was founded in 2005 by fellow graduates in Industrial Design from UPV Valencia, Luis Calabuig, Maria Mengual and Ana Segovia. The design team view the designing of new products as an on-going, daily process. Their products reflect the needs and styles of each individual project and are influenced by the designers’ everyday experiences and responses to their surroundings. Odosdesign products are specifically conceived to be long-lasting and to go beyond current fashion trends. The team are involved in every process of design from initial conception through product development to communication and art direction. Their multidisciplinary approach culminates in designs that are communicative but without excessive ornament, such as Etnia (for design brand GAN).