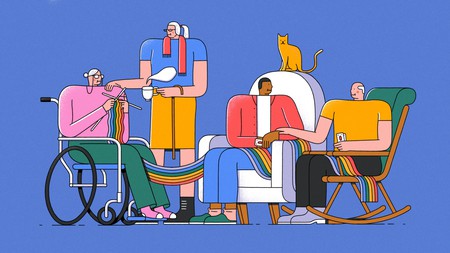 With a mission that goes far beyond providing dignified care for LGBTQ elders, the charity behind Madrid’s first ever council-funded LGBTQ retirement home is set to revolutionise Spain’s care system, breaking down prejudices every step of the way.

LGBTQ retirement homes are not a new concept. Such homes already exist in Germany, the US, Denmark and Amsterdam, but none of them are free. Madrid’s first LGBTQ retirement home has been brought to life with the support and funding of the local council, the first in the world to achieve such a feat. And it’s all thanks to Federico Armenteros and his charity, Fundación 26 de Diciembre. 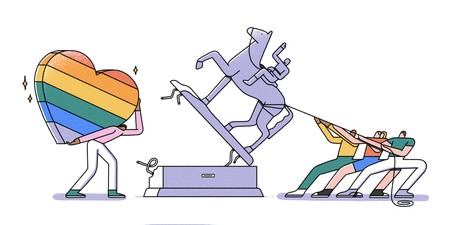 Over the past few years, the Spanish capital has built a reputation for being one of the most tolerant and open cities in the world, regularly topping gay-friendliness polls and attracting millions to its annual Pride celebrations. Rainbows always shine down on Madrid’s designated gay neighbourhood, Chueca – its cobbled streets have long been hailed a safe space for the queer community, and rainbow flags hang from the town hall when Pride sashays in.

It’s a stark contrast from Franco’s days, when the Vagrancy Act and its later incarnation, the rebranded ‘Social Danger’ law, deemed homosexuality a crime. As recently as the 1970s, the Spanish LGBTQ community not only faced homophobia, but also widespread prosecution.

“The injustice of these laws, and their impact on the community, has yet to be recognised by the state. There hasn’t even been a plaque; nothing has been done to commemorate those affected,” Armenteros says. “We [the LGBTQ community] couldn’t benefit from the amnesty law. Amnesty was for political prisoners, but what were we? Dangerous. Who decided I was dangerous? The state. I didn’t steal. I didn’t do anything. But being myself was a crime.”

It wasn’t until 26 December 1978, three years after Franco’s death, that homosexuality was decriminalised in Spain – hence the name of Armenteros’ charity. The Fundación 26 de Diciembre is dedicated to making LGBTQ elders visible, particularly those from impoverished backgrounds. And, considering the obstacles they faced finding work and their resulting meagre pension schemes, there are many.

Armenteros has faced many obstacles along the way. “They thought we wanted to build a ghetto,” he says, laughing. Coincidentally, that’s exactly what 71-year-old painter Pedro-Antonio Beguería Latorre calls it when asked about the retirement home.

“It’s a great initiative for those who are interested; however, I believe it’s, in some ways, a gay ghetto. I don’t like ghettos. When I need care, and I hope I don’t need it for many years, I’m going to live freely in a council-funded home where I’m respected as a citizen and as a gay man,” Beguería Latorre says.

That’s exactly what Armenteros and his charity’s retirement home seem to be offering. It’s the culmination of more than 10 years of gruelling hard work – securing funding and support from the local council, fighting against the prejudices, ignorance and hatred so carefully nurtured by Franco’s regime and raising awareness of the needs specific to LGBTQ elders.

“There are many specific needs,” writer and gay-rights activist Javier Sáez del Álamo explains. As well as the usual vulnerabilities faced by the elderly, such as reduced mobility and social isolation, many older LGBTQ people may “experience trauma after a life spent in the closet or being assaulted and abused. Many have been in prison. In Spain, there is no reparative justice for these victims of Francoism, no acknowledgment, compensation or Historic Memory Law.” 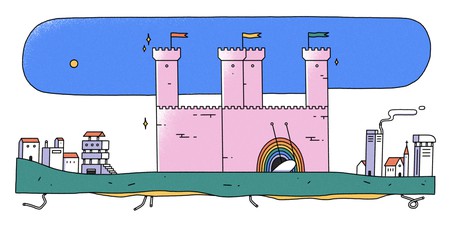 Sáez del Álamo, whose LGBTQ tube map of Madrid honours prominent figures in the community who suffered through such times, including Empar Pineda and Armand de Fluvia, believes “we don’t talk enough” about these issues.

Both Armenteros and Sáez del Álamo agree that there are different needs within the community, too. “Lesbians have been silenced and erased from the movement,” Sáez del Álamo says, while Armenteros points out that “the trans collective have it worse than anyone else”.

When LGBTQ people are placed in council-owned residential homes, they may feel like there’s no other choice but to go in the closet, Armenteros explains. “They may find themselves in a hostile environment. What if your carer or the fellow residents are homophobic?”

Armenteros’ retirement home will open its doors at the end of 2020, once the finishing touches are put on the building where it’s set to be hosted. It will offer 62 vulnerable LGBTQ elders access to dignified care, but it will also do far more than that. It could even revolutionise the entire system of care.

In order to green-light such a project, Armenteros and his team had to work to create a whole new legal infrastructure to support it.

In 2016, Madrid passed the Protection Against LGBTIphobia and Sexual Orientation Discrimination Act, which states that “we can’t leave behind the most forgotten by society, the LGBTI elders, who suffer great discrimination due to their age and belonging to a collective that has been harassed, criminalised and marginalised for decades.”

The home’s whole model of care is a combination of regulations specified by the state and an emphasis on creating a safe space that promotes diversity and intersectionality. But at its core, it aims to humanise a system that can sometimes feel like a production line.

“[The LGBTQ care home] is an experimental venture,” Armenteros says. “The existing regulations sometimes make it feel like elderly care is a production line, and it’s not. You don’t have to wake everyone up at 7am, have breakfast at a certain time, move on to the next task. We’re going to humanise that care.”

In order to ensure the home is a welcoming, safe space, the charity is creating a new module that will be required for all staff on top of the usual accreditation. “[Staff] need to know about diversity, how to work with it,” Armenteros explains.

And, of course, this centring of diversity will also be reflected in the hiring process. “We want to hire from within the community, particularly the trans community, who often face rife discrimination in the workplace,” Armenteros says.

It’s not that the home will have a neon sign declaring ‘No Heteros’. Aspiring residents will have to tick the box to mark their interest in the home, before the council determines their level of dependency. “There are few straight people who would like to work with us, just like there are few straight elders who would tick that box. It’s a problem for them, not for us,” Armenteros says.

Above all, what Armenteros wants the staff to have is a “love for building something new, of letting the person tell us how they want to be looked after”.