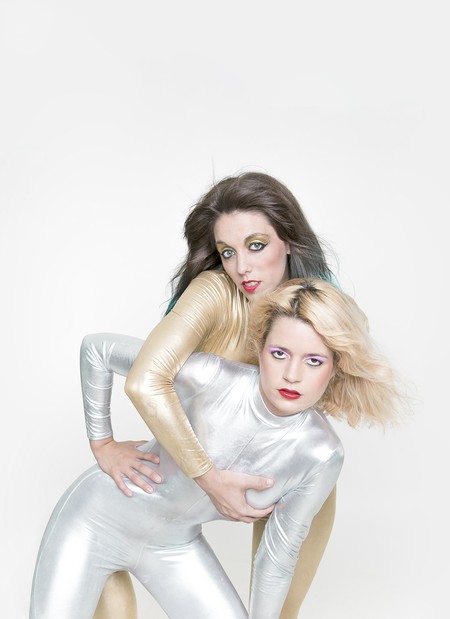 Hailing from the Catalan capital, Barcelona, Las Bistecs are the female musical duo composed of Alba Rihe and Carla Moreno. Having taken Spain’s musical scene by storm with their hits ‘HDA’ and ‘Universario’ back in 2014 and 2015, they released their first album in September 2016 after much anticipation from their growing fanbase. Find out why Spain is going mad for this quirky electro-pop all female act.

Watching one of Las Bistecs music videos for the first time you would be forgiven for imagining you were seeing something straight out of a Pedro Almodóvar film. From the hair to the make-up and costumes, everything about the group’s aesthetic shouts 80s kitsch, and it’s no surprise as the girls proudly take their inspiration from the Movida Madrileña – Spain’s counter-cultural revolution from the 1980s. However, listen to the lyrics of their songs and you’ll find that there’s nothing old-fashioned about their message: whether it’sdecrying the art world’s domination by men or reclaiming sexist dance moves, the duo have plenty to say.

While neither of the artists can quite remember where the name ‘Las Bistecs’ (Spanish for ‘fillet’ or ‘beef steak’) came from, it dates back to their time as students here in Barcelona. The two met at university in the city, rapidly struck up a friendship and a shared enjoyment of inventing their own songs and playing around with lyrics. Encouraged by their friends to record something, the duo released their first hit ‘HDA’, short for ‘Historia del Arte’ back in 2014.

Behind its danceable electro-pop melody the song asks why the history of art is so full of men and phallic symbols? Or as they put it quite simply in the lyrics: ‘Historia del Arte, penes con pincel‘ (‘History of Art, penises with paintbrushes’). As for their own aesthetic, unwilling to ascribe themselves to a particular genre, they coined their own: electro-disgusting. It can perhaps best be understood as electro-pop but with a fetish for the ugly, the disturbing and the provocative.

In interviews the artists explain that they wanted to do more with their songs then just make music, they wanted to speak out and share a message. Unsurprisingly perhaps, one of the most recurring themes in their songs is the role of women, although the duo are always reluctant to label themselves as traditional feminists (they once suggested they wanted to be ‘newnewfeminists’).

In their second hit ‘Universario’, Las Bistecs take on the world of reggae-ton and more specifically the ‘dance move’ known as ‘perrear‘ (which can roughly be translated as ‘to do the dog/bitch’) and for all intents and purposes is the same as ‘twerking’. Claiming the word as their own, the artists invite listeners to ‘perrear‘ like none other than one of history’s most famous female dogs: Laika the Soviet space dog.

Released in the summer of 2016, ‘Señoras Bien’ – an homage to ‘ladies who like to go to the Ritz but to Bingo too’ – was rumoured to be a critique of some of Spain’s leading female politicians from the country’s conservative Partido Popular. Not willing to deny the allegations, the artists explained that the song is also a tribute to themselves and everyone like them who tries to keep up appearances when they’re actually broke.

When news came that Las Bistecs were looking to crowdfund their first album the result was impressive: not only did they meet their target in a few weeks, they exceeded it by 235%. Some say money speaks louder than words and if that’s the case it seems that the group’s fans have spoken loud and clear. The Barcelona-based duo have already been featured on national television, how long before they’re invited to perform at one of the city’s world-famous music festivals?