Jose Lamarca: Inside the World of Flamenco

Judging by a fascinating exhibition currently showing at Granada’s Federico Lorca Centre, Argentinian photographer Jose Lamarca (b. 1939) possesses the ability to make himself invisible. The photos that have been collected and displayed under the title ‘Un Viaje Hacia el Flamenco’ (‘A Journey Towards Flamenco’) capture the last half century’s most famous and influential flamenco artists with a rare intimacy and honesty.

Lamarca’s achievement in this collection – which is free and runs until February 19th – is to remove barriers between viewer and subject, to give the former a sense of sharing a very private space with the latter. Considered as a whole, these photos provide an unprecedentedly intimate take on the greatest practitioners of a tradition, that stretches back centuries.

Flamenco was not Lamarca’s first choice of subject matter, as the title of this collection suggests. As a designer and photographer for a left wing magazine in Buenos Aires in the late 1960s, his work made him many enemies and eventually landed him in prison. Lamarca spent months behind bars without actually being charged with anything, before requesting extradition to Spain. It was in Madrid in the early 1970s that he shifted his focus to the arts, chronicling the beginnings of the Spanish National Ballet before turning to flamenco.

Of central focus in this exhibition are Lamarca’s photos of guitarist Paco de Lucia (1947-2014) and singer Camaron de la Isla (1950-1992), the most inspirational duo in flamenco’s modern history. His representation of these two great performers is completely devoid of photographic trickery or posturing, enabling him to convey aspects of their partnership, private lives and personalities with unfettered honesty.

A particularly compelling wall of photos in the exhibition’s second room focuses on the 1976 wedding of Camaron de la Isla to the beautiful Dolores Montoya – otherwise known as ‘Las Chispa’ or ‘The Spark’. It took place in the village of La Linea de la Concepcion in Camaron’s home province of Cadiz, and was a very private occasion, which only Lamarca was given permission to photograph. This is a privileged glimpse of the Gypsy flamenco world – a world mostly impenetrable to outsiders.

Perhaps the most arresting image is of five young Gypsy (‘Gitano’) boys at the wedding, ranging from about 12-16 years old. They pose with a faintly subversive air, staring defiantly into the lense, two of them with cigarettes hanging from their lips. Standing against a bare white wall, captured mid-party, Lamarca’s subjects radiate a rough vitality, an unmistakably Gitano edginess. In the corresponding image of six Gypsy girls (‘Gitanas’), your eye is drawn to a strikingly attractive young woman on the left. Darkly glamorous in a long black dress, she claps flamenco rhythms and appears to be singing as the other girls cluster around her. Flamenco, as these pictures show, was in Camaron’s family’s blood and was a way of life as well as an art and a profession. 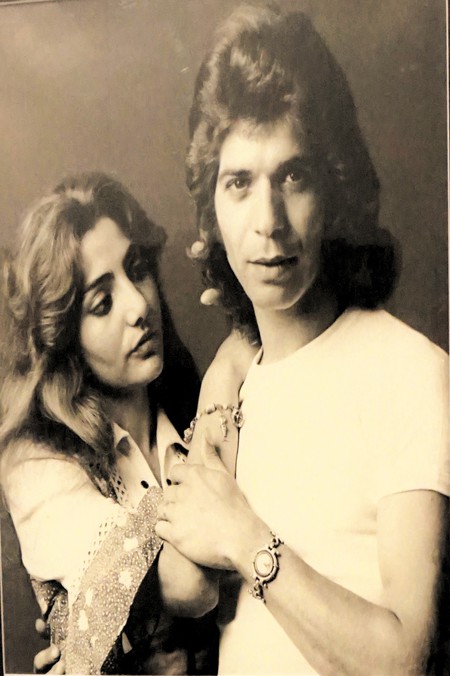 Camaron de la Isla and his wife as captured by Jose Lamarca; courtesy of Encarni Novillo

Flamenco as a profession

The third room features a series of images of Camaron de la Isla and Paco de Lucia taken between 1972-1979, and focuses on flamenco as a profession. In some of Lamarca’s most famous photos, the guitarist appears alone with his instrument and is absorbed in his craft, reminding you of the countless hours of practice Lucia’s flawless virtuosity required. The photos of Lucia and Camaron together are of a partnership and friendship that revolutionised flamenco: the two musicians are captured talking, smoking and sharing jokes as well as rehearsing. Their poses seem entirely natural and in some they appear oblivious of the camera’s existence – ultimate proof of Lamarca’s ability to disappear in even the smallest of spaces.