Interview With Lara Alcàzar, Leader And Activist Of Femen Spain 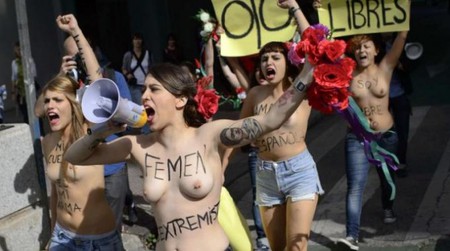 Lara Alcazàr, a 24-year-old from Gijòn, is the activist and leader of Femen Spain. The feminist movement, born in Ukraine but now active on a global scale, is well known for its use of the female body as a weapon of protest. We had the amazing opportunity to speak to Lara via email to go into more detail about her role in Spain, her values and her mission in the country.

Could you tell us the values, ideas, and attitudes which best describe yourself as an activist within the Femen Movement?

I was involved in feminism before I knew about FEMEN, but what I loved, and I still love, about this movement is the clear and direct way to act against all this patriarchal shit. Through sextremism, our protest method, we use women’s naked bodies to show the world how peaceful protests can evidence the violence against women and human rights. For me, a FEMEN action is more than just a body; it’s also a scream for freedom which is shaking the world from one point to another. With one image, we can denounce such important issues as Putin’s dictatorship, abortion laws in Canada or Spain, the corruption around Berlusconi, the homophobia of Morocco and its regime, or the fascist epidemic around France and Europe.
I think we are doing it, and we reached some kind of sisterhood and peaceful army at the same time, where every woman ‘can be a riot,’ where every woman can feel herself as a soldier of freedom and choose the fight to be proud of herself. 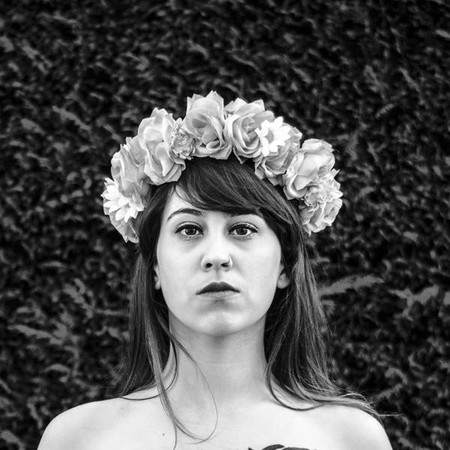 When did the movement first start in Spain? Could you tell us about your first protest and your feelings and hopes at that time?

The movement started in Spain in 2013. My first big protest was on the Spanish parliament, what we call Congreso de los Diputados. Me, Inna Shevchenko and Pauline Hillier were at the action; the protest was against the reform of abortion law in Spain. PP’s government wanted to forbid abortion for women even in case of malformation. In Spain, the socialist government approved a law for a safe and free abortion that we want to preserve. It was in all media and FEMEN won attention in all the country, not just about this problem but also about what FEMEN is and how we act and organize. For me, [it] was a very important step in my activity as a FEMEN member, and I will never forget. It was also my first detention, and I realized how to be strong and resist.
Did your friends and family support you from the beginning?

I am lucky because my family and friends have supported me since the first moment I started my activity as a FEMEN member. They were used to talking to me about politics, feminism, and religion, so let’s say it was not a big surprise to see me go on another level. But I have to say that, even if they were not supportive with me, I had decided to start my activism in FEMEN no matter what. It’s nice to have your dear friends supporting you, but this is all about you and your convictions and no one else.
What does it mean to be the leader of the Femen Movement in Spain today, in 2016? What are you fighting for? Who or what are the ‘public enemies’?

To be a leader of a FEMEN branch always means commitment and full dedication to be strong, face pressures and always be ready to act and answer all the questions around our protests. It means time and strength, not just physical but also psychological. Right now in Spain, we have a difficult situation with laws like Gag law that forbids protests and makes activists pay a big amount of money for demonstrating without the government’s permission. We have so many things to point here concerning freedom of expression and human and women’s rights, but sometimes we feel handcuffed, so we always try to find the way to disobey and break those chains. And we do it every time we have the opportunity. Today, we are focused here on fighting against Gag law, corruption, the rise of right wing parties, and violence against women. 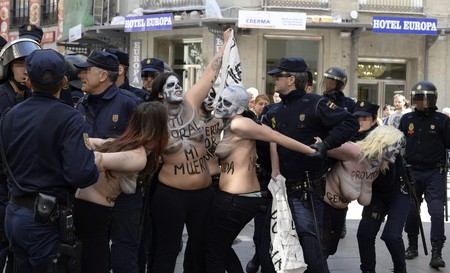 Femen began in Ukraine in 2008, but since then, it has been growing at an international level. What are the reasons behind its global success?.

The key of FEMEN’s success is its global message for women – freedom for all women, no matter what size you are, no matter in which country you live, which religion your society is praying to, no matter your sexual orientation, or economical situation. We can see now the difference and beauty between all the brave activists who are fighting in France, Italy, Canada, United States, Sweden, Mexico, Germany, Ukraine, or here in Spain. FEMEN is not just the image that patriarchal society wanted to spread about a white blonde Ukrainian woman without an objective; all those women, Ukrainians or not, blondes, brunettes, European or not, are strong women who are risking their lives, comforts and sometimes their own freedom for a humanistic cause.
Femen’s main goal, as stated publicly on your web site is ‘complete victory over patriarchy.’ What does that mean today in Western societies?

It means to destroy the society and the structure behind the system we know and build a new one from the notion of total equality without any kind of discrimination. For us, it’s the same giant we should fight here and in other parts of the world. The problems around women are the same but with different names all over the world; that’s why we talk about a victory over patriarchy.
Femen have used the female body as a weapon of provocation, but the actions have brought criticism as well. How has your ideology been misunderstood and why? Is that something you are worried about?

People usually identify a naked woman as a slut, as a dirty woman who just wants attention and attract men. That’s what patriarchy teaches us. People also used to identify a woman who is speaking out, screaming, even a political slogan as hysterical, following the Freudian tradition. That’s why the patriarchal culture tried to destroy FEMEN’s activity – because it’s automatically identified as a threat to the system. That’s why patriarchal structures are taking care of saying FEMEN has no point, has no ideology, has anything but bare breasts. It’s trying to reduce us, like always, to a simple naked body. We are more than a naked body. We are naked, but we are fighting, screaming, running, climbing fences, mocking dictators such as Lukashenko or Erdogan. The bodies they wanted to keep passive, just for their own pleasure, are now active, reactive, free bodies that don’t represent anybody’s honor or property. 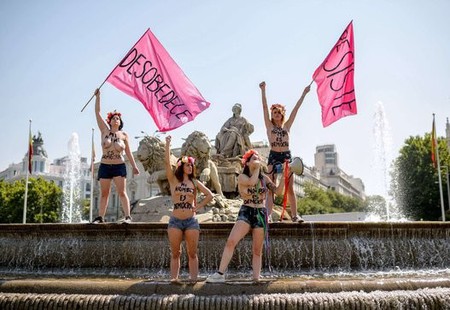 How did the public and the international press react after your recent protest against Rohani in Paris? What was your opinion about that reaction?

It was in all media, and we are very proud of it. When FEMEN makes an action, it is about making people react, express and take a position concerning an specific issue. Like in this case, we made a strong and radical action against Rohani’s Islamic dictatorship. I think most of the media and people in general, those who defend human rights, liked the action and shared a positive opinion about it. But the objective is not to please everybody or to do actions people will like. We are not here to please everybody but to share awareness about everything that is unfair, and it supposes also to not be liked sometimes. Truth is, it’s not always something people like. And our way to express truth is not pink but as bloody and radical as it is in the reality.
What do you think about the new generation, of girls in particular, often living more online than offline? Do you find it easy to reach them and spread your values and ideology to them?

Of course, social media and internet are very helpful tools to spread our message. The most part of our information, news, and communication is through the internet. Women join by email and activists talk by internet. Our pages, each branch has its Facebook page, are channels of information in very different languages that bring us the opportunity to make our information go straight to different parts of the world and different countries. We especially use Twitter and Facebook as they are the most used social resources and a lot of people find us there. If you are not there, you don’t exist. Those are the terms of contemporary society. Internet can be a beautiful tool to spread freedom and humanistic ideas if you use it in an intelligent way. I think that living online is positive for women, if we use it to unite, and know more about our rights and options to fight against sexism and discrimination – to know more; to learn; to empower ourselves and communicate, building a new generation of women from different parts of the world who share and collaborate to raise equality.
What are the next goals that Femen wishes to achieve, both in Spain and on a global scale? What should we expect?

We want to grow ideologically, and of course, we always want to have a larger number of activists. For example, we just opened a new branch in the United States, and they are staring their activity step by step. We want to cover the world with FEMEN warriors fighting peacefully for human and women’s rights, fearless and empowered. We will keep acting and surprising with new images, blasphemy and messages. This year, we published our international manifesto that is available in French and Spanish; it’s in bookshops of France, Spain, and now we know it is also available in Chile, Peru and Argentina and very soon in Mexico. We will keep updating our ideology and editing our texts every time we have the possibility to do it.