Inspiring Artists From Valencia You Need to Know 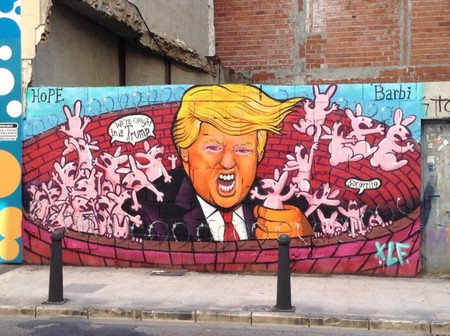 The art scene of Valencia is vibrant and several nationally important artists originate from the city. The city’s public galleries are home to works by Valencia-born artists dating from the Renaissance to the present day. Outside, the city is an open-air gallery of street art and murals, with some famous names regularly making new work that is both visually stimulating and socially and politically challenging.

Spanish daily life and the sparkle of the Mediterranean sun is best captured by the Valencian impressionist Joaquin Sorolla (1863-1923). In 1911 he undertook a major commission to capture his ‘Vision of Spain’. For this, Sorolla travelled to every region of the country and posed models dressed in local traditional costumes alongside theatrical props and horses. He painted en plein air and completed 14 immense canvases which now hang in the Hispanic Society of America, Manhattan. But here in Valenia you can appreciate his earlier career as a society painter in the permanent collection of the Museo de Belles Arts. Sorolla captured his wealthy patrons with such vivacity that they appear ready to break into a smile or offer you a warm handshake. He was clearly inspired by the introduction of photography and utilised unusual compositions to suggest fleeting glances, moments on the street or his own downward gaze, as a concerned and loving father, in the portrait of his ailing daughter. The exhibition is accompanied by a short multilingual video detailing his creative life.

The work of Ignacio Pinazo (1849-1916), a fellow Impressionist also born in Valencia, suggests life was not always as jubilant as Sorolla would have us believe. His works are darker, both in his choice of palette and the sobriety of his subjects. You can see his exquisite sketches of rural Spanish life, juxtaposed amongst works by other artists at the city’s modern art museum, the IVAM. Running the length of this subterranean gallery is a well-preserved section of the original city walls of Valencia, dating back to its Medieval heyday.

The IVAM also houses the world’s largest collection of sculptures by Julio Gonzalez (1876-1942). Originating from Catalunya, just north of Valencia, Gonzalez is considered one of the leading sculptors of the twentieth century. His prickly, welded sculptures are as brutal as they are elegant. Each sculpture is beautifully illuminated in the gallery, throwing peculiar abstract shadows. Showing his background in a family of jewellers, his works include ‘drawings’ on sheet metal that are as delicate as paper cuts and folded card. The influence of his friendship with Picasso becomes evident in his masks and powerful sculptures that convey the horror and destruction of the Civil War. 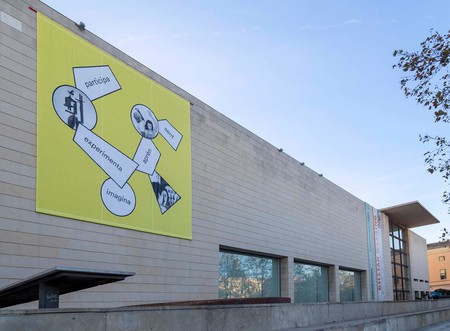 A car appears to tumble down one blank wall of Plaza Tossal. Known for his distinctive ‘minimalist’ style Escif, the Spanish ‘Banksy’, is much loved throughout the city. Escif has collaborated with fellow street artist, Hyuro, who invites us to reflect on the mundane monotony and occasional cruelty of city life. These artists share a minimal palette of greys, whites and ochre but their works are equally powerful, yet subtle. An immense portrait of Moses, specifically of his chin and a beard of seething snakes, covers the adjoining wall. Created by an artist known as Blu this iconic work is a landmark in the city and is typical of his commentary on the global economic crisis.

An artist known as Brbi has dotted the area with works featuring pin bunnies, often commenting on their situation with speech bubbles in English or Spanish. JULIETA XLF meanwhile transforms the walls of the city into a playground of morphing shapes and joyful heroines. She employs a strong Japanese aesthetic and her delightful use of colour injects a burst of happiness into the fashionably shabby streets of the El Carmen neighbourhood where you’ll find her works.

When you encounter the work of street artist Diah you may think of Damon Alban’s Gorillaz album artwork. Diah, inspired by sci-fi comics and hip-hop music, transforms blank walls into portals to distant intergalactic realms. Dark-faced time travellers, equipped with gigantic headphones, are frozen against backgrounds of colourful shards and debris.

As you discover these incredible and ever-changing murals, you come to recognise one face in particular. A thin black character with a large lozenge-shaped head, disguised in a black balaclava, is emblematic of Valencia. This cheeky ninja is the work of David de Limon and he pops up everywhere. It’s a fun hunt to see how many you can spot in a day! 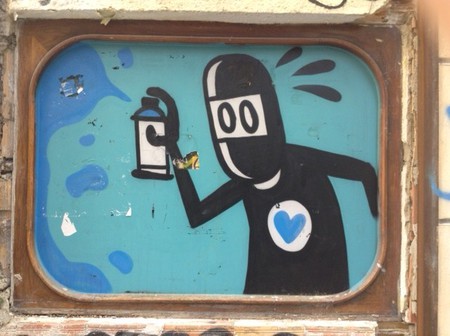 The biggest group of artists in Valencia are extremely well known but difficult to name individually. These artistas-falleros design and realise the extraordinary sculptures for the city’s huge Las Fallas festival in March.

Dating back to the Middle Ages the festival has just been awarded UNESCO heritage status. The aesthetic of the 350 sculptures populating the city for the festival week has subtly changed over the years. The Fallas Museum is the best place to see these works, which up to the 1970s were starkly divided between being either remarkably realistic or bizarrely surreal. Salvador Dali designed one such Fallas sculpture in 1954. 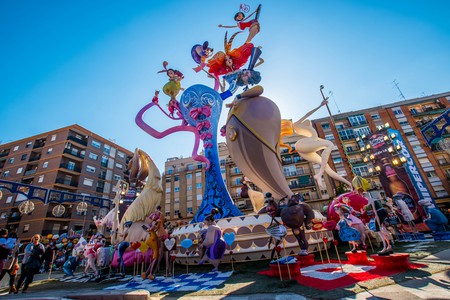 In recent years an increasing use of polystyrene and computer aided design has allowed artists to work on an ever-bigger scale. The style has become exaggerated and cartoony, reminiscent of Manga and Disney’s Jessica Rabbit, but has lost none of its satirical sting. Top artists occupy the prime city-centre sites and create the larger Fallas Especial. If you can visit during the festival, stop by Plaza del Pilar, Carrer del Sueca-Literat Azorin in Ruzafa and Plaza de Ajuntamiento to ensure you’ve seen the biggest and best.