The Most Impressive Buildings in Almería, Spain

Almería's mighty Moorish fortress | © Jebulon/Wikimedia Commons
The Spanish city of Almería is full of gorgeous architecture, from its spectacular 10th century Moorish fortress to the shiny red building that once housed the city’s first department store. With so many sites to visit, we’ve created a list of the city’s most impressive buildings you won’t want to miss.

Cathedral, Church
The facade of Almería's 16th century cathedral |  © Steve Slater/Flickr
Almería’s beautiful 16th-century cathedral is located on a quiet, palm tree-lined square in the heart of the Old Town. Built in Gothic and Renaissance styles during the mid-16th century, it is unique in Europe for being the only cathedral that was used for defensive as well as religious purposes. The Plaza de la Catedral was most recently used as a filming site in the 1970 World War II classic Patton.
More Info
Open In Google Maps
8 Plaza de la Catedral, Almería, Andalucía, 4001, Spain
+34687210390
Visit website

Almería’s elegant Renaissance town hall building (ayuntamiento) can be found on the Plaza de la Constitución, a spacious square that has been used for everything from Arab bazaars to bullfights throughout the city’s history. Admire its smart red-and-yellow colour scheme, attractive clock tower and its stately balconies, from which many local politicians and visiting dignitaries have looked down to the bustling square below.

Park
This striking building will appear on your left if you’re walking west to east through the leafy Nicolás Salmerón Park. It was constructed in 1900 as an iron warehouse and in 1913, a wealthy Cartagenian entrepreneur converted it into Almería’s first department store. Its brilliant red-tiled walls are particularly attractive as they catch the morning sun.
More Info
Open In Google Maps
Carretera de Málaga, Almería, Andalucía, 4002, Spain
+34950210000
Visit website

If you approach Almería from the west on the coastal motorway, one of your first sights of the city will be its majestic 10th-century Moorish fortress, or Alcazaba, perched on a stony hill far above the city. Its forbidding walls and towers almost look like natural extensions of the pale rocks underneath them and offer visitors some wonderful views over the Mediterranean and the city’s rooftops. 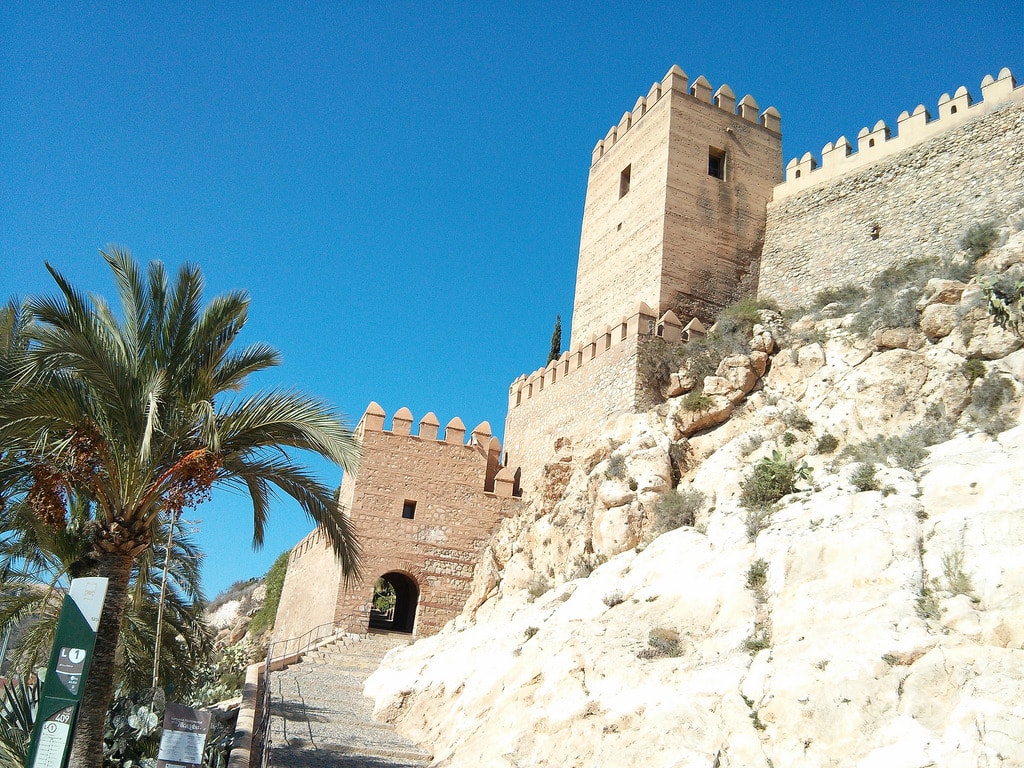 Building, Church
Built on the site of a former convent in the late 18th and early 19th centuries, the Parroquia de San Pedro Apóstol is one of the finest examples of neoclassical architecture to be found in Almería. It sits unassumingly on a square of the same name (which was designed around the church in the mid-19th century) and provides a marked contrast to the modern building next to it.
More Info
Open In Google Maps
2 Plaza de San Pedro, Almería, Andalucía, 4001, Spain
+34950230803
Visit website

Train Station
Almería Railway Station | © Matías!/Flickr
If you’re arriving into Almería by bus or train, you won’t have to wait long to lay your eyes upon one of the city’s most attractive buildings. Opened at the end of the 19th century, the Old Railway Station is visually arresting with its imposing iron, glass and brick facade. The first train line to run from here connected Almería to Gaudix in Spain’s Granada province to the north.
More Info
Open In Google Maps
Almería, Andalucía, 4006, Spain
+34902432343
Visit website

Though you may not agree with the ethics of the Spanish spectacle, the bullrings of Spain’s major cities are usually worth visiting for their architectural beauty alone. This is certainly true of the Plaza de Toros in Almería, which was finished in 1888 and displays an eclectic mixture of styles. Every summer during Almería’s annual feria, it is the venue of several prestigious bullfights.