How to Spend Easter Week in Madrid 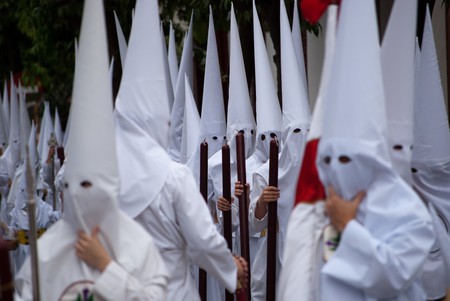 Easter is one of Spain’s most popular celebrations, marked in towns and cities across the country with religious processions, music and special sweet treats. The celebrations begin on Palm Sunday and last throughout Semana Santa, or Holy Week, culminating on Easter Sunday.

If you’re visiting Madrid over Easter, follow our guide so you don’t miss the sights, sounds and spectacle of this popular celebration.

During Semana Santa, religious brotherhoods around the city organise processions, in which penitents carry pasos – huge floats holding sculptures depicting scenes from the Passion of Christ. The floats are usually housed in churches around the city and are brought out once a year in the run-up to Easter.

The processions are practised for months leading up to Holy Week and are intricately choreographed, with music playing an important part. Marching bands often parade alongside the processions, with trumpets, drums and cymbals a common sound.

Some women taking part in the procession often wear the traditional mantilla, a lace veil, and rosary beads.

Where to see processions

Nuestro Padre Jesús del Amor procession begins at the Almudena Cathedral at 4.30pm and will go down Calle Mayor. 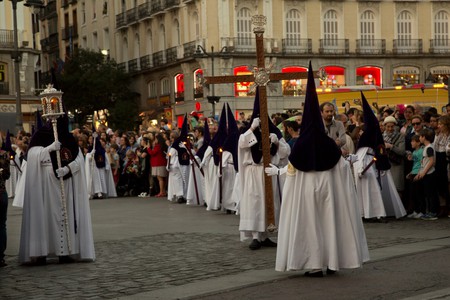 The procession of Santísimo Cristo de los Alabarderos en Madrid will start from the Royal Palace at 7pm and traverse central Madrid including Calle Mayor and Plaza Mayor. 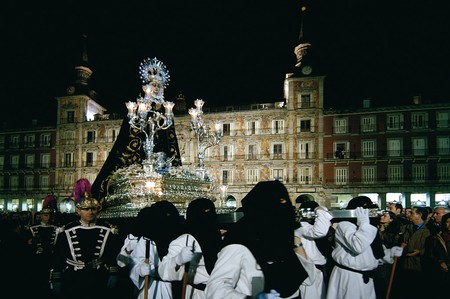 Procession of Solitude will set off at 4.30pm from the Church of the Concepción Real de Calatrava (Calle de Alcalá, 25).

You can check out where and when every procession is taking place (in Spanish) in Madrid’s official Holy Week programme.

A season of sacred music – Sacred music to accompany Easter – will take place in churches across the city. Churches hosting the concerts include the Basilica of Nuestra Señora de Atocha, the Pontifical Basilica of San Miguel and the Parish Church of Santa Cruz. Entry is free

The Church of San Ginés, just off the Puerta del Sol, will host the 12th year of the Organ Music Season, featuring some of the world’s finest organists.

On Good Friday (March 30th) at 8pm, four Spanish flamenco singers will perform from the balcony of the Casa de la Panadería on the Plaza Mayor as the parades cross the famous square. The four women will sing saetas, a traditional flamenco song. 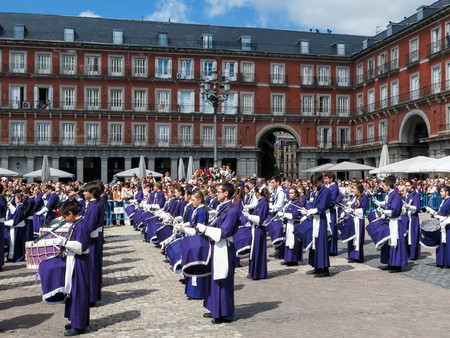 At midday on Easter Sunday religious brotherhoods will take part in the annual Drum Parade (Tamborrada), which will bring the Easter celebrations to a close. Make sure you get to the square early to get a good position – it is usually packed by midday.

If there was one food that was, above all others, associated with Easter in Spain it would be torrijas. The French toast-style sweet snack is made by soaking bread in milk and egg then frying with sugar and cinnamon. The Casa de las Torrijas (House of the Torrijas) specialises in the Easter treat.