An Insider's Guide to How To Spend a Day in Cádiz, Spain 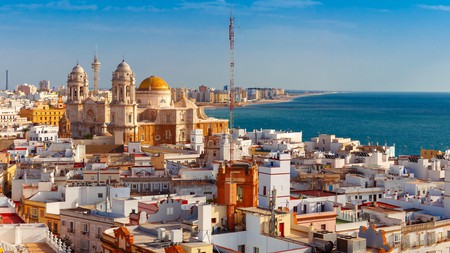 From shopping with locals at the vibrant fish market to catching a late-night flamenco show, follow our insider’s tips on the best way to spend 24 hours in the Andalusian coastal city of Cádiz. 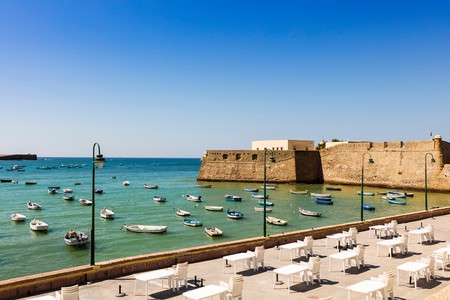 Founded over 3,000 years ago by the Phoenicians, Cádiz is one of Europe’s oldest continually-inhabited cities. Situated on southern Spain’s Atlantic coastline, it has some of the country’s finest fish and seafood. But while Cádiz has often been overlooked in favour of nearby Seville, the up-and-coming destination has plenty to offer, including eclectic architecture, impressive castles and white-sand beaches. Let Culture Trip guide you through a day exploring everything Cádiz has to offer, from breakfast to sundown, pointing out the best spots for tapas and a beer or two along the way.

Indulge in churros for breakfast

Start your day in Cádiz with the city’s residents (or gaditanos, as they’re known) at café-bar La Marina, on Plaza Topete in the heart of the historical centre. La Marina is famous for its churros – sweet, doughy snacks that Spaniards typically eat for breakfast or merienda, the Spanish version of afternoon tea. They’re served with a cup of melted chocolate for dipping, and best enjoyed with strong coffee – order yours solo (a strong, black espresso), Americano or con leche (with milk). Watch the city come to life from this ideal spot on Plaza Topete, a square with several colourful flower stalls that have given it the popular name Plaza de las Flores. 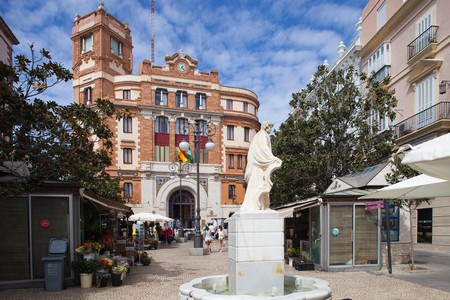 From your breakfast spot, it’s just a one-minute stroll to Plaza de la Libertad and the Mercado de Abastos, Cádiz’s central food market. Given the city’s proximity to the ocean, the speciality here – as will be obvious from the sights and smells – is fish, especially the pricey Almadraba tuna, named after a Phoenician fishing technique still used off the Cádiz coast. To immerse yourself in the joys of Cádiz market life, simply wander among the gaditanos and browse the colourful, pungent stalls, or take refreshment in one of the surrounding tapas joints (El Freidor del Mercado does some of the crispest and tastiest fried fish in town). 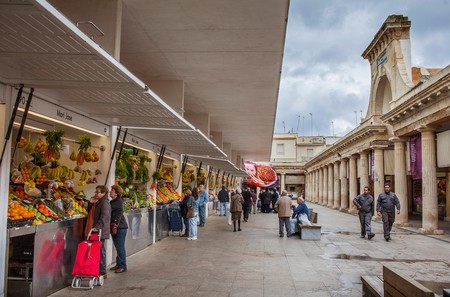 It’s a five-minute walk from the market to the Catedral de Santa Cruz Sobre el Mar, a mighty structure nicknamed the “Church of the Americas” because its construction was financed by lucrative trading with the so-called “New World” throughout the 18th century. Work began in 1722 and, under a succession of architects, lasted until 1838 – by which time the building displayed a striking blend of Baroque, Rococo and Neoclassical styles. Make sure you have a bottle of water with you before climbing to the top of its Levante tower, where you can enjoy wonderful views over the city’s densely packed rooftops. 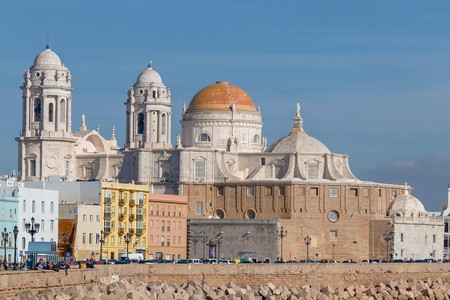 And this isn’t the only architectural treat in Cádiz; the city has a number of stunning buildings, such as the “House of the Four Towers”, which was built by a Syrian trader in the 18th century; the offices of the Andalusian Youth Institute on Plaza de Candelaria (where old men meet at Bar Estrella for their mid-morning brandy); and the ruins of what is believed to have been one of the largest amphitheaters in the Roman Empire, in use between 70 BC and the end of the third century AD.

Early afternoon, head to the historic fishing quarter of La Viña, which occupies the northwestern corner of Cádiz. Reached by walking alongside the seafront thoroughfare of Avenida del Campo, it’s an intimate barrio of gracefully-ageing townhouses and pretty squares, just a few metres back from the fishing beach of La Caleta. As you’re walking along Avenida del Campo, keep an eye out for the gang of wild cats that play and doze on the boulders by the sea (they’re maintained by a local collective named Cádiz Felina). 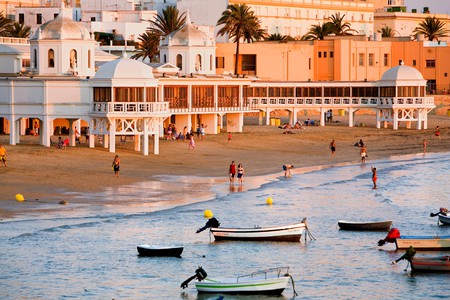 Lunchtime in Spain starts at about 2pm, when locals congregate for a nibble and a small beer (a caña) or two. Prop up the bar at the legendary Casa Manteca, the ambience and décor of which have barely changed since it opened in 1952. Manteca’s walls are plastered with sepia-hued bullfighting posters and press clips praising the house specialities – jamón, chorizo and potent cheeses, slices of which are served up on greaseproof paper with bread. They’re best accompanied by a glass of dry sherry, or fino – a fortified wine made nowhere else in the world except in this region of Spain.

After finishing your tapas lunch, stroll up Avenida Duque de Nájera to admire Cádiz’s famous rubber trees. Located opposite the university’s economics faculty, on Calle Enrique Villegas Vélez, these magnificent examples of the ficus macrophylla species are over 100 years old. Their vast canopies, extending from gnarled, twisting trunks, provide much-needed shade in the spring and summer. 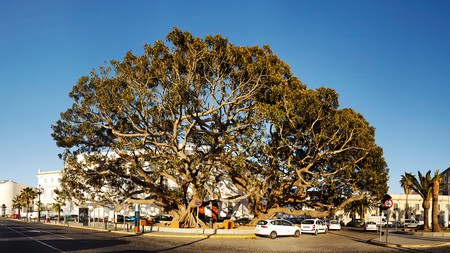 Located just over the road from the Árboles del Mora is La Caleta, the beach where La Viña’s fishermen have been mooring their little boats for centuries. An attractive curve of sand nestling up against the Santa Catalina castle, it’s a great spot for an afternoon or early-evening stroll or a swim in the tranquil water. La Caleta can get crowded in the summer, but there’s more space on Playa Victoria, a glorious beach that occupies the rest of the city’s coastline, where you’ll find plenty of chiringuitos (beach bars) specialising in fried fish.

Take a walk to the city’s beachside castles

Before evening arrives, check out Cádiz’s two castles, which can be found on either side of La Caleta. The Santa Catalina castle is situated on the beach’s northern extremity, and was started on the orders of Philip II in 1596, after the city was attacked and briefly occupied by an Anglo-Dutch army. Its understated rooms are now used for exhibitions, and in summer the castle’s courtyard is the beautiful setting for outdoor concerts. Also used as a venue for cultural events is the Castillo de San Sebastián: perching on a small island south of La Caleta (reached by a walkway from the mainland), it was constructed in the early 18th century to augment Cádiz’s defences. 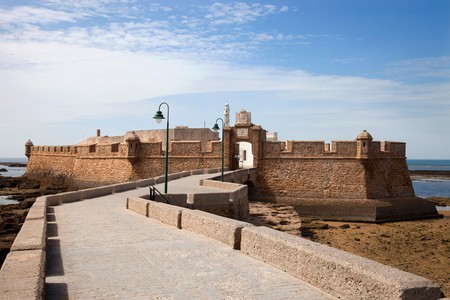 For dinner in Cádiz, it’s got to be tapas

Evenings in Cádiz centre around the paseo – when Spaniards stroll out into town in the early evening to see and be seen – and tapas. There’s no shortage of places to eat and drink in the city centre, but a couple stand out, especially if you’re after a fish supper. El Tío de la Taza occupies a romantic square in La Viña and has become one of the most popular hangouts in Cádiz over recent years: must-try dishes are the shrimp tortillas (tortillas de camarón), tuna fillets (filetes de atún) and the whole grilled mackerel (caballa).

There’s a more formal vibe over at Restaurante El Faro, which offers a classy menu centred around the region’s freshest fish and seafood, with several meat and vegetarian dishes also available. Another must-visit if you love your carne (meat) is Meson Cumbres Mayores, a cosy bar on La Viña’s northern edge where the house speciality is Iberian pork.

End the night with flamenco

Flamenco is integral to Cádiz culture, not least because the legendary singer José Cruz (1950–1992), known as Camarón de la Isla (“Shrimp of the Island”), was born and lived in the neighbouring town of San Fernando. Round off your day here by soaking up the city’s iconic cultural offering at Peña La Perla, a cavernous music hall that usually stages two or three flamenco shows a week. The performances are flamboyant rather than intimate, often featuring several dancers on stage at the same time, and provide a great introduction to the art form that’s so central to Andalusian culture and history. La Perla also offers a decent selection of tapas and sandwiches and has a bar, making it the ideal place to wind up a busy day exploring Cádiz.