How to Spend 24 Hours in Seville 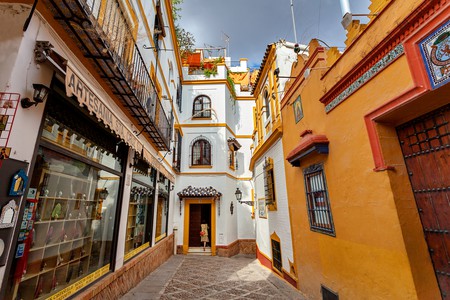 A typical street in the beautiful neighbourhood of Santa Cruz, Seville | © Irina Sen/Shutterstock

The beautiful and vibrant Andalusian capital offers a huge range of cultural, historical and gastronomical delights with which to pack a 24-hour visit. Here are the neighbourhoods and attractions to put on your itinerary if you’re spending a day in Seville.

Visit the Alcazar and Cathedral

Like most major Andalusian cities, Seville has a rich Moorish history. To kick off your 24 hours in the Andalusian capital, acquaint yourself with this aspect of its culture by visiting the Alcázar palace, just a few minutes on foot from the cathedral. because it was constructed during Seville’s Moorish and Christian epochs, the Alcazar is a fascinating blend of styles and is considered by many to be one of the finest examples of Mudéjar architecure in Spain. It is also the oldest royal palace still in use, and often accommodates members of the Spanish royal family during their visits to Seville. 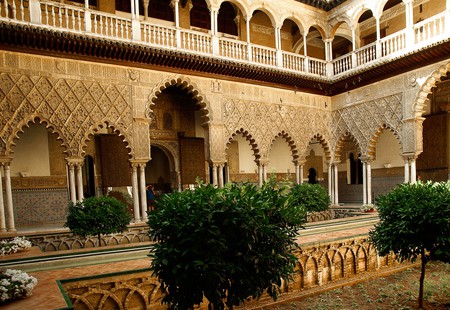 Seville's Alcazar is one of the finest examples of Mudejar architecture in Spain; pixabay

From the Alcazar, it’s less than a five-minute walk to the cathedral – the largest Gothic cathedral in the world and the third-largest church on the planet. When Ferdinand III took Seville from the Moors in 1248, the city’s mosque was immediately Christianised – although its minaret survives in the form of the Giralda bell tower – but it wasn’t until 1401 that the decision was taken to build a proper Christian church on its site. Construction of this sprawling Gothic complex, which comprises 80 chapels and has the longest central nave in Spain, continued for over 100 years. In 1507 work was finally completed and the resulting structure quite spectacularly succeeded in its original aim – to show the rest of Europe how powerful and wealthy Seville had become. Exploring the extravagantly ornate interior of the cathedral is also a great way to escape the heat of a Seville summer day. 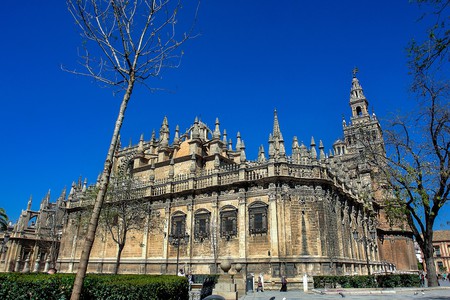 Seville's Gothic cathedral is the largest in the world; pixabay

After taking in the Andalusian capital’s two most famous monuments, stay central and check out of its best-known barrio, formerly the Jewish quarter. Santa Cruz is the achingly pretty neighbourhood into which Ferdinand III banished the city’s Jews when he seized the city from the Moors in the mid-13th century; it extends northeast of the cathedral and is best by explored on foot. In fact, so narrow are its streets that those in the former Gypsy quarter, Triana, will seem like Parisian boulevards in comparison. Discovering Santa Cruz’s secret squares and stumbling upon its beautiful old palaces and churches is a great way to spend a couple of hours in Seville, all the more so because it’s packed with traditional tapas joints in which you can take refuge from the heat. Start hunting for a lunch venue by walking up Calle Mateos Gago, away from the cathedral. This popular street is lined with tapas bars and restaurants and leads into the heart of Santa Cruz.

A typical street in the beautiful neighbourhood of Santa Cruz, Seville | © Irina Sen/Shutterstock

After a siesta it will be time to head back out again, this time crossing the green waters of the Guadalquivir River via Puente Isabel II. On the other side of the river from the city’s main attractions is Triana, the original Gypsy quarter of Seville, a barrio steeped in the closely related arts of bullfighting and flamenco. Indeed, as you come off the bridge on the Triana side of the river, a statue of matador Juan Belmonte greets you. Belmonte was born into a Gypsy family in Triana at the end of the 19th century, and is now regarded as one of the greatest bullfighters in the spectacle’s centuries-long history. Opposite Belmonte is a statue of a flamenco dancer, a tribute to the other of Triana’s cultural twin peaks. Despite its huge popularity with tourists, this pretty neighbourhood has never lost its local ambience: at the weekend, families joyfully collide in the street and fuss over babies in prams before crowding into the local tapas joints, the walls of which are plastered with old bullfighting posters, mounted bulls’ heads and weeping Virgin Marys, for lunches that go on all afternoon and dinners that last until the early hours. 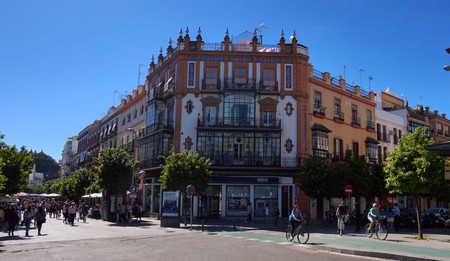 Experience the Nightlife on the Alameda de Hércules

Bar, Spanish
Facebook
Email
Twitter
Pinterest
Copy link
Share
Map View
You could quite happily pass an entire evening and night drinking, eating tapas and chatting on the streets and squares of Triana, but with just 24 hours in Seville you need to experience another part of town over dinner. So head back over the bridge, and seek out the Alameda de Hércules for some of the Andalusian capital’s best nightlife. This expansive plaza was for many decades the domain of pickpockets, drug-dealers and prostitutes, and its surrounding streets were once home to 35 brothels. In 2006, Seville council decided to clean it up and turn it into a fashionable nightspot. The Alameda’s many spacious terraces make for perfect spots from which to watch the evening paseo (promenade) over drinks and dinner, after which you can simply cross over the square for decently priced cocktails in one of the late-night bars. There are also plenty of places on and around the Alameda for live music, offering everything from flamenco to jazz, making this the perfect place to party out the final hours of your stay.
Open In Google Maps
s/n Alameda de Hércules, Sevilla, Andalucía, 41002, Spain
Visit Website
Give us feedback
Give us feedback