How to Spend 24 Hours in Marbella 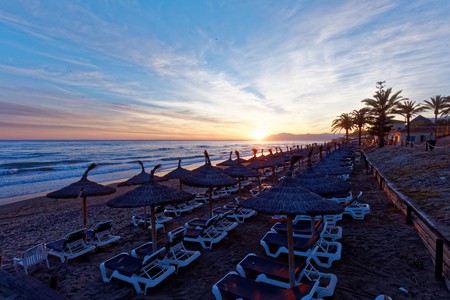 There is much more to Marbella than swanky beach bars. As you’ll discover on a 24-hour visit here, this lively Mediterranean city has plenty more to offer, including a beautiful old town and a classy shopping scene. Read our guide for how to get the most out of 24 hours in Marbella.

Spend a good part of your morning in Marbella exploring its casco antiguo, or old town. Because it’s rarely mentioned in lists of Andalusia’s prettiest neighbourhoods, the city’s oldest quarter comes as a wonderful surprise. Consisting of a web of gorgeous, flower-filled streets and squares, it extends westwards from Plaza Puente Málaga (bordered by the ring road to the south and Calle Salvador Rueda to the north). Navigating this beautiful maze can quickly become confusing – but that’s the whole point, as getting lost is the best way to explore barrios such as this. Sooner or later you’ll end up in the Plaza de los Naranjos, a typical Andalusian square filled with orange trees and surrounded by bars and restaurants. 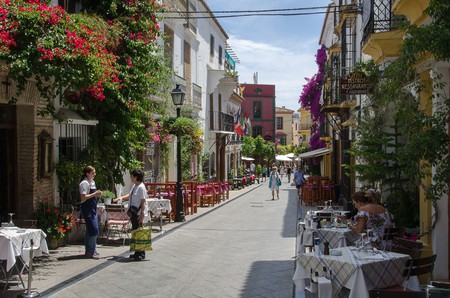 Marbella’s casco antiguo doesn’t exactly overflow with historical attractions (aside from the gracefully ageing townhouses to be found on every street, that is), but two structures are well worth seeing. On the eastern edge of the area are the 10th and 11th-century walls of what was once the city’s Moorish castle. Scarred by the wounds of long-forgotten battles, they are all that remain of the original building. And in the centre of the barrio is the Iglesia de Nuestra Señora de Encarnación, an elegant 17th-century church that bustles with locals attending mass come early evening.

This part of Marbella is also notable for the classy boutique shops that line its narrow streets. In fact, it’s impossible to walk for a couple of minutes without being lured by charming sales assistants into outlets for shoes, clothes, handbags, jewellery and gifts. Top tip: visitors who don’t wish to be dragged from boutique to boutique by their travelling companions might be better off finding a decent local bar for post-shopping refreshment instead. Try Taberna Casa Curro – a tiny tapas joint decorated with old-school bullfighting and flamenco posters. 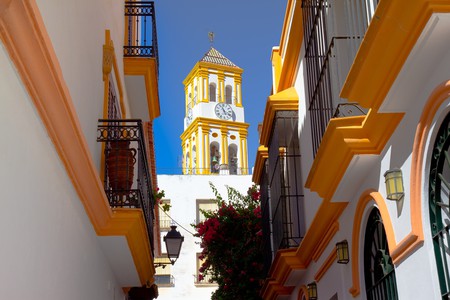 Before lunch, check out Marbella’s quirkiest museum. Located just north of the historic centre in the Represa Park, the Museo del Bonsai houses Europe’s largest collection of wild olive trees and an equally captivating population of miniature trees and shrubs.

Lunch with the locals

For a lively and authentic spot for lunch, explore the streets that lie just to the east of the casco antiguo, north of the ring road. Those that run off Avenida Antonio Belón are home to some superb local restaurants and tapas bars that fill up with office workers at around 2pm. Most of them offer set lunch menus of homemade Andalusian cuisine, priced between €10-15 (which is excellent value). Particularly good for the quality of its food and lively ambience is Bar Guerola.

After a leisurely lunch, dedicate your afternoon in Marbella to relaxing on its beaches or, if you’re visiting later in the year, strolling along the Paseo Maritimo. Playa de la Fontanilla is the largest of Marbella’s four principal beaches and becomes very crowded in the summer months; as a general rule, the further west you head, the less crowded the sands are and the better the chiringuitos. Walk down the promenade, past the smart Amaré Beach Hotel, and you’ll soon find yourself in the Barrio de Pescadores – Fishermen’s Quarter – which is home to to the lovely little Playa de la Bajadilla. This tranquil beach overlooks the lesser-known of Marbella’s two ports, where quaint fishing boats are moored after their morning’s work. 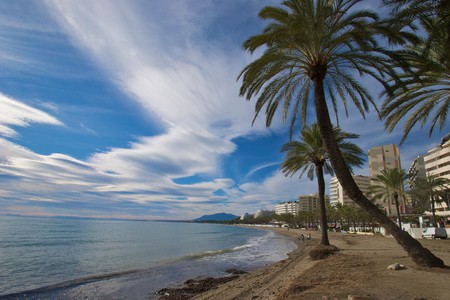 Thanks to Marbella’s sunny climate, you can enjoy the beaches here as late as October; but if you’re visiting during the off-season, there’s still plenty to do along the Paseo Maritimo, which begins at the Hotel Fuerte and stretches the length of the city along the waterfront. Marvel at the Salvador Dali sculptures on the Avenida del Mar; take a shady break in Constitution Park, or simply weave amongst the locals as they take their afternoon stroll in big groups of friends or family. The views out towards the north coast of Africa are wonderful and on a clear day you can see the Rock of Gibraltar 50 miles (80km) to the east, often wearing its cap of heavy cloud.

It would be a sin to spend 24 hours in Marbella without trying the fantastic seafood, so for dinner head west out of the city centre into the fishing quarter. Walking past the fisherman’s huts on your left and keeping the Bajadilla beach on your right, you’ll soon arrive at the Puerto Playa restaurant. With tables out on the sand and a large covered terrace for chillier days, this is one of Marbella’s best seafood restaurants and the perfect spot to watch the sun set on your day in Marbella. 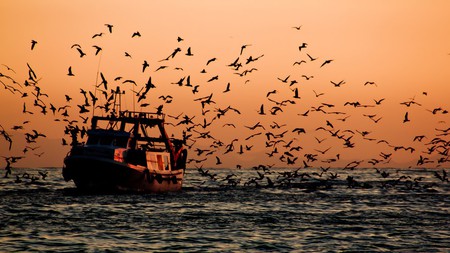 A fishing boat returns to Marbella’s harbour – with hungry seagulls in tow; Hernán Piñera/flickr
Give us feedback