How To Navigate Public Transport in Madrid 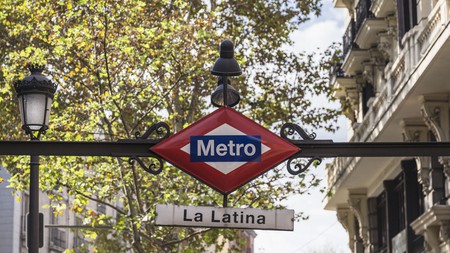 Getting around Madrid on public transport is one of the easiest and most environmentally friendly ways to see the city. With a comprehensive network of metros, buses and city bikes, you’re spoilt for choice.

Madrid is on a mission to cut its pollution levels and is actively encouraging more people to use public transport. As such, there’s been large-scale investment in the Spanish capital’s network in recent years, and the city boasts an excellent, interlinked system that includes an extensive metro system, buses, an electric bike-sharing scheme and commuter trains.

Madrid’s public transport is often the most convenient way of getting from point A to point B. Over the past few years, the city has been tirelessly upping its green credentials by, among other things, widening its pavements for pedestrians and increasing the number of bike lanes. But navigating this network isn’t always instantly straightforward for visitors, which is why Culture Trip has produced this handy guide on how to do it. 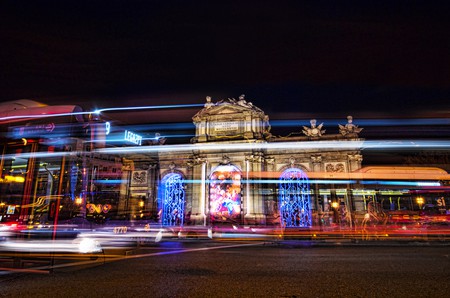 Madrid’s búhos, or ‘owls’, can take you across the city after hours | © David Díez Barrio / Getty Images

Every day, around 2.3 million people use Madrid’s metro, and the system is one of the most extensive in the world, covering 294 kilometres (183 miles). With its 302 stations, the metro spans the entire city, right through to its outer limits, and is one of the best ways to travel while in Madrid. According to the Madrid Metro, taking the metro is five times less polluting than travelling by car.

The metro runs from 6am until 1.30am every day, with peak morning and afternoon rush hours between 8am and 10am, and 6pm and 8pm. 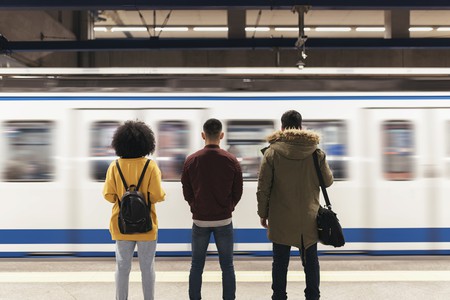 To save on wasteful paper tickets, travellers now need to purchase a Multi card. This handy individual and reusable card can be topped up with different types of tickets. Multi cards are available to buy at machines in any metro station for just €2.50 (£2.10), and you can opt to load various types of tickets onto the card, including a single ticket, a 10-journey ticket and discounted tourist tickets, too.

Tourist tickets are a great option if you are visiting the city and want to pack in a lot of sightseeing. They can be used on both the metro and buses and are available for different stay durations, from one day (€8.40 or £7.15) to seven days (€35.40 or £30).

As well as being Madrileños’ preferred way to get around their city, Madrid’s metro system includes several unusual sights. Some stations feature stunning artworks and stylishly cool graffiti. Look for graffiti artists Okuda and Rosh333’s colourful mural of the Spanish guitar legend Paco de Lucía in the metro station that bears this famous musician’s name. 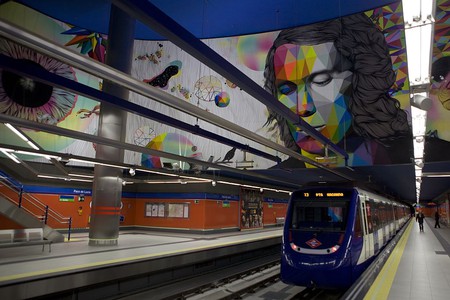 Madrid has poured enormous financial resources over the past few years into making its bus fleet more environmentally friendly. It has recently introduced the first electric buses that make their – very quietly – way around the city.

Buses come into their own after the metro has stopped at 1.30am. Night buses are known as búhos, or ‘owls’, and to find them, look out for the yellow-and-black bus schedules at bus stops, which show the different routes around the city. 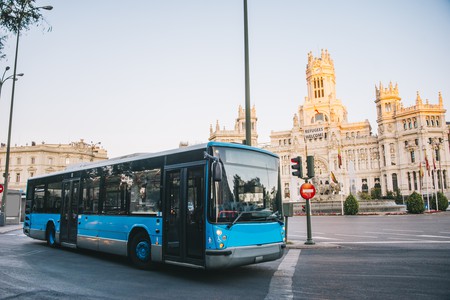 Buses are also an excellent option for travellers with limited mobility. Not all metro stations have lifts, but all buses are wheelchair-friendly and can lower their entrances to curb level to make it easier for those who use wheelchairs to get on and off.

A single bus fare is €1.50 (£1.30) and can be paid in cash. Alternatively, you can use a Multi card – valid for both metro and bus journeys – available at all of Madrid’s metro stations.

A 24-hour airport bus is available from Atocha train station and also outside the Palacio de Cibeles, home to the city hall. These buses run every 15 to 20 minutes and cost €5 (£4.25), which you can pay in cash or by card.

In the past, Madrid was not particularly known as a bike-friendly city, but it has been making a lot of effort in recent years to encourage cyclists and make them feel more welcome on its roads. It has created a lot more cycle paths and has also initiated a public bike scheme, BiciMAD, which represents the city’s newest form of public transport.

It comprises 165 electric bike docks across the city, and bikes can be rented for short periods of time. It’s an easy and green way not only to get from point A to point B but also to try cycling in the city (with the bonus of some electric power boosts for getting up the city’s hills). 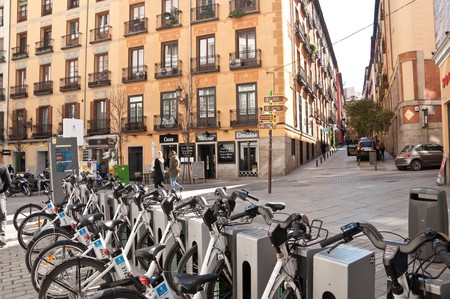 For a quick and sustainable option, hire a BiciMAD electric bicycle so you can nip around the city seamlessly | © Daniela Maria / Alamy Stock Photo

The bikes are easy to rent as an ‘occasional user’. You input your information on the screen at the docking station and choose a one-, three- or five-day card. You enter your card details; you will be charged at the end of the time selected. You can use the card to rent a city bike as many times as you want during that time. Bikes cost an initial €2 (£1.70) for the first hour and a further €4 (£3.40) for the second hour and each additional hour.

City bikes are best for short journeys, but for those travellers wanting to stick to two wheels while exploring Madrid more extensively, you can also rent from the city’s various bike shops on a daily, two-day or even longer basis.

Love them or hate them, electric scooters have recently become a familiar sight on the streets of many cities, and Madrid is no exception. While cities are rushing to catch up with this new and growing trend, residents and visitors are embracing the new mode of transport because of its ease of use and environmental credentials.

Several scooter companies operate in Madrid, including Lime, Jump and Uber. Scooters can reach up to speeds of 25 kilometres per hour (16 miles per hour) and can be picked up and deposited more or less anywhere in the city. 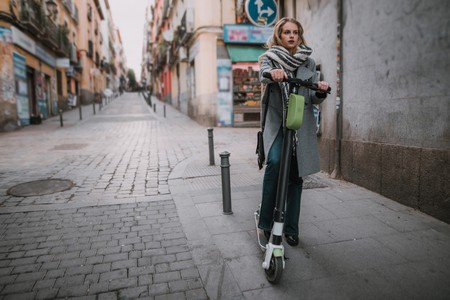 There are some essential rules to follow when renting an electric scooter in Madrid. First, you can ride scooters in bike lanes and single-lane streets, but not on pavements, two-lane roads or in bus lanes. Second, helmets are not obligatory for those under 16, but their use is recommended. Third, the minimum age to use electric scooters on the roads is 15 years old.

Cercanías Madrid, the city’s commuter rail service, is run by national train operator Renfe and is a great way to travel slightly longer distances in Madrid. It’s also a cheap way to get into the city from the airport, with a single journey from Terminal 4, for example, costing just €2.60 (£2.20).

The Cercanías system is also a great option if you want to travel further afield. It’s a useful way to explore Madrid’s outer barrios or nearby regions, including the university city of Alcalá de Henares and the Sierra de Guadarrama mountain range just north of the capital. 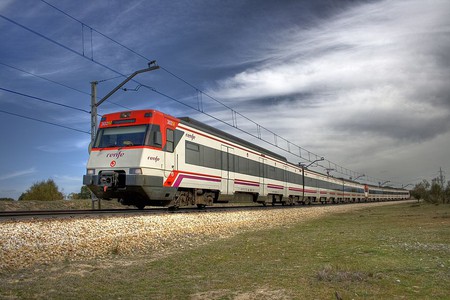 Even within the city, the Cercanías can sometimes be a better option than using the metro when travelling longer distances, as they generally cover these journeys faster.

There are some situations when taking a taxi is safer or more convenient – such as late at night when the metro has stopped running or when travelling to or from the airport with a lot of luggage. In Madrid, all journeys between the airport and central Madrid are a fixed price of €30 (£25.50). 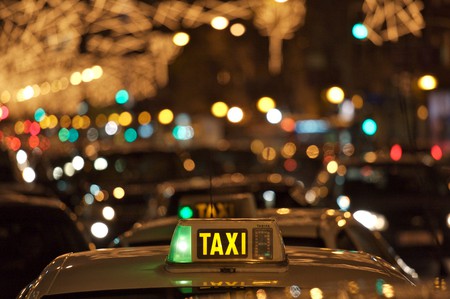 Taxis are easy to find in Madrid, but other cab-hailing services also operate in Spain’s capital city | © npscan / Getty Images

There are lots of taxi ranks around the city, or taxis can be reserved using apps such as Free Now. Other cab-hailing services, such as Uber and Cabify, also operate in the city.

Ride-sharing – when people offer up spare rider capacity in their cars, which can be reserved at a price by someone also going to the same destination – has exploded in popularity in Spain over the past few years, with companies such as the French-owned BlaBlaCar dominating the market.

This carpooling method is certainly a more sustainable way to travel to those out-of-the-way places that are not so well served by public transport and saves you the cost and hassle of renting a car. As such, it’s an excellent option if you are planning a day trip out of the city or heading further afield in Spain. 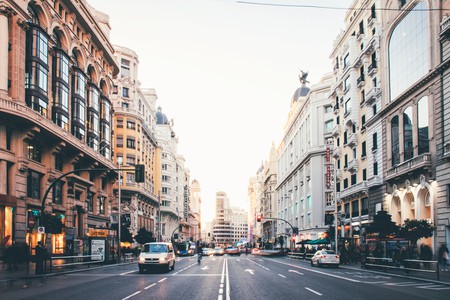 From city bikes and the metro to buses and trams, Madrid has an extensive and comprehensive network of public transport | © Gemma Escribano / EyeEm / Getty Images

It’s easy to find your desired route – you simply go onto a car-sharing website and search for your destination. Several options will usually pop up of people planning to drive there on a particular date. Prices vary, but typically, the costs from Madrid to Barcelona or Madrid to Valencia are around €24 (£20.40) and €21 (£17.80) respectively – making this travel option much more affordable than others, as well as kinder to the planet than if you were to rent and drive yourself.