How Mallorca is Fighting Back Against Rampant Tourism 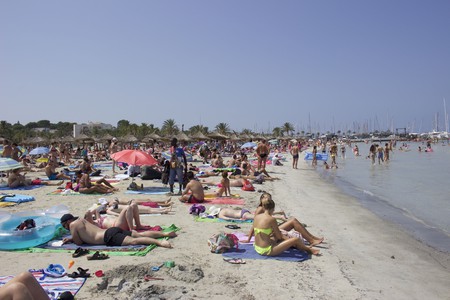 Once a magnet for the likes of artists, musicians and writers – drawn by its timeless landscape, unhurried pace and sunny Mediterranean climate – Mallorca is increasingly attracting what might politely be called a less-cultured sort of visitor. And while mass tourism is obviously nothing new to the Balearic isle, it’s inching towards saturation point and starting to seriously stretch not just its limited island resources, but the patience of its local population.

Some of the more visible signs of this growing tension came in the form of graffiti in the capital, with exclamations such as ‘Tourist You Are the Terrorist’ and ‘Tourists Go Home’ appearing on the walls of Palma old town. Although quickly removed by the council, similar street-based protests continue to spring up in the form of guerrilla sticker campaigns with slogans like ‘Tourism Kills the City’ (featuring a skull and crossed selfie sticks). 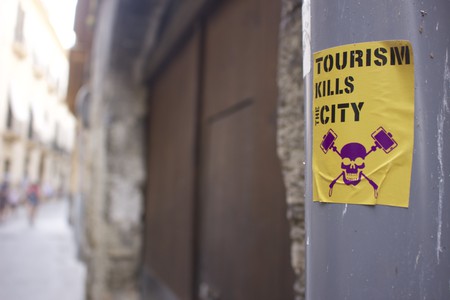 A more organised grassroots campaign Ciutat per a qui l’habita (or ‘the city for those who live in it’) has also gained momentum, with their banners an increasingly common sight around the capital. A recent protest also involved the symbolic closure of the Ministry of Tourism, who they say are responsible for irresponsible promotion of the island.

Airbnb has also received plenty of flak from locals, with the company being blamed for a surge in housing costs that are pricing out the native population. According to recent reports, the cost of renting a property has rocketed by 40% in the last four years, leading to the Mayor of Palma to initially call for a total ban of the home-sharing site. He’s since softened his stance to supporting the Amsterdam model of strictly limiting lengths of rentals. 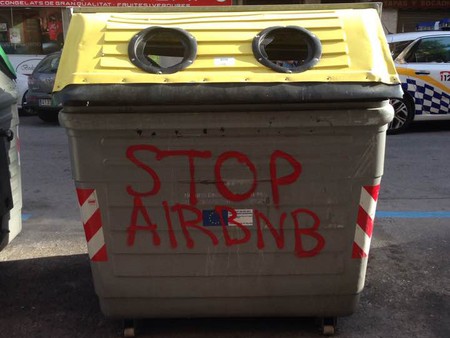 The number of cruise ships visiting the island has also risen dramatically. A single day last year saw eight cruisers pour over 20,000 extra bodies into the city, overwhelming the old town and leading Balearic tourism minister, Biel Barceló, to call for a daily limit for four. The cap was later set at six, which still equates to up to 17,000 cruise passengers descending en masse (with many on all-inclusive packages that contribute little economically). 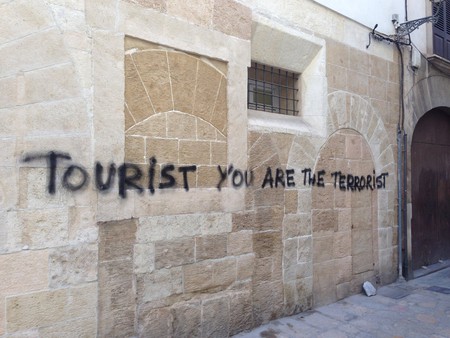 Beside the sheer numbers, the island is also pushing back against the behaviour of its visitors. Particularly popular fodder with the tabloid press, the unbridled displays of booze-soaked revelry witnessed in resorts like the notorious Magaluf have come under fire. A crackdown by the local authorities on anti-social behaviour included rolling out 64 fineable offences, for everything from public nudity to climbing trees, with penalties of up to €3,000 (US$3,490).

Disgruntled locals have begun a campaign to curb what they call ‘cheap, anything-goes tourism’ in the form of a Change.Org petition. Now standing at over 14,000 signatures, they demand further clamping down on the annual scourge that makes life in resort towns such as S’Arenal, Playa de Palma, Palmanova and Magaluf intolerable for the permanent population. They cite vomit-splattered pavement, random acts of vandalism and lewd behaviour as just a few of the annoyances that become part of daily life during the summer months.

With Spain soaking up most of the business lost by terrorism-hit destinations such as Egypt, Turkey and Tunisia, it’s no surprise Mallorca has experienced a rising tide of visitors. The result has been over 80% of residents feeling the island suffers over-population during the high season (according to a recent poll by research organisation Fundación Gadeso). But with around the same percentage of the island’s economy linked to the industry, few beyond a militant fringe would want all tourists to actually ‘Go Home’. If things continue to escalate unchecked the jam-packed beaches, congested resorts and overcrowded attractions will eventually push holidaymakers towards other sunny climes – though not before sullying what was once an enchanting piece of Mediterranean paradise.