How Best to Spend a Layover in Madrid

Plane|©Fuzz/Pixabay
Even if you only have a limited amount of time, there are plenty of things that you can see and do in Madrid. From exploring historical sites to sampling the city’s cuisine, discover how best to spend a layover in the Spanish capital.

You don’t have much time, so concentrate your sightseeing around the centre of the city. Take the metro, cercanías (commuter train) or a taxi (all taxis have a flat €30 fare into the city) to the neighbourhood of Sol. The Puerta del Sol is a public square that is right at the centre of the city and is a popular meeting point and the location of your first stop.

Fuel Up at a Bakery

Bakery, Spanish
Visit one of the city’s most famous bakeries for a breakfast pick-me-up. La Mallorquina, right on the Puerta del Sol, is famous for its napolitanas (pastries filled with chocolate or custard cream). It is always packed, but don’t be put off by the crowds, just elbow your way inside. Just down the street is the slightly less frantic El Riojano. This exquisite bakery, which always has tempting displays, was founded in 1855 by the patissier to the queen. Have breakfast in the little café in the back; the hard bit is choosing which pastry to order.
More Info
Open In Google Maps
Madrid, Spain

Head down Calle Mayor away from Sol and you will arrive at Madrid’s cathedral. It is relatively new; it was only completed in 1993. In 2004, King (then Prince) Felipe married Letizia Ortiz in a grand ceremony at the cathedral. After you’ve explored inside, head down the street next to the cathedral to see Madrid’s original Moorish walls, a sight that is often missed by visitors. 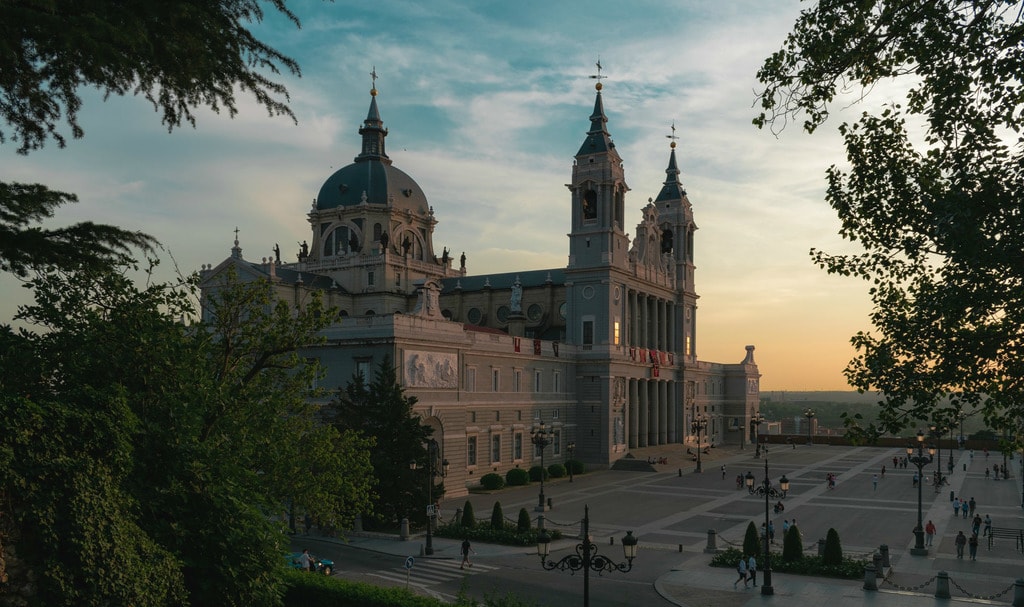 The largest royal palace in Europe sits on the beautiful Plaza de Oriente, which is a lovely square of manicured gardens and statues. You can go inside the palace, but if you are pushed for time, just enjoy the view from the square. Don’t miss the adjoining Sabatini Gardens, a great place to stroll that has lots of great views of the palace. 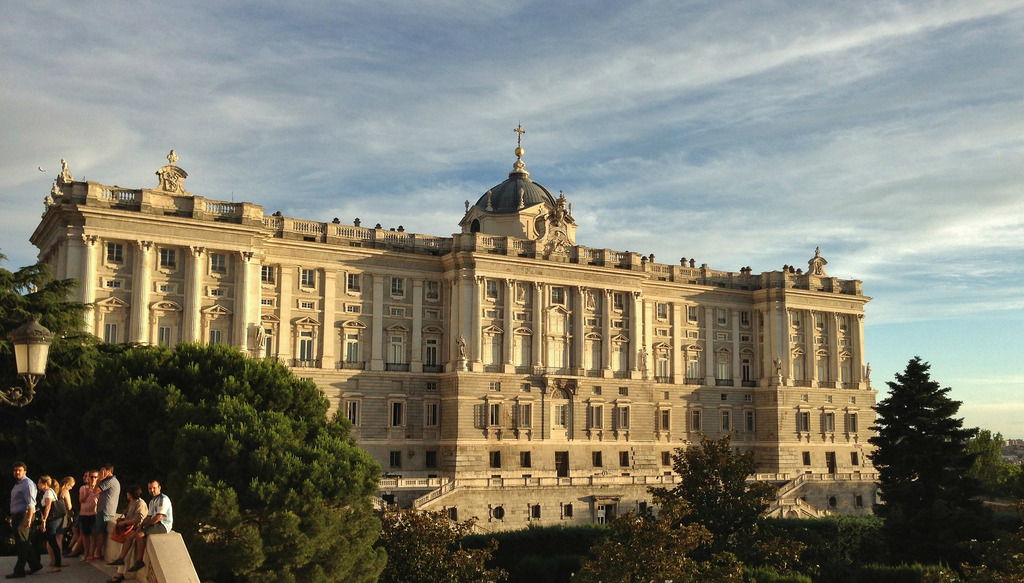 From the palace, cut across the Plaza de España to the Gran Vía, Madrid’s main shopping street, lined with impressive early-20th-century architecture. The Telefonica Building was one of Europe’s first skyscrapers. Today, the street is home to Spain’s biggest high-street brands, such as Zara and Mango. 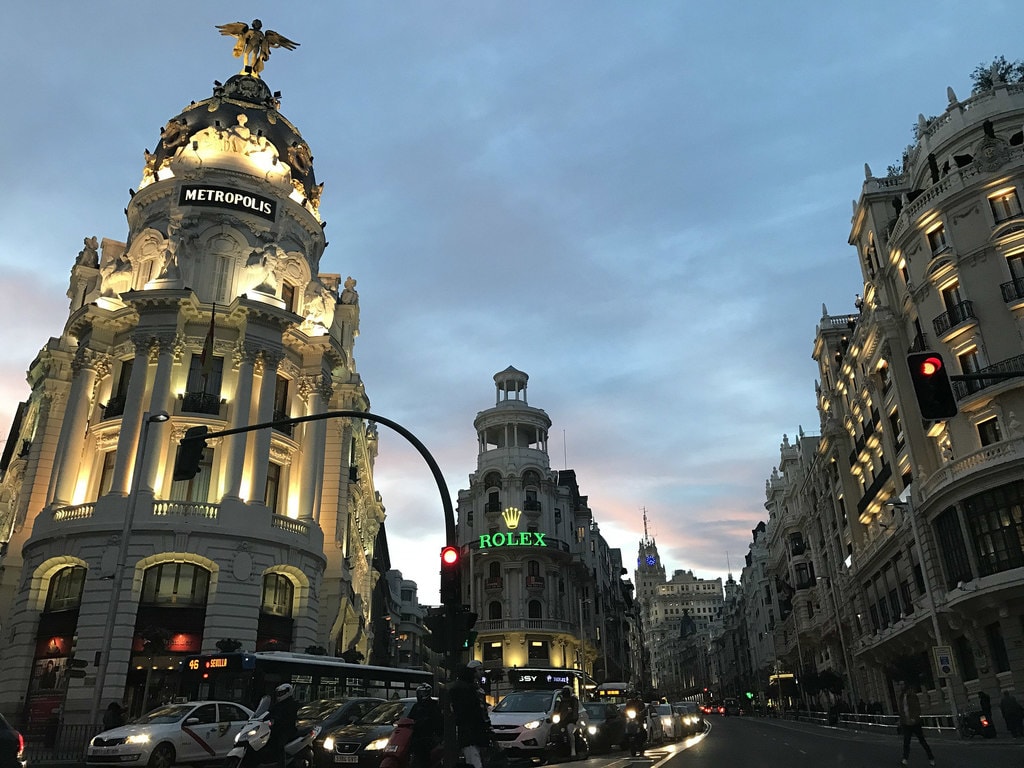 Restaurant, Spanish, $$$
The view from the Azotea de Bellas Artes | @AlbertoAmortegui / Pixabay
For unbeatable views over Madrid, head to the rooftop bar of the Círculo de Bellas Artes, an arts and cultural centre on Calle Alcalá, just near the end of the Gran Vía. Recline on one of the bar’s beds or grab a high table with amazing panoramic views over the city and to the Guadarrama Mountains beyond.
More Info
Open In Google Maps
2 Calle del Marqués de Casa Riera, Madrid, Comunidad de Madrid, 28004, Spain
+34915301761
Visit website

Building, Park
Crystal Palace in Retiro Park | © ahau1969 / Shutterstock
Madrid’s most famous park is a great place to stroll, or rent a boat on the lake if you fancy putting your rowing skills to the test. There are little kiosks dotted around the lake where you can stop for a drink. It’s a family-friendly place, with street entertainers keeping the kids happy at weekends.
More Info
Open In Google Maps
7 Plaza de la Independencia, Madrid, Comunidad de Madrid, 28001, Spain
+34914008740
Visit website

All that walking will have built up an appetite, so head to the Barrio de Las Letras, Madrid’s literary quarter, for some food. This area is a great mixture of traditional old taverns and modern restaurants and bars, so whether you’re looking for vegan food, or traditional Spanish tapas, Las Letras will have you covered. Stop at Cervecería Alemana for a beer at what was one of Ernest Hemingway’s favourite Madrid haunts.

You can get the metro back to the airport from Sol, or there is an airport bus that goes from Plaza de Cibeles, not far from Barrio de Las Letras, every 15 minutes.