How Barcelona’s Panot Tiles Became a Symbol for the City 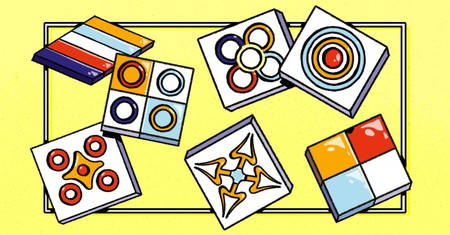 Found on streets across Barcelona, the panot has become synonymous with the Catalan capital and is an easily-recognised symbol of the city.

Whether it’s the altogether astounding Sagrada Família or the futuristic-looking W Hotel, it’s safe to say that Barcelona is no stranger to bold designs. Walking around, visitors tend to have their eyes fixed on the jaw-dropping architecture and unique landmarks of the city. Yet those who let their gaze fall to the floor will have noticed that even the pavements in Barcelona have something dramatically eye-catching about them. One of the city’s most emblematic pieces of design is a humble pavement tile. Here’s what you should know about this historic tile, including where to see the most famous panots in Barcelona – and the most infamous, too.

A city founded on art

With so much to admire, it’s perhaps no surprise that some of Barcelona’s landmarks go less noticed despite millions of people walking straight over them each day. The panot might be little more than a decorative pavement tile, but it can be found outside the city’s most historic monuments and popular landmarks, from the Gothic Quarter to hip Sant Antoni.

In fact, panot tiles cover some five million square metres of pavements in Barcelona, each one measuring 20 square centimetres. Anyone visiting the city will inevitably walk on a panot tile at some point during their stay. These tiles are just a further example of how the Catalan capital is a city with art and design at its heart and a long history of creative thinking.

The house of mud

The story of how Barcelona got its unique panot tiles starts at a time when the city’s pavements were not as sophisticated as they are today. Up until the early 20th century, homeowners in Barcelona were responsible for paving outside their own houses. As a result, the pavements – where they were even bothered to be built – were often uneven, patched together with cement and asphalt.

One local newspaper even published a satirical cartoon of Barcelona bogged down in mud and earned the city the nickname of Can Fanga, or ‘house of mud’. At the same time, Barcelona was undergoing rapid expansion, and construction of the Eixample – ‘extension’ in Catalan – was underway. Aware of the situation and eager to find a solution, in 1906 the city council launched a public tender for the manufacture of some 10,000 square metres of pavement tiles.

At the time of the tender, the council published a series of drawings showing five models for the tiles. Some of these are believed to have already been in use before 1906, while others like the now-iconic Flor de Barcelona, or ‘Flower of Barcelona’, were designed especially for the project. Along with the four-tablet panot – a square divided by a cross into four smaller squares – these two designs are the most common in Barcelona today and, as a result, the ones considered to be most emblematic of the city.

Interestingly, the Flor de Barcelona is often attributed to the famous Catalan architect Josep Puig i Cadafalch. The flower design is said to have been a copy of the one he instated in the entrance of his Modernist mansion Casa Amatller. However, new research published by La Vanguardia argues that the designs are not identical, and as a result the architect cannot be credited with the image.

However, while Puig i Cadafalch may not be responsible for creating the Flor de Barcelona, other famous designers have left their mark on the city. Most notable is Antoni Gaudi, the mastermind behind the Sagrada Familia, Casa Batllo and Park Guell who designed his own panot tile, which can be found along the Passeig de Gracia. His nautical-themed panot is etched with three different marine species: starfish, ammonoid mollusks and seaweed. The tile was originally designed to pave the floors of Casa Batllo, but a delay in manufacture meant that it was used outside the building instead.

When pavements get polemical

Not all panots have proved popular, and some more recent attempts to introduce new panot models have been controversial. In 2014, the Diagonal model was introduced on the eponymous Avenida Diagonal. However the tiles suffered premature wear and tear, which required a number of tiles to be replaced. The resulting effect was something of a patchwork and caused frustration for local residents who were unhappy to see that the costly renovation of the avenue required constant reparation.

Another less successful attempt to introduce a new model of panot was the 2008 launch of the ‘B for Barcelona’ model. Envisaged as a model for the new millennium, the panot was to be used across the city in new construction work. As a trial, the tiles were used to pave a segment of Ganduxer Street, but the design proved unpopular and the project was soon abandoned. You can still see the only surviving ‘B for Barcelona’ panots on Ganduxer Street today.

The panot and Barcelona

If not all panot designs have withstood the test of time, the fact remains that these unusual tiles are a symbol of Barcelona’s artistic spirit. Over 100 years after the tiles were first introduced, the council remains committed to providing locals with pavements to be proud of, representing the uniqueness and originality of the city and its many notable residents.

So next time you’re in the Catalan capital, be sure to take a minute to look down beneath your feet – you may just be walking on a piece of Barcelona’s history. Here are some of the most famous panots and where to find them:

Flor de Barcelona: the flower of Barcelona can be found predominantly in the Eixample and in particular along the Ruta del Modernismo, a walking itinerary past the city’s Modernist landmarks.

Gaudí panot: this ornate tile was designed by Antoni Gaudí and can still be found opposite La Pedrera on the Passeig de Gràcia.