The Best Hotels with Pools in Seville 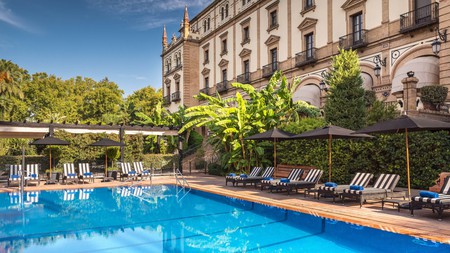 The Andalusian sun is powerful, so if you’re planning a trip to Seville, stay at a hotel with a pool in which to cool off. There are plenty of rooftop terrace options in and around the Centro Histórico, but also larger ground-level pools a little way out of the city centre. Either way, there’s masses to do in Seville besides relaxing by the pool, being as it is the cultural and historical centre of southern Spain with a varied and fascinating history encompassing the Roman and Moorish empires – so make sure you don’t spend all your time sunbathing. 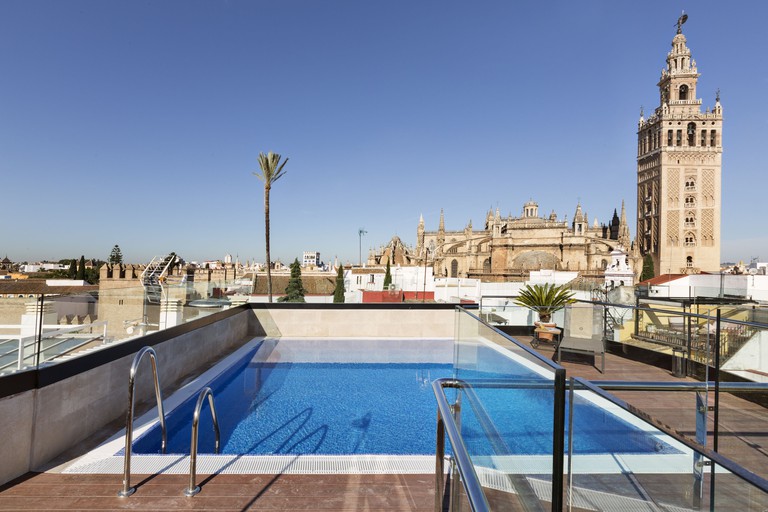 View Rooms
There are splendid views from the rooftop pool at Hotel Casa 1800, located right by the cathedral and Giralda Tower. The Hospital de los Venerables and Royal Alcázar can be admired while you relax by the water at this boutique hotel in Santa Cruz, the medieval Jewish quarter. The former mansion was built in 1864 and has a beautiful three-storey open courtyard in the centre. If you can stretch to it, Suite 1800 has a hot tub and rooftop terrace, but even the premium rooms have outdoor patios.
Everything you need to know 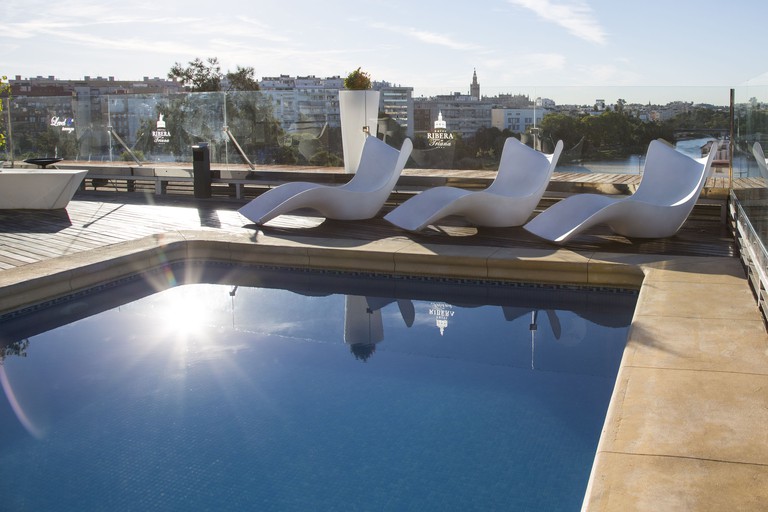 View Rooms
The views from the rooftop pool at this hotel by the Guadalquivir river vie for the title of best in Seville, with the location, a little way across town from the city centre, allowing you to stand back and admire it. In particular, there are great vistas of the beautiful 19th-century arched Triana Bridge just down the river. The building is modern but there are fun Moorish touches to the rooms, in which you have either river or city views – splash out on a suite for a private terrace. The restaurant serves a fusion of Spanish and Italian food and there’s a good value buffet breakfast.
Everything you need to know 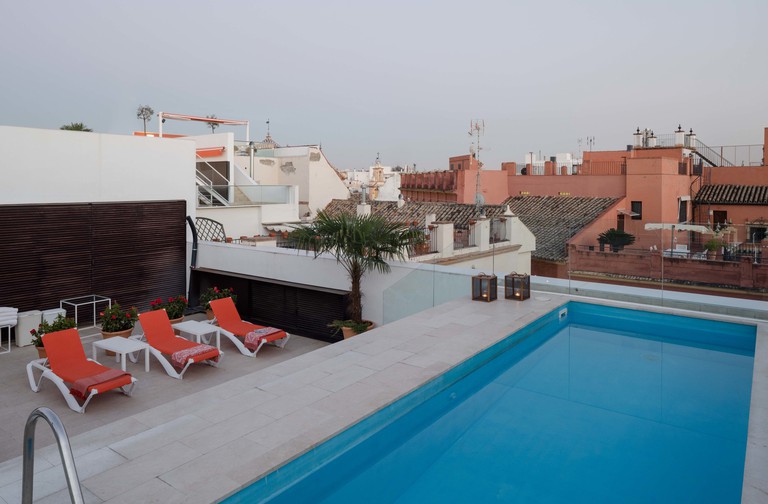 View Rooms
Also in the Santa Cruz neighbourhood, this elegant hotel is named after Alfonso X of Castile, a king, poet and man of letters, arts and science, who was a lover of Seville and bequeathed the city architectural gems such as the monasteries of San Clemente and Santa Clara. Given its location it would be a shame not to have a rooftop pool and the hotel doesn’t disappoint, allowing you take in city panoramas by the water. Don’t forget to order tapas and a cocktail from the Doña Beatriz de Suabia Bar on the adjacent roof terrace.
Everything you need to know 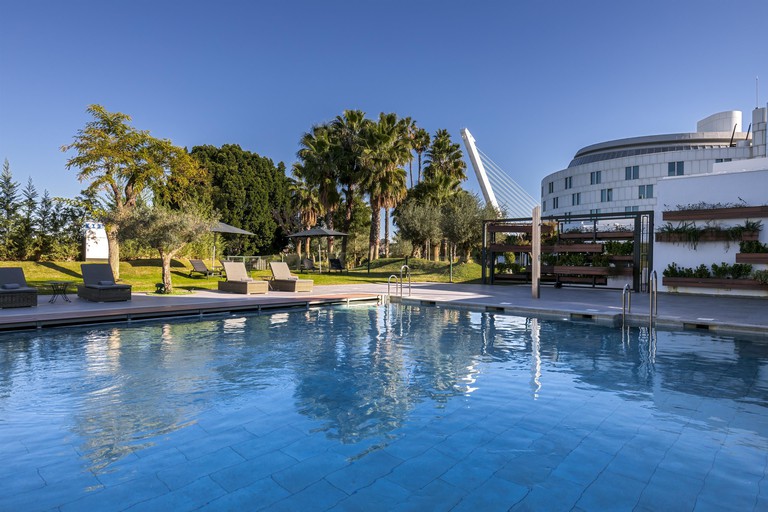 View Rooms
The bold white cylindrical structures of this riverside hotel have something of New York’s Guggenheim about them. The Barceló Sevilla Renacimiento is a little way north of the city centre, about 20 minutes on foot, but only a short stroll from the bars and restaurants of the Alameda de Hércules. There’s a large heated outdoor swimming pool, surrounded by sun loungers and greenery, which feels spacious compared to many other hotel pools in the city. Close by is Alamillo Park, one of the largest urban parks in Spain. This is also the official hotel of the Isla Mágica theme park, with VIP offers for guests.
Everything you need to know 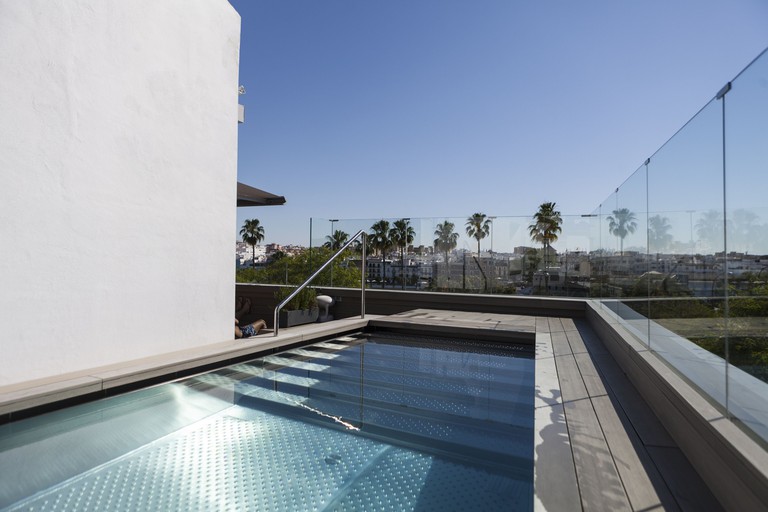 View Rooms
Another hotel by the banks of the Guadalquivir, the Hotel Kivir is located on the city centre side of the Triana Bridge. The cheaper premium rooms have views of the Arenal Market, while all others face the city, the river and the bridge, with the most exclusive having private terraces. The Fluvial Restaurant serves dishes with fresh Andalusian ingredients and the Kivir Skyline terrace bar is a wonderful place for a cocktail. Relax on the sundeck of the rooftop pool area in a hammock to soothing music.
Everything you need to know

The Level at Melia Sevilla 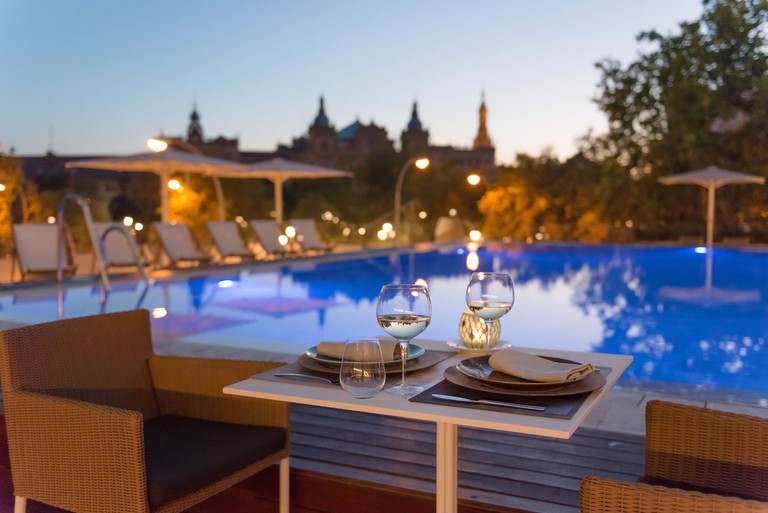 View Rooms
Just behind Plaza España and Parque de Maria Luisa is The Level at Melia Sevilla. It’s aimed predominantly at business travellers but is well worth looking at for pleasure too, thanks in part to the 130sqm (1,400sqft) outdoor pool with a large sundeck and views over the plaza. There’s a snack bar next to the pool for ordering food and drink direct to your sun lounger. The main dishes at the Quimera Restaurant are made in a Josper charcoal oven, adding a delightful smokey barbecue flavor.
Everything you need to know 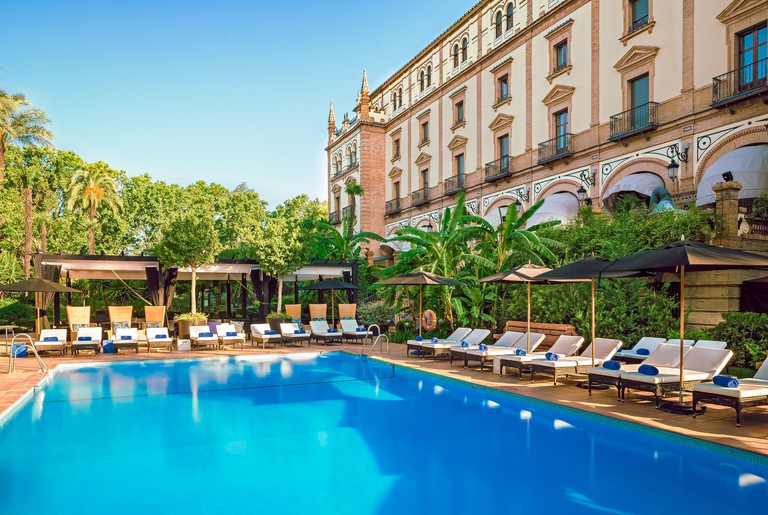 View Rooms
This grand Marriott hotel was commissioned by Alfonso XIII, King of Spain, to host international dignitaries during an international exhibition in 1929. It’s across from the neoclassical Universidad de Sevilla and within walking distance of Moorish palace, the Royal Alcázar of Seville. There’s Andalusian style with Moorish influences in the architecture of the hotel, and a rather more modern outdoor swimming pool to enjoy. All the bathrooms in the guest rooms are inlaid with marble floors, tiled in characteristic Sevillian ceramic. There are plenty of dining choices, from Andalusian cuisine in Restaurante San Fernando, to Catalonian- and Andalusian- inspired plates at Ena. Make sure to try a cocktail in the art deco surroundings of Bar Americano.
Everything you need to know 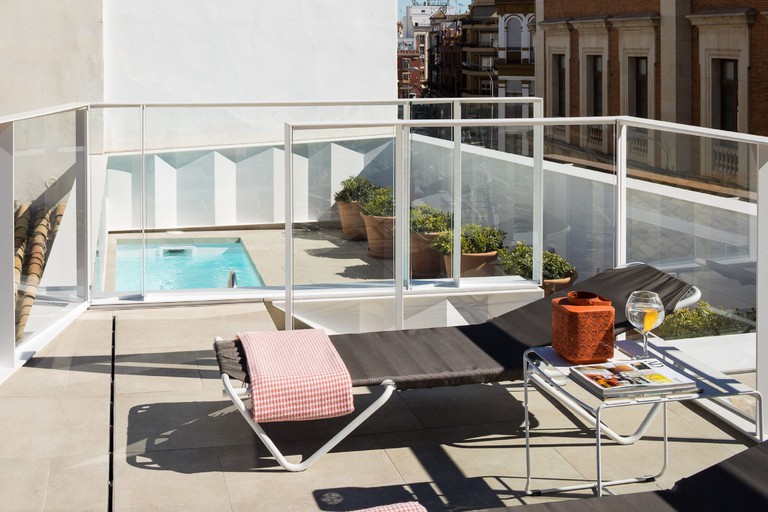 View Rooms
There’s been an inn on this site for more than 400 years and the hotel is still going strong, so they must be doing something right. The rooms at the Posada del Lucero are decorated in bright and neutral colours, and have either courtyard or street views from floor-to-ceiling windows or a private terrace. Part of a modern rooftop extension, the pool overlooks the roof tiles of the old inn courtyard and has jets at one end. A tasty breakfast buffet is served in El Guadarnés cafe, which was the tack room of the former hostelry and is adorned with a selection of saddles on the walls.
Everything you need to know 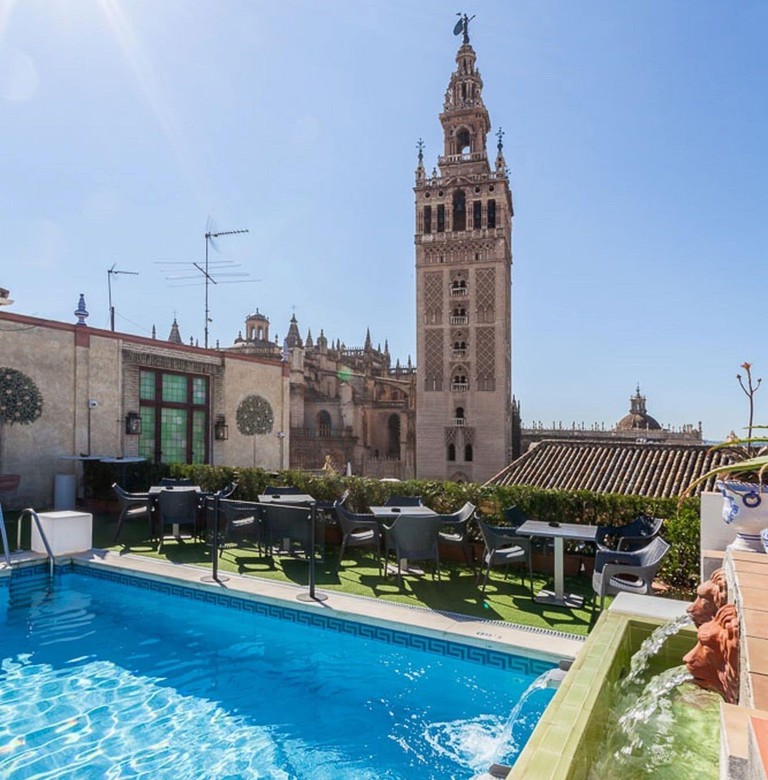 View Rooms
At the Hotel Doña María, enjoy Centro Histórico views from the terrace bar and rooftop swimming pool without having to shell out as much as you do at the more exclusive spots in the city. Admire the cathedral, Giralda Tower and Plaza Virgen de los Reyes, all while enjoying a cocktail or beer accompanied by good music and a fun atmosphere. The rooms all have flat-screen TVs, air conditioning and minibars.
Everything you need to know 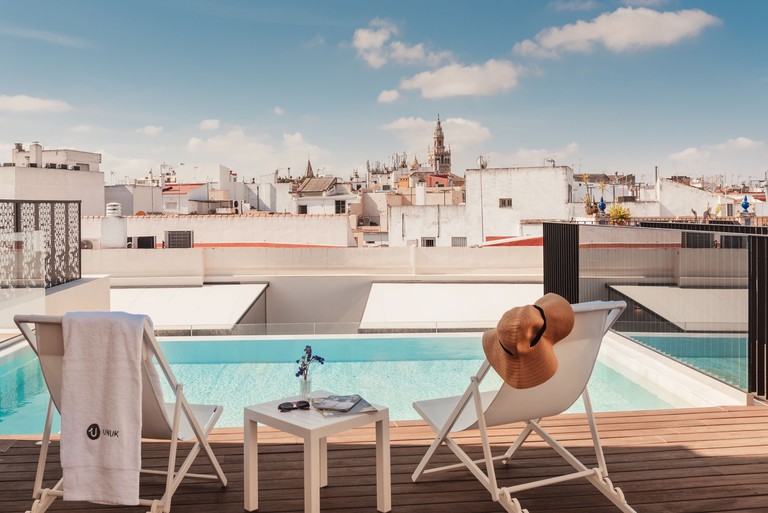 View Rooms
Another with a Centro Histórico location, Unuk Soho has city vistas from the rooftop pool. It’s located in the exclusive Soho Quarter, historically a haunt of artists and traditional tradesmen. The Plaza del Salvador and the Flamenco Museum are 400m (1,310ft) away. Heritage food restaurant Recoveco serves traditional Andalusian delicacies.
Everything you need to know 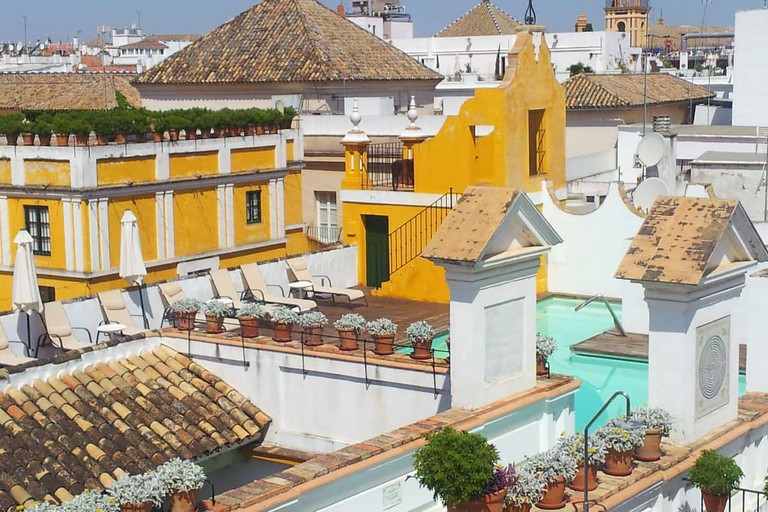 View Rooms
The spa at Las Casas de la Judería is named Hispalis, which is what Seville was known as when it was first built in the 8th century. There are both heated and unheated pools, a flotarium, Turkish bath and relaxation hot bench. The hotel comprises what used to be 27 different houses in Santa Cruz, hence the name – ‘the houses of the Jewish quarter’. There are 134 rooms linked by a series of passageways, plus gardens and patios, perfect for enjoying the dappled light while dodging the powerful Andalusian sun. Many of the rooms have original wooden beam ceilings and modern hydromassage bathtubs.
Everything you need to know 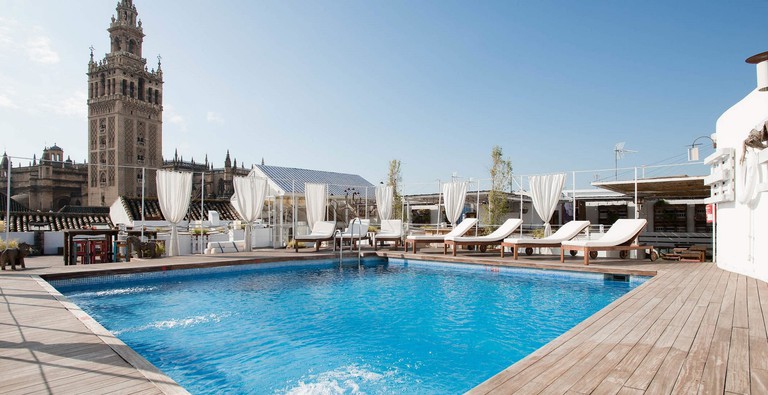 View Rooms
The Fontecruz Sevilla Seises hotel occupies a restored 16th-century palace, with an intriguing blend of Roman mosaics, Moorish colonnades and Renaissance furniture. The rooftop swimming pool is part of the Pura Vida terrace, with wooden decking and white throws hung on rails to keep the sun off your lounger. There’s an Andalusian-style breakfast buffet serving local and organic produce.
Everything you need to know
Give us feedback