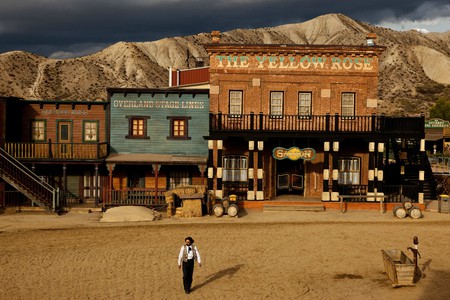 A new photo book lifts the lid on a region of Spain that was transformed from a sleepy desert backwater into the toast of Hollywood, and then back again. We speak with photographer Mark Parascandola about what drew him to the area, and what he learned in the process about Hollywood’s relationship with Spain. 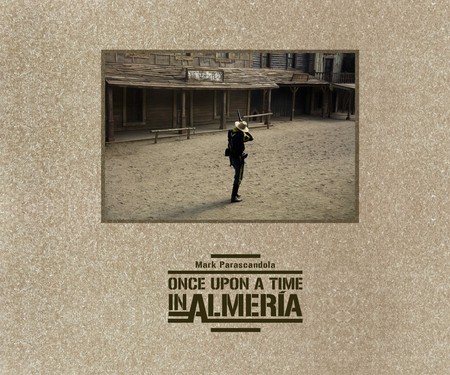 What drew you to Almería, both personally and as a photographer?

My mother’s family is from Almería, so I have a personal connection there. My mother went back and forth to Spain while growing up, so we retained close connections with our family there and made many trips while I was a child. As an adult and a photographer, I became fascinated by the desert landscapes of Almería and its unique quality of light – the same light that brought filmmakers back there over the years. I also remember visiting some of the old western movie sets as a kid.

Can you tell us a little bit about how the film industry developed in the region?

In the 1960s, Hollywood was in a crisis of its own. The studio system, in which films were made entirely on studio lots, was being replaced with a new model, where Hollywood studios relied on independent producers. At the same time, competition from television pushed film studios to stand out with large-scale productions and exotic locations. Spain offered both spectacular locations and low production costs. It was the need to cut costs that led producer Sam Spiegel to move the Lawrence of Arabia crew from Jordan to Spain.

In 1964, the Spanish government revamped its film production rules to attract foreign investment in Spain. There was no specific effort to bring filmmakers to Almería, however. In fact, the province was difficult to reach, a long day’s drive from Madrid on rough roads. But the distinctive landscapes and perpetual sunshine made the journey worthwhile.

Did members of your grandmother’s family in the region work in the film industry?

My grandparents left Spain before the Civil War, so they were not directly involved in the film industry. But almost everyone in Almería has at least one friend or family member who worked on the movies in some way, sewing costumes, doing carpentry, driving movie crews around, or serving as extras on camera. 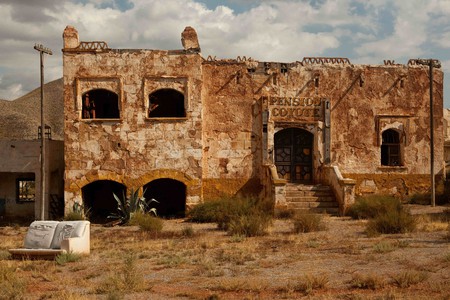 What role did Franco play in attracting Hollywood to shoot in Spain? Was it something he pushed for?

In the 1950s, following World War Two and years of international isolation, Spain was on the verge of bankruptcy. In 1957, Franco reshuffled his cabinet, bringing in a cohort of young bankers and economists. Under these ‘technocrats’, the government embarked on a new strategy: removing economic barriers and opening its borders to trade and investment. A key pillar of this endeavour was the promotion of mass tourism. In addition to bringing in money, Franco believed that tourism would rehabilitate Spain’s international image to the rest of the world.

Franco’s regime was particularly interested in winning American ties. It developed relationships with American businesses such as American Express, TWA, Hilton, and – ultimately – Hollywood production companies. Manuel Fraga Iribarne, Spain’s Minister of Information and Tourism during the 1960s, traveled to the US to meet with Hollywood film studios and encourage them to work in Spain. The Spanish government established a system of co-production to attract foreign filmmakers by offering financial incentives. They believed that Spain’s image and economy would benefit from the association with Hollywood glamour and the dissemination of larger-than-life images on theatre screens around the world. 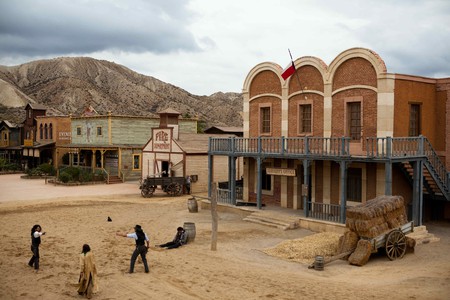 What are some of your favourite films shot in Almería?

My all-time favourite would have to be Lawrence of Arabia. Aside from being a monumental and visionary film, it was also one of the first large productions to make use of Almería. The Good, the Bad and the Ugly and Once Upon a Time in the West are among my favourite westerns and combine the original sets built on location with the desert landscapes around Tabernas. Less known is that Antonioni’s 1975 film The Passenger with Jack Nicholson included sequences filmed (and set) in Almería, including a classic long take at the end of the film outside a bullfighting ring near the coast. 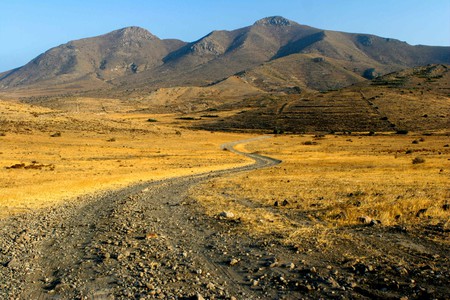 How accurate were the Wild West films, and how much did the films shot in Almería influence our image of the Wild West?

The westerns being made in Almería during the 1960s and 70s, especially the work of Sergio Leone and other Italian ‘spaghetti western’ directors, marked a stark departure from the classic American westerns of John Ford and John Wayne. The films of Leone and Sergio Corbucci were much darker, often blurring the traditional lines between good and evil. Some critics at the time denounced the casual violence in these films, but the films were immensely popular.

Many Americans are surprised to hear that many of these films were made in Spain and assume that the photographs were taken in Arizona. I think that shows how much our views of the American West have been influenced by these movies. 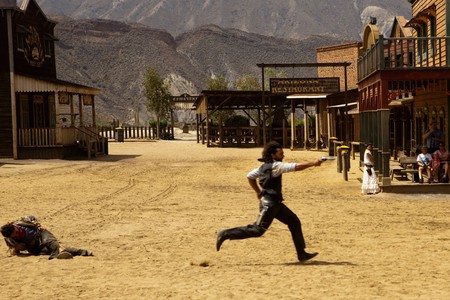 You say that during the 1950s and 60s, Almería was on the verge of becoming the next Hollywood .What stopped it from fulfilling its potential, and what effect did this have on the local population?

By the early 1970s, as the Spanish economy expanded, Spain was less of a bargain. Producers moved to cheaper locations, such as Morocco and Mexico. In Almería, emboldened land owners became greedy, with some asking exorbitant prices for the use of their property by film crews. The government had promised to build permanent film production facilities in Almería, which would have provided more infrastructure to retain the film industry, but this plan failed to materialise. The regular work the film industry had brought over the years disappeared. The film industry was eventually replaced with another industry – today miles of landscape in Almería are covered with plastic greenhouses where vegetables are grown for sale across Europe. A recent Spanish television series, Mar de Plastico (‘Sea of Plastic’), is set amongst the greenhouses. 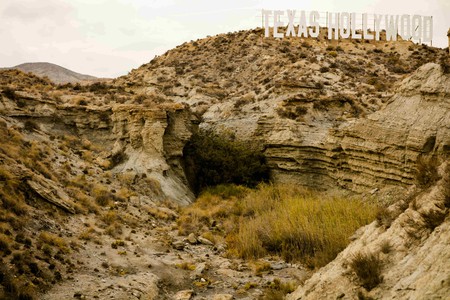 What were the most interesting factual nuggets you discovered when researching the book?

Almería is a small place, but I was surprised to learn how film productions often overlapped and competed with each other for prime locations. According to one story, Michael Caine, while making the World War II film Play Dirty (1969), accidentally showed up to work at an American Civil War set just on the other side of the hill. On the main shopping street of Almería, it was not unusual to see Hollywood film stars sitting at a sidewalk café.

Interestingly, one of the most infamous nuclear accidents occurred nearby, when the US Air Force lost a hydrogen bomb off the coast of Almería at Palomares in January 1966, at the height of Hollywood activity in Spain. Worried about negative impacts on tourism in Spain, Minister of Information and Tourism Fraga Iribarne gave a press conference while standing in the Mediterranean Sea, alongside US Ambassador Angier Biddle Duke, to demonstrate that the beach was safe. 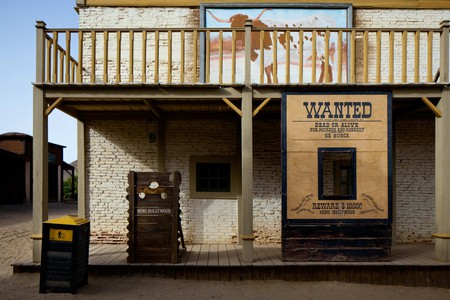 Which areas of Almería would you recommend travellers visit today?

There are three western towns built for the movies that are open for tourists, all located around Tabernas. It is worth visiting all three, as they each have their own atmosphere. My favourite is Fort Bravo/Texas Hollywood, which retains its rustic look and is still used in television and films today. I would also recommend driving some of the side roads around Tabernas to experience the desert landscape. Additionally, the natural park at Cabo de Gata, the southeasternmost corner of Spain, remains undeveloped, with lots of isolated beaches, and was used in Lawrence of Arabia and many other films. Also near the park is the historic Cortijo del Fraile, reached via a dirt road from the town of Los Albaricoques, which itself was the site of the final gunfight in For a Few Dollars More.

All images are from the book Once Upon a Time in Almeria: The Legacy of Hollywood in Spain by Mark Parascandola, published on December 12 by Daylight Books.