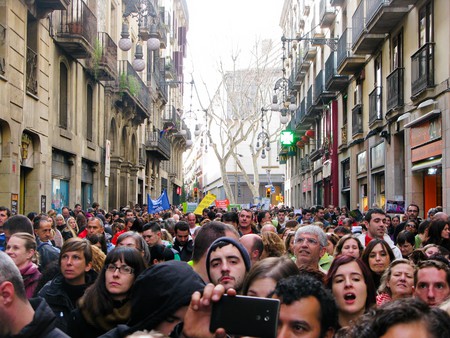 The news has recently seen a wave of popular demonstrations and protests in Barcelona, with many residents decrying the rising cost of housing, the shortage of accommodation and the feeling that the city is being ‘overwhelmed’ by tourists. One of the most visited cities in the world, it seems that the Catalan capital may just be falling victim to its own success. Here’s what you need to know.

It’s no secret that in recent years there has been a growing tide of resentment from some of Barcelona’s residents towards what they see as an out of control tourist industry. The 2014 documentary Bye Bye Barcelona portrays a city being ‘lost’ to tourism as spaces such as the Gothic Quarter, Park Güell and the Sagrada Família become virtual no-go areas for local residents. 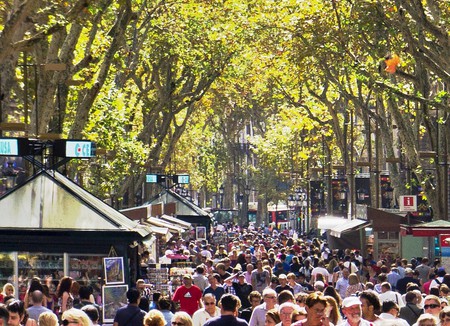 Since the 1992 Olympic Games Barcelona has become one of the most popular tourist destinations in Europe, welcoming an estimated 32 million tourists per year. The local council has pursued measures to make the city tourist-friendly, focusing on public transport, accommodation and ease of access to the main sites. In the private sector, restaurants, hotels and tourist shops have all benefited from the boom of visitors and the sector – which accounts for about 14% of the economy – is one of the biggest sources of employment in the city.

The left-wing activist-cum-politician Ada Colau was elected mayor of Barcelona in May 2015 on a program which among other things promised to address the housing problems the city faced and the challenges posed by tourism. Since then the local council has introduced new legislation regulating the number of new hotels and tourist accommodation which can be created in certain key areas, namely the Gothic Quarter, the Born, parts of Eixample and Poble Sec. 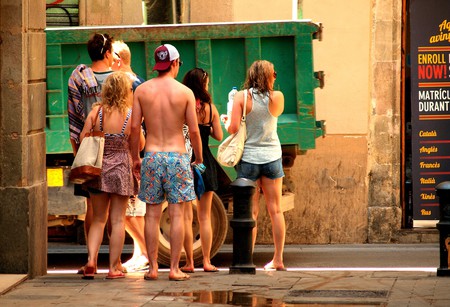 Short-let rentals and the problem of housing

One of the first steps taken by the local government was to crack down on the online room-letting website Airbnb (as well as rival companies such as HomeAway). The company has been accused of allowing private owners to let out whole apartments for short-lets without requiring proof that the owners have the required tourism license from the council.

Part of the appeal of short-lets is the fact that owners can make many times the amount they would by renting out on a long-term basis. A flat going for €1,000 a month can easily fetch €200 a night on websites such as Airbnb. As a result many home-owners have opted for short-lets only, creating a shortage in the long-term rental market in the city. Where flats are available for long-term rental, many locals struggle to keep up with the rising costs of rent due to demand superseding offer: the letting website Idealista noted an average 16% increase in prices for the year 2016. 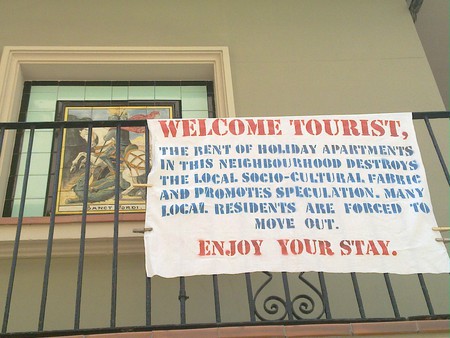 A sign in the Barceloneta neighbourhood | © Toni Hermoso Pulido

As a result, Airbnb has for many become the face of the housing problem in the city, as many residents find themselves unable to find a property to rent within the city centre. Certain go so far as to say it is threatening the social fabric of certain neighbourhoods as the younger generation are unable to live among their elders and many find themselves priced out of the areas they have lived their whole life.

Horror stories in the news have done nothing to ease the tension – one woman reportedly had to squat her own apartment to regain access to it after she found out that the person she was renting the flat was illegally subletting the flat on Airbnb. News that one of the Airbnb managers had themselves illegally listed a sublet flat on the website did nothing to appease anger towards the company. The conflict culminated in 2016 when the city of Barcelona fined Airbnb some €600,000 for refusing to release the records of all users who did not comply with licensing requirements. 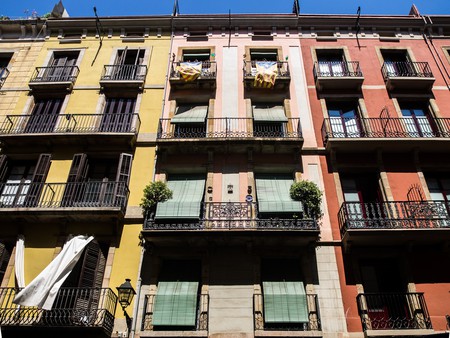 Scapegoat or genuine threat to Barcelona’s housing situation, Airbnb has been in ongoing talks with the local council to reach a solution here in Catalonia. Earlier in July the two parties finally came to an agreement as Airbnb has accepted to remove adverts for illegally rented flats from the site. The city had threatened to renew the fine this year if there was no change in the company’s response.

Whether this latest agreement will appease the situation on the ground rests to be seen as the tourist season hits its peak in August. With many of Barcelona’s residents leaving the city for annual holiday, September will be a telling month for the local council.