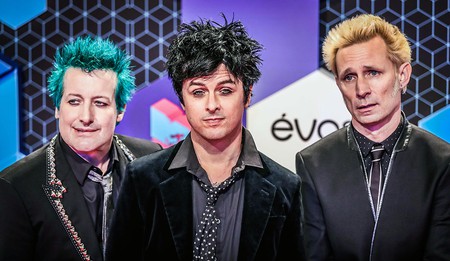 Green Day have apologised after they were blasted for playing at Mad Cool festival immediately after acrobat Pedro Aunión Monroy fell to his death.

The band released a statement on their social media channels saying they were ‘heartbroken’ after Aunión Monroy fell from a cage during a stunt at the event in Madrid on Friday night.

The 42-year-old acrobat, who lived in Brighton, is believed to have fallen 30m (100 ft.) while performing in between sets by Alt-J and Green Day.

He is thought to have been wearing a harness as the box was suspended from a crane.

Our thoughts and prayers go out to his family and friends

Paramedics spent 30 minutes trying to revive him but were unable to save him.

The band revealed they were told a ‘security issue’ had delayed their set, but weren’t told exactly what that was.

‘Everything seemed normal. The crowd and fans had a good time. We got off stage and drove back to our artist compound. It was there when we were told the shocking news about Pedro.

‘All of us were in disbelief. I don’t know why the authorities chose not to tell us about the accident before our concert.

‘If we had known prior to our performance we most likely would not have played at all. We are not heartless people. The safety and well being at any of our concerts absolutely comes first. What happened to Pedro is unthinkable.’