Gràcia: A Journey to Barcelona’s Artisan Neighbourhood That Turns Into an Outdoor Exhibit 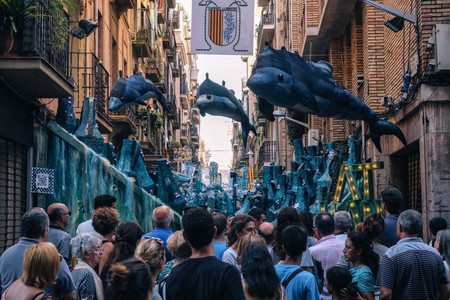 The Gràcia neighbourhood of Barcelona fosters a proud streak of artistic and anti-Fascist pride. Every August at the Festa Major de Gràcia, the residents display this identity and transform the streets into a massive, open-air, DIY art experience.

On Carrer Providencia, a narrow one-way street in Barcelona’s Gràcia district, there is a metre-tall amethyst geode standing in the centre of the road that, at any other time of the year, would be very much out of place. But with the neighbourhood’s biggest fiesta just 11 days away, this otherwise busy street is already closed to traffic. And this geode, which is actually a papier mâché decoration elaborately detailed with piercingly bright amethyst crystals, is the first of many being created in the street’s impromptu workshop. 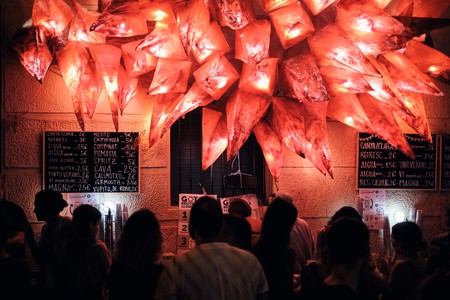 The streets of Gràcia are turned into a massive, open-air art experience | © Adrian Morris / Culture Trip

On the day I visit, about six people are toiling on other decorations that give the first clues of the year’s street party theme. This particular painted papier-mâché grey rock, elaborately detailed with exposed, piercingly bright amethyst crystals, was already completed. Close by, two volunteers are assembling other structures made of wire framing; they must be stalagmites.

“You are making a mine, aren’t you?” I ask Manolita Dominguez, the energetic red-haired president of Carrer Providencia’s association — a kind of local culture club.

“Bueno!” she exclaims. “At least we know that we are going in the right direction.”

Carrer Providencia is one of at least 24 streets that participate in the annual street-decoration competition for the Festa Major de Gràcia, easily one of the most anticipated summer festivals in Barcelona.

What is the Festa Major de Gràcia?

It’s a six-day celebration of art, music and culture that takes place in mid-August, and a fiesta that transforms dozens of streets across this neighbourhood to the point that they are unrecognisable.

Festivities launch and close with a correfoc – Catalan for ‘fire run’ – which is a parade including adults and children dressed as devils and shooting close-range firecrackers at each other and passers-by. It is a noisy and somewhat precarious initiation that sets the tone for the week’s large helpings of music, art and fun. 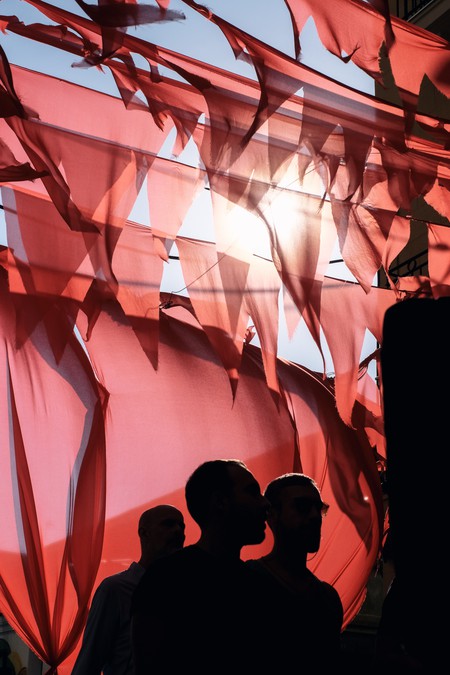 Several pop-up stages act as focal points for the Festa Major, with live-music acts playing night and day and line-ups designed to pique the interest of multiple generations. Walking about the festival over the course of a few days, you will come across everything from traditional Catalan folk bands and Cuban salsa groups to an American rock’n’roll band and a Spanish singer belting out the latest pop hits.

As well as live music and street food such as empanadas and Spanish bocadillos, boutique craft displays are set up on the streets selling a range of arts and crafts.

How the Festa Major began

The Festa Major de Gràcia is over 200 years old, and its story began with French monks. According to Josep Maria Contel, Gràcia’s resident historian and head of the Gràcia History Workshop, Franciscan monks arrived here in 1817 after the destruction of their convent during the Napoleonic Wars.

Contel continues, “In 1862, the Diario de Barcelona recorded that Carrer Ancha [today Carrer Verdi] was adorned with branches, and little by little the streets began to be decorated. The oldest photograph of an adorned street we know of is from 1894, on what is today Carrer Francisco Giner.” 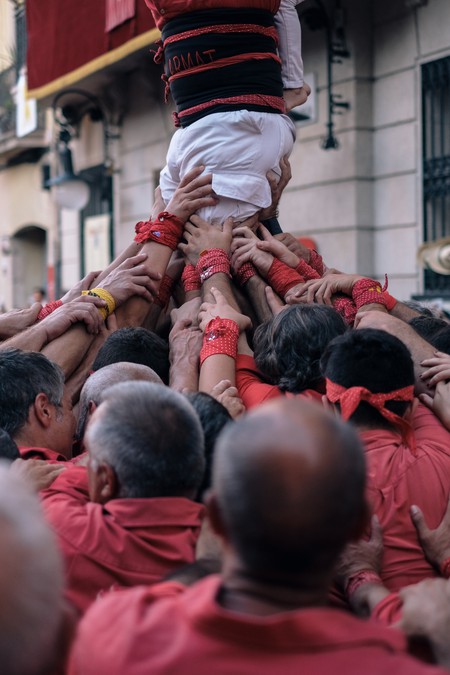 Nowadays, about two weeks before the start of the festival, streets begin to shut down across Gràcia as volunteers young and old launch into preparations for the festival. Anyone, including passers-by and holiday visitors, can help. Experts in woodwork come from far and wide to lend their services for free.

Some of Gràcia’s streets turn into full-on woodworking shops, where large structures such as castles and dragons are made by expert artisans. When associations mount large woodworks like this, they even call in the fire department for assistance. 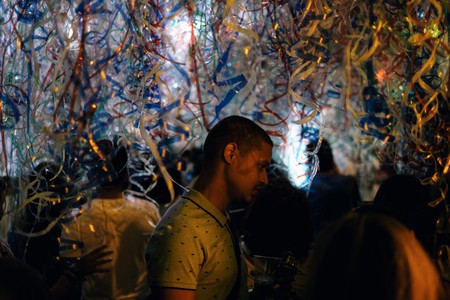 There is a purpose to all this frenetic activity. Every year, the street decorations are reviewed by a panel of judges in a competition that crowns the associations with the most creative themes. The winner of the first prize in 2019 was Carrer Progrés, one of the usual favourites to win, alongside Carrer Verdi. Progrés decided upon a Harry Potter theme, which they cheekily dubbed Harry Progrés. The centrepiece of their themed street-party experience was a towering purple and white dragon that loomed over their narrow street.

Gràcia: a neighbourhood of art and rebellion

Gràcia is the perfect setting for such a festival. Even without the unique decorations, it feels like a separate village that is distinct from the rest of Barcelona – because it was once exactly that.

“In 1897, Gràcia was the second city of Catalonia and the ninth of Spain,” says Contel. 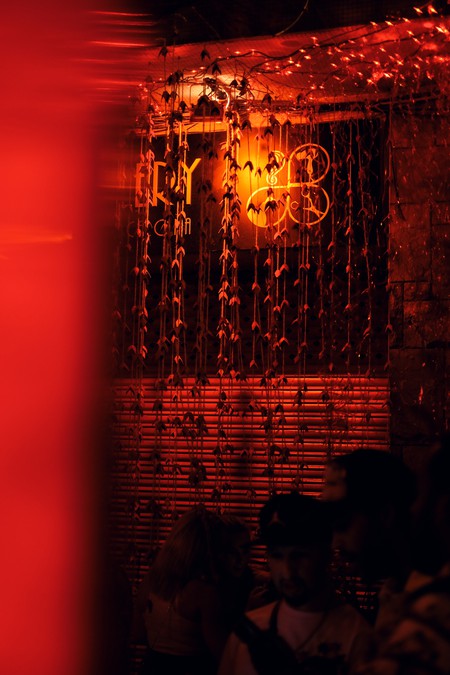 In Gràcia, low-rise buildings press against one another on narrow alleyways, making this part of Barcelona feel more like a Mediterranean village than a major neighbourhood in Spain’s second-largest city.

Home to creative and independent artisans and anti-Fascists alike, the small plazas that define life in Gràcia are often festooned with banners supporting a free Catalonia and graffiti-tagged by members of Antifa, a left-wing, autonomous anti-Fascist group with a global presence. Both causes seem ever present in the neighbourhood. Just after the opening correfoc for this year’s Festa Major, someone spray-painted ‘Antifa’ across Carrer de Gran Vía, the neighbourhood’s main street that connects it to central Barcelona.

This rebellious streak has a long history in Gràcia, which was autonomous from Barcelona for several decades during the 19th century.

“Gràcia was an independent municipality between 1850 and 1897, at which time it joined Barcelona,” says Contel. “For this reason, Gràcia has always been a very important town.” 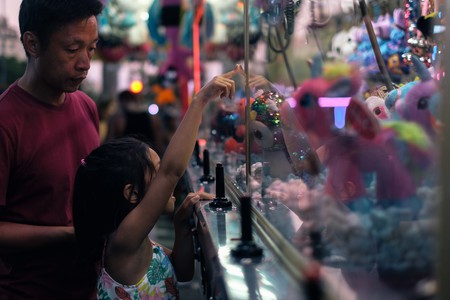 Continuing a legacy of pride

For Dominguez, back on Carrer Providencia, 2019 is the 30th time she has participated. She is a veteran of the street-decorating competition, saying, “I have always lived in this neighbourhood, and I participated in this festival since I was young.” Nowadays, Dominguez is president of her street association. The Festa Major de Gràcia owes its fame to the street associations, which invest significant time and money to create one of the most unique street parties in Europe.

Preparations for the spectacle typically start in the November of the previous year. Street associations like Dominguez’s will spend around €6,000 (£5,335) on building the unique decorations that they hope will be the envy of their Gràcia neighbours. Playing host to street parties lasting up to six days, associations can recoup some of their investment by selling shirts, merchandise, food and lots of beer straight from the tap.

But no one here competes for anything more than pure pride. “We do not win anything,” Dominguez announces. “This is just for the spirit of fun.”