From Icehouse to Ice Cream: The Story Behind Mallorca’s Oldest Café 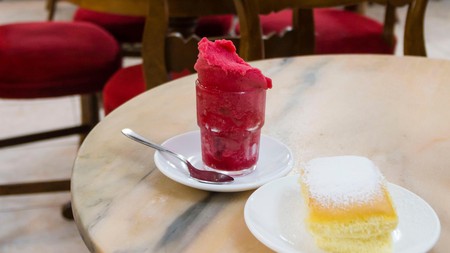 Joan de s’Aigo couldn’t have predicted that mixing the snow his men collected from the Serra de Tramuntana (the mountain range claiming most of Mallorca’s southwest and northeast) with fruit juice would continue to yield results a few centuries later. And yet, that’s exactly what happened.

Three locations in Palma bear his name, which translates to Joan of the Water, a nickname earned from selling snow from his icehouses to the capital’s residents for domestic use. There’s the most recent addition to the Ca’n Joan family, housed in a modernist-listed building right in the city centre, and an unassuming joint close to shopping hotspot Jaume III. But, without a doubt, the most iconic of the cafés is the one tucked away in Carrer Can Sanç. 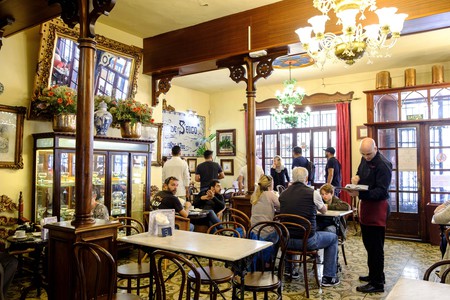 With its retro sign and creaky wooden entrance, this Ca’n Joan is as much a part of the city’s fabric as the honey-hued cathedral or the adjacent royal palace. In fact, Queen Sofia is said to be a fan of its legendary ensaïmadas (traditional Mallorcan pastries), best enjoyed with a cup of thick hot chocolate, of course.

As its tiled mural states, the building dates all the way back to the 1700s, which adds yet another layer of history to an already rich tapestry. But Ca’n Joan has not only withstood the passage of time, it has weathered the financial crises that have taken the rest of the country by storm. 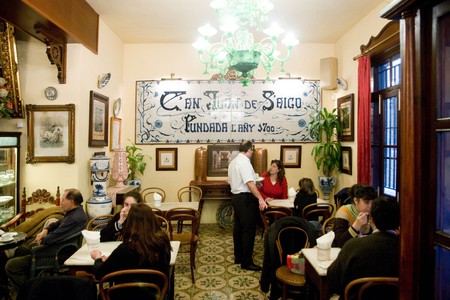 “Our business has always centred on the products typical of the island, and that’s the key to its success,” says general manager Pere Joan Massanet. “Ca’n Joan de s’Aigo has been with us for many years and, with a lot of dedication, has managed to keep old traditions alive to this day.”

These include serving, in glass tumblers, the almond ice cream – made from locally milled almonds – that was the first of Joan de s’Aigo’s creations, and baking pillowy, icing sugar-dusted cakes known as quartos. “The recipes for both the patisserie, the hot chocolate and ice cream are totally artisanal, and the city is grateful for it,” Massanet says.

The delicious food and drink are only a small part of the traditions Massanet alludes to – there are also the rituals built around it. “In the old times, all holidays were celebrated with chocolate and ensaïmadas,” explains Massanet. “For example, on Christmas Eve, there wouldn’t be a big dinner like in other Spanish regions. The tradition was to go to midnight mass before having hot chocolate and ensaïmadas.” 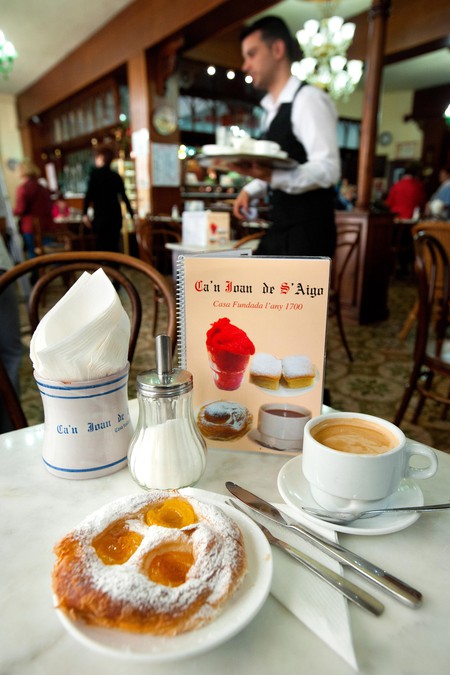 Pep Pizà, a literature teacher and long-standing Ca’n Joan patron, agrees. “Tradition is what makes C’an Joan de s’Aigo so special,” he says. As well as the traditions built around national holidays and special occasions, there are also the everyday traditions held by each city dweller, nurtured by lifetimes of dusting ensaïmada crumbs off their clothes and eating runny ice cream before it melts around the rim of the glass.

“I remember going to Ca’n Joan with my grandad and my mum – three generations doing the most natural thing in Palma. We had ice cream in summer and hot chocolate in winter,” Pizà recalls. “The tradition continues with my own children, who know just how delicious the famous ensaïmadas and celebrated quartos are.”

Ca’n Joan may be a cornerstone of Mallorcan culture in the island’s capital, but that’s not to say it’s stuck in the past. It simply knows how to innovate conscientiously, without alienating its local patrons in a bid to meet the demands of the island’s often punishing tourism industry. It’s worlds away from the joints frequented by the hens and stags flocking to Magaluf for booze-fuelled holidays, or even the families who stay in villas perched on clifftops overlooking the Mediterranean. This is a city staple, one that speaks the same language as correfocs (fire runs) for the Saint Sebastian festival or pancaritats (pilgrimages) during Easter.

Judging by the queues regularly snaking up and down the cobbled street where the café is nestled, it’s certainly being heard. But Ca’n Joan’s not-so-hidden gem status also has its downsides, as Pizà notes. “I refuse to queue to get in. This sentiment will be shared by many Mallorcans. Maybe when Christmas approaches, I fancy meeting up with the family in such an emblematic place full of memories…but always without having to queue!” 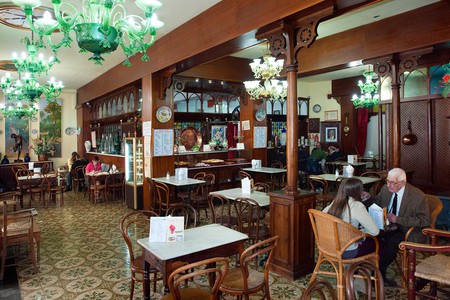 Ca’n Joan de s’Aigo is an ode to Mallorcan tradition, with generations of families passing through their doors over hundreds of years | © Robert John / Alamy Stock Photo

And yet, he is responsible for introducing Ca’n Joan to a brand-new audience – his students. Pizà teaches in a small high school in a rural village about a half-hour drive from Palma. “I want to show my students that there is more life to Palma than Porto Pi [shopping centre].”

Araceli Segreto is one such student. Pizà taught her world literature class a few years ago, and even took her and her fellow classmates to Ca’n Joan for a lesson. The café does have a slightly bohemian feel – punctuated by stained-glass chandeliers, 19th-century ice-cream vats and traditional art – and so offers a fitting background to learn about Kafka’s metamorphosis and Proust’s madeleine cakes.

“It was the first time I went,” Segreto says, “and I’ve been back many times since.”

They may not be French madeleine cakes, but there’s definitely something of the Proustian when Segreto recalls the taste of Ca’n Joan’s quartos and ice cream. “It’s the winning combination – a cloud-like quarto with half-strawberry, half-hazelnut ice cream,” she says.

Pizà agrees on the strawberry ice cream, but recommends mixing with vanilla and doubling up on the quartos. “It sounds weird, but it won’t disappoint.” With Ca’n Joan de s’Aigo’s more than 300 years’ experience making the stuff, disappointment is certainly unlikely.