A Guide To Barcelona's Neighborhood Festivals 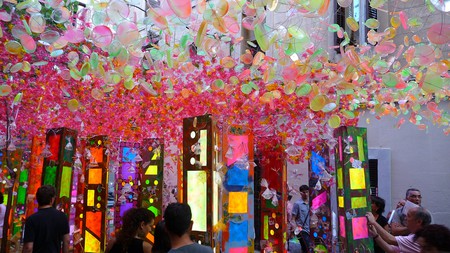 Barcelona‘s neighborhood festivals are famous for the weird, wacky, and wonderful. Check out the must-see (and eat, and drink) highlights from each barrio in our handy guide.

Barcelona likes to party. There’s a reason why the word fiesta needs no translation. If you spend the summer months in the city, it can seem like barely a day goes by when there isn’t some kind of celebration. ‘What’s this one for,’ you may ask a long-term resident? ‘No idea, do we need a reason? It’s just a good excuse for a party.’

Some of the most important parties in Barcelona are the local neighborhood ones. From Gracia to Poble Sec, from Barceloneta to Sants, most of the barrios throw some kind of celebration over the summer months.

Taking place every August, Gracia is the most famous festa major in Barcelona. This neighborhood was formerly an independent town, meaning it retains a strong sense of pride and local identity. It’s also a popular area with artists and bohemians.

For one week every summer, the streets are adorned with elaborate decorations all crafted by the people who live in the area. With a different theme chosen each year, the top three streets are awarded prizes for their decorations, and it’s a fiercely contested competition. Highlights in recent years include zombies with a large pool of red blood in the middle of the street, Alice in Wonderland, and the Amazon. 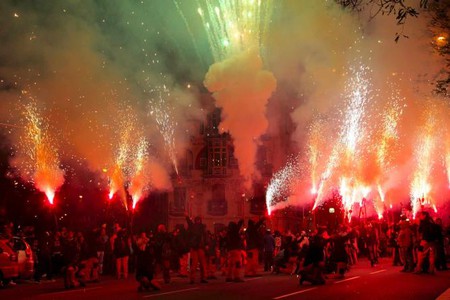 As the festival is free to enter, and because it takes place in the busiest month of the year tourist-wise, it is very crowded, especially on the weekend. So expect to line up to get into the most popular streets, such as Carrer Verdi. This is not helped by the constant taking of selfies in front of absolutely everything!

You’ll also find live music, stalls selling food and drinks, and correfocs, which is a Catalan tradition where residents dress as devils and set off fireworks as they parade along the street. If you want to avoid getting burnt, it’s a good idea to either wear protective clothing or keep well back. You can buy the guide for €1 to help you plan your week.

Aside from the decorations Gracia – and other neighborhood festivals – see locals from the area come together to share food and drinks, sitting down at tables on the street to enjoy what each person has brought.

Poble Sec – a district at the foot of Montjuic Mountain – holds another extremely popular festa major. It also features correfocs, as well as gigantes (scary looking giants that parade through the street), sardanes (the local dance), and castells where (crazy) people climb on top of each other in some kind of formation to form human towers. This is another dangerous activity where people have been known to fall and get hurt, but it is a spectacular sight and one not to be missed. 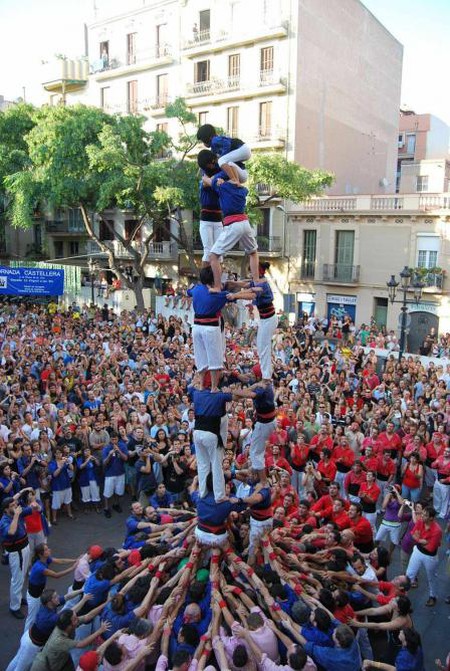 Next on the list is the Festa de Sant Roc, which is the Gothic Quarter’s annual festival. As well as featuring the usual correfocs, parades, and castells, there are some unique highlights including the cucanya contest, which is a children’s game involving walking across a revolving greasy pole to win a prize. For adults, there is a drinking competition where you must swig large quantities of wine from a porró carafe.

Sants – a local area with few foreigners and even fewer tourists – is a smaller version of Gracia, with a focus on live music. Residents do decorate some of the streets but it’s much less crowded. With the Espanya Industrial Park nearby, there is plenty for children to do with concerts for the kiddies, bouncy cancels, and fun running and bike races.

You’ll also get a sense of the real traditions of the area, with sardine cookouts, games of dominoes, craft fairs, board game tournaments, botiffara (a Catalan sausage) lunches, and plenty of Vermouth.

Most neighborhoods do have some form of festa major, but the rest tend to be small in comparison. Raval (diversity- and music-focused), Poble Nou (art- and community-themed), and Barceloneta (beach- and sea-themed), all bring together live music, food, gigantes, correfocs and castells. Sant Antoni‘s festa major stands out, being held in January to celebrate the feast day of their saint. Here the unusual (and definitely unique) highlight involves a parade called Tred Tombs where priests bless residents’ pets.

While it’s not technically a neighborhood festival, special mention goes to the festa of La Merce, which is the Saint of Barcelona. For a week in September, the city is alive with concerts, theater, wine tastings, parades, food stalls and more, before culminating in a giant fireworks display at Plaça de Espanya.

But what makes these festivals must-dos for the summer is the sense of community that each one provides. In a city where it can be easy to feel like an outsider and that you’ll never be accepted by the locals, a festa major is an opportunity to get to know your neighbors and feel like you belong.