Everything You Need To Know About The Nit De Sant Joan 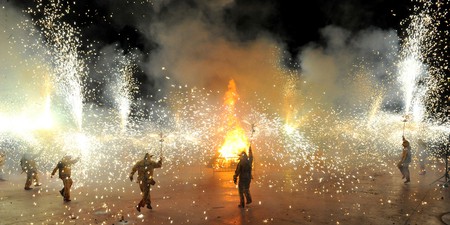 Celebrated on June 23rd and 24th each year, Sant Joan is a special date in the Catalan calendar which marks the summer solstice and the birthdate of Saint John the Baptist in the Christian faith. Crowds gather with anticipation for the colorful firework displays which light up the city the night before the Dia de Sant Joan when families gather for a slice of the special cake known as coca de Sant Joan.

The History Of Sant Joan

The exact origins of the celebration of Sant Joan as it is known today are unclear but it’s widely understood to be a Christian celebration of the summer solstice, also known as Midsummer. This important date has been celebrated by cultures across the world since a time long before Christianity and continues to play an important role in local culture in a number of countries, such as Sweden where it is one of the biggest celebrations of the year. The summer solstice is, in fact, two days earlier in the northern hemisphere, on June 21st, however, the Christian celebration is set to coincide with the birth of Sant John the Baptist, or Sant Joan in Catalan, born six months before Jesus on June 24th. Anyway, most of the celebrations take place on the eve of Saint John’s Day, known as the Nit de Sant Joan or la Revetlla de Sant Joan. 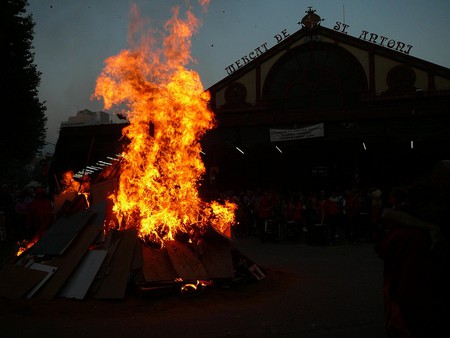 It’s on June 23rd that the celebrations of Sant Joan really take place, as locals head to their favorite spot to admire the spectacular firework displays which are organized across Catalonia. Traditionally the eve of Sant Joan was celebrated across Catalonia and other parts of Europe by lighting large bonfires which would be kept going throughout the night to give light and warmth to those gathered to celebrate. In Barcelona alone there are a number of displays organized by both public places such as museums, clubs and restaurants, as well as many private celebrations. These can best be enjoyed from above, either on the slopes of Montjuïc or on one of the city’s many rooftop terraces. Another highly popular place to gather is the beach, where in addition to being able to enjoy the many firework displays taking place along the coast, there are a number of bonfires organized in traditional style. A word of caution though, equally popular are firecrackers which tend to be detonated at random and without much warning. But it’s not just in the Catalan capital that Sant Joan is an important celebration, each municipality will usually put on their own fiestas including not just fireworks and bonfires, but a whole range of traditional displays such as correfoc (a fire run), castellers (human pyramids) and other performances.

One of the other important elements of the Sant Joan celebrations is the special cake known as coca de Sant Joan. This large, flat pastry is usually very sweet and is typically made of candied fruits, marzipan or cream. Other variations of the coca include savory versions with bacon and pine nuts or even vegetables and tuna. Traditionally the cake would have been served alongside a glass of dessert wine, although today most households prefer to drink a glass of Cava instead. Some say that a true coca de Sant Joan needs to be twice as long as it is wide and there are believed to be over 1.6 million cocas sold each year during Sant Joan. Those brave enough might attempt to bake their own cake at home, but most households purchase their coca from the local bakery.

Amongst the many superstitions and myths surrounding the night of Sant Joan, one such belief is that on the eve of Sant Joan many of the local herbs and plants take on beneficial properties which will bring good luck, good health and good fortune to their bearer. Therefore it’s a tradition for families to go for a walk through the woods to pick wild herbs which they offer to their loved ones in small bouquets, to be kept throughout the year.

Another tale, popular with the younger generations, is that on the Eve of Sant Joan mythical creatures such as witches, goblins and trolls are more likely than on any other night to appear and play tricks on passers-by. For this reason it is typical to see people in fancy dress, disguised as witches, devils or other sorcerous beings. All in all this is an important date in the Catalan calendar with a long history of religious and pagan celebration which continues to enchant and delight revellers of all ages.