Everything You Need To Know About The Catalan Correfoc 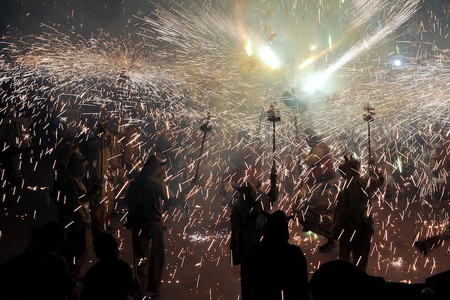 If you’ve ever had the chance to witness a correfoc in Catalunya, you’ll know just how impressive these traditional pyrotechnical displays are. Evolved from a medieval practice known as Ball de Diables, the correfoc is a popular performance in which Good and Evil come head to head in a spectacular way – which isn’t without its risks for bystanders.

The correfoc, literally meaning ‘fire-run,’ is a type of open-air performance during which people dressed as devils and other monstrous creatures arm themselves with pitchforks and set off fireworks in the crowd. If it sounds like a health and safety nightmare, it’s usually relatively safe, as those who come to watch the correfoc usually come prepared with clothing to protect themselves from any eventual burns. And they need all the protection they can get as those participating in the correfoc are expected to get as close as possible to the evil creatures and ‘run with the fire.’ 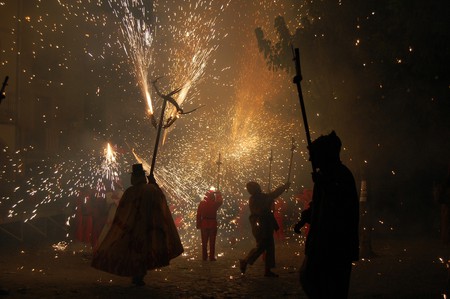 The correfocs come in all shapes and sizes, and each town may have its own customs and traditions with regard to how the correfoc is carried out. Usually each town will have its own collection of monstrous creations that reappear year after year to the delight (or fright) of the local participants. In larger correfocs, there is usually a central float from which the fireworks are distributed and which serves as the central base for the devils. In smaller correfocs, each devil has their own supply of fireworks and disperses them themselves through the crowd as they wish.

Where does it come from?

The correfoc is a relatively recent addition to Catalan folklore, having really only gained widespread popularity across Catalunya in the 1980s and 1990s. The practice is believed to have emerged as a spontaneous interaction between spectators and participants in the traditional Ball de Diables or ‘Devil Dances.’ This theatrical performance saw performers dressed as devils recreate the duel between Good and Evil in a spectacular pyrotechnic performance involving many fireworks. Originally a feature of medieval street theater, the Ball de Diables were soon adopted by the Church, who organized performances for religious occasions such as the feats of Corpus Christi. 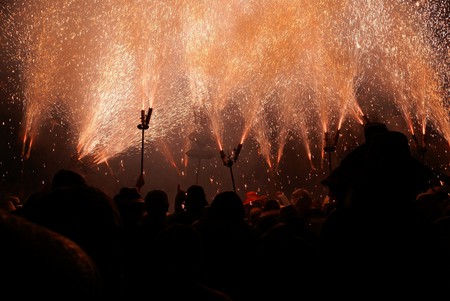 In the years following the death of General Franco, Catalunya underwent a period of cultural revival during which it consolidated much of its traditional and folklore heritage. It was around then that the correfoc as it is known now established itself as a popular feature in many public celebrations and holidays.

When do they take place?

The simple answer would be, nearly anytime there is something to celebrate in Catalunya, with the correfoc having become such a symbol of Catalan identity and so deeply entwined in the fabric of local celebrations. In Barcelona, the celebration of the city’s patron saint La Mercè on September 24th is always accompanied by an impressive correfoc that takes place in the city center. Owing to the size and number of spectators, this is usually a ‘watch-only’ show where spectators stand back from the show. However, throughout the rest of Catalunya and in Barcelona, the Festa Major of each town or neighborhood is another great occasion to witness participants young and old delight in the excitement of the pyrotechnic show. For being usually smaller, these are much better occasions for getting up close and personal with the devils and monsters. 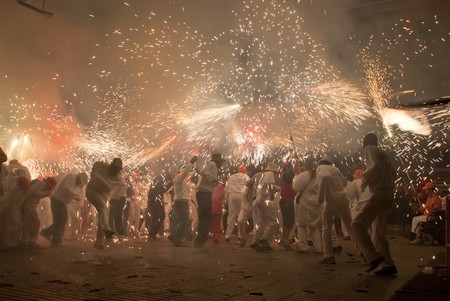 Good vs Evil in the correfoc | Carlos Alzuria
Give us feedback