Everything You Need To Know About Spanish Sherry 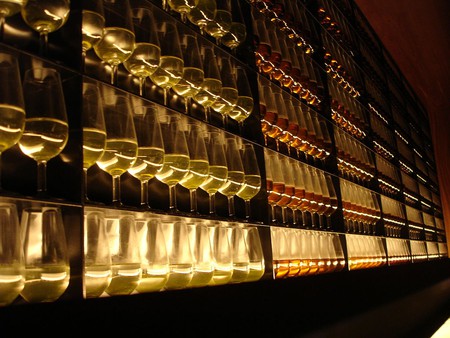 Mention the name ‘sherry’ to an English person and the first thing that comes to mind is probably an image of their grandmother sipping delicately from a glass. But sherry, or ‘Jerez‘ as it is known in its birth country of Spain, is a serious drink with centuries of tradition and history. The drink is currently enjoying something of a revival among younger generations of curious drinkers, so read on to find out all the basics about this most classic of Spanish drinks.

The Ancient Origins Of Jerez

Although Sherry was first produced in Spain, it was the Moors, who invaded Spain in the 8th century, that introduced the technology required to fortify wine. Although there is evidence of wine making occurring in Spain as far back as 1100BC, it was only when introduced to the process of distillation that local producers were able to create fortified wines and brandies. The names ‘Sherry’ and ‘Jerez’ both come from the Arabic transliteration ‘Sherish‘ (شريش), which was the name of the town where the drink was first produced in Spain. By the 16th century, Spanish Jerez was widely considered the finest wine available throughout Europe. It was also at this time that the drink’s ongoing relationship with the United Kingdom first began. Notoriously, upon conquering the southern Spanish town of Cádiz in 1587, Sir Francis Drake brought back nearly 3,000 barrels of sherry to England with him, creating something of a taste for the drink among his countrymen. Today the name ‘Sherry’ is exclusively reserved to fortified wines produced between Jerez de la Frontera, Sanlúcar de Barrameda, and El Puerto de Santa María, in the Cádiz province of Spain. 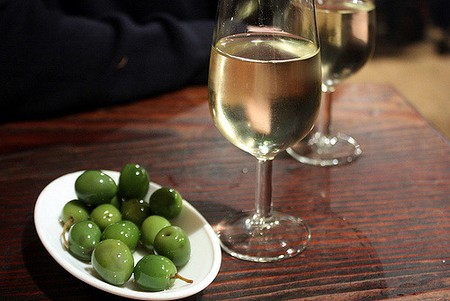 What Actually Is Sherry?

Those unfamiliar with the drink might be wondering what Sherry is and how it differs to ordinary wine or spirits. Technically, Sherry is what is called a ‘fortified wine,’ meaning that it has a stronger alcohol content than regular wine. The basis for Sherry is wine produced by the fermentation of white grapes, sugar and yeast, which create alcohol. Crucially, the next step of the process is for the wine to be blended with a grape brandy called destilado. The brandy is created by distilling wine through a process of extraction which enables the alcohol contained in the liquid to become concentrated. As a result, it becomes possible to achieve higher levels of alcohol (somewhere between 35-60%) than would occur through natural fermentation alone (usually no more than 14%). One of the main differences between Sherry and other fortified wines, such as Port, is that the distilled alcohol is only added once the fermentation process is over, whereas in Port it is added half way through the fermentation process. This modifies the natural reaction between the sugar and the yeast, which creates the alcohol. 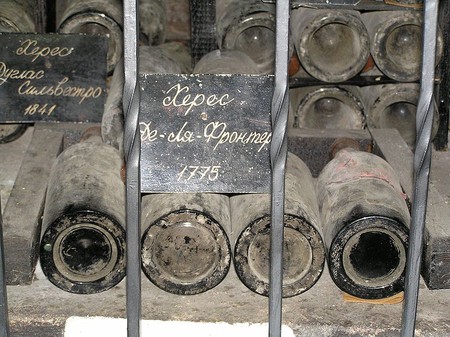 A Very Special Method Of Aging

Once the wine and brandy are blended, comes the time for the Sherry to be aged, giving it its smooth flavor and balance. The young Sherry is put in large wood barrels and aged through a traditional process known as solera. This is a centuries-old method involving anywhere between three and nine barrels of Sherry, which were filled at different intervals (usually a year). At the end of each year, part of the content of the oldest barrel is extracted and bottled for consumption. That barrel is then topped up with liquid from the second-oldest barrel, which is in turn topped up from the third-oldest and so on and so forth. This method was introduced as a way of introducing consistency in the quality and flavor of the sherry from one year to another. Seen as no barrel is ever completely drained, there is always a part of the previous years’ content that blends with the remnants of the oldest barrel. It is rumored that in some bodegas there are traces of Sherry from 100 years ago still contained in the oldest barrel of the solera system. 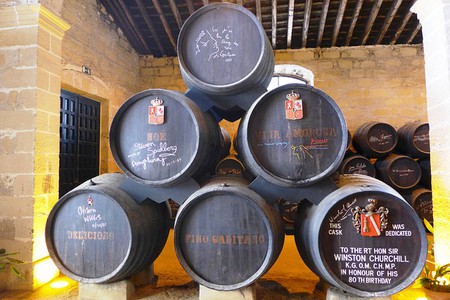 The Different Types Of Sherry

There are a variety of different types of sherry which vary greatly in aroma, alcohol content and sweetness. Whereas most dry Sherries are predominantly made from Palominos grapes, sweet Sherries are made from either Moscatel or Pedro Ximenez grapes. The sweeter Sherries are usually referred to by the name of the grape itself, as well as ‘Cream,’ which refers to a blend of a sweet and dry Sherry. Typically, sweeter Sherries are consumed with desserts or contrasted with sharper flavors, such as that of blue cheese. On the other hand, dry Sherries are best enjoyed as an apéritif and served slightly chilled. The dryer the Sherry, the cooler the temperature (between 7-10°C for a Fino and 12-14°C for an Oloroso).

Fino: this is the driest of Sherries and is fermented under a layer of flor yeast, which prevents oxidization and gives the Sherry a distinctively fresh flavor. Best enjoyed with salty foods such as olives or almonds, Fino may quickly lose its flavor once opened and so is best consumed straight away. It has a relatively low alcohol content of between 15-17%.

Amontillado: somewhere between Fino and Oloroso, this Sherry is darker in color than Fino and is often created as the result of the layer of flor yeast in a Fino barrel dying and causing oxidization. Another popular apéritif which should be served chilled, it can also stand up to lighter meat dishes such as chicken or rabbit, and has similar alcohol levels to Fino.

Oloroso: this is the most full-bodied of the dry Sherries and has a dark color and nutty overtones, which makes it an ideal match for cured red meats and cuts of game. The most alcoholic of Sherries, it averages between 17-22%. This rich flavor makes it particulary well suited to blending with sweet Sherries to produce ‘Cream.’

Palo Cortado: somewhere between the crisp flavor of Amontillado and the rich aroma of Oloroso, this is another Sherry, which traditionally occurred as a result of an unexpected evolution of the Sherry in the barrel. As such, ‘true’ Palo Cortado is considered something of a rarity as it can only occur by accident, although given its popularity some have taken to artificially producing it through blending.

Already enjoying revived popularity in certain urban hangouts in the likes of London and New York, Sherry may well be set for a come-back just like its cousin ‘Vermouth.’ So next time you’re looking for something a little different to get your taste buds going, why not try on of these superb Spanish drinks.