Everything You Need to Know About Córdoba’s Calahorra Tower 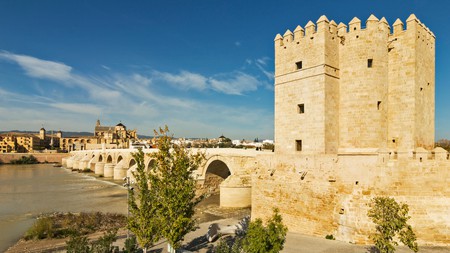 At the southern end of Córdoba’s Roman Bridge is the Torre de la Calahorra (Calahorra Tower), originally constructed as a defence building in the Middle Ages but since used for various other purposes, including a prison and a quarantine centre. Today, this formidable structure houses one of Córdoba’s most informative museums.

Córdoba’s Torre de la Calahorra lies at the southern end of the Puente Romano (Roman Bridge) – the lone architectural landmark in an otherwise unremarkable residential district. It was built in the 12th century by the city’s Moorish occupants to defend it from invaders; originally, the two rectangular towers were connected by an archway, under which the northbound road led over the Río Guadalquivir and into the city centre.

Well-positioned archers’ slits and high battlements enabled Calahorra’s occupants to watch their enemies approaching from miles outside the city, thus making the tower a powerful deterrent to attack. But it didn’t always guarantee victory: in June 1236, a besieged Córdoba eventually fell to King Ferdinand III of Castile.

The Calahorra underwent significant extension and renovation in the late 14th century when Córdoba was under the dominion of King Enrique II (Henry II). He had taken the throne in 1369 after defeating forces led by his half-brother, Pedro I of Castile (nicknamed Peter the Cruel by his enemies, but known as Peter the Just among his supporters), at the Battle of Montiel. Henry sealed a hard-won victory by luring Peter out of Montiel castle, where he’d become trapped after the conflict, and stabbing him to death. Subsequently, the security-conscious monarch added a third, cylindrical tower to connect the Calahorra’s outer two, in order to better defend Córdoba during the numerous rebellions that marked his reign.

Ensuing centuries saw the enlarged Calahorra used for non-defensive purposes. During the 1700s, it housed a prison and, at the close of that century, served as a quarantine centre for victims of a sweeping epidemic. Fast-forward to post-Covid-19, and we can all imagine enduring lockdown within its sturdy walls, looking out from its glassless windows at Córdoba and longing to be outside. In the 19th century, presumably after thorough disinfection, it became a school for girls from the surrounding neighbourhood.

Nowadays, the tower houses one of Córdoba’s most interesting museums, the Museo Vivo de al-Andalus (the Living Museum of al-Andalus, as medieval Moorish Spain was known). Spread over three floors and nine rooms, its permanent collection examines Córdoba’s remarkable pluralism and sophistication from the ninth to the 13th centuries when it was the largest city in Europe. Panels and audiovisual presentations explore the three religions that existed side by side in medieval Córdoba – Judaism, Christianity and Islam – as well as the pioneering work in philosophy, technology and medicine performed by its most prominent figures.

Don’t miss Hall 7, where you’ll find an amazingly detailed model of the city’s Mosque-Cathedral, the real-life version of which is a 10-minute walk away over the Puente Romano. You can also enjoy panoramic views of Córdoba from the rooftop battlements, where, at various times, Moorish and Christian commanders once scoured the land for approaching invaders. Entry to the museum starts at €4.50 (£4.10) for adults and €3 (£2.75) for children.