The Spanish island of Lanzarote has opened an underwater museum, giving snorkelers and scuba divers the opportunity to explore 12 works by renowned sculptor Jason deCaires Taylor inspired by ‘the defense of the ocean’. The Museo Atlántico on the island’s south coast sunk the artworks in order to form a man-made reef on the marina floor.

Already divers have been seen exploring Taylor’s eerie worlds, including Crossing the Rubicon, where a silent crowd gathers around an open doorway, Portal which features an upturned mirror presided over by a solitary figure, and Disconnected, in which a young couple is taking a selfie. Taylor’s creations are both artworks and artificial reefs, created using marine grade cement that is both non-toxic and pH neutral. This means that it is free from harmful pollutants and can eventually become home to coral, fish and crustaceans.

Despite initial scepticism from the local community, Aníbal Vega-Almeida, manager at the Museo Atlántico, explained that most of the public have warmed to the museum. ‘The project has been widely accepted by the islanders, especially the island’s dive centres, who have found a great opportunity at this new site,’ he said. 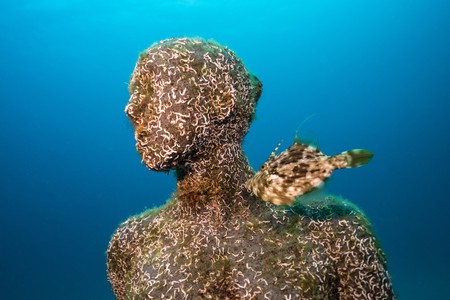 The Centros de Arte, Cultura y Turismo (CACT) is a 50-year old project founded by internationally renowned artist and local resident César Manrique, and the Museo Atlántico belongs to a network of nine centres combining art with nature. Other centres scattered around the island include: Cueva de los Verdes and Jameos del Agua, both of which are centred around volcanic geographical formations; Jardín de Cactus, a cacti garden which houses over 10,000 different plants; and MIAC-Castillo de San José, an old castle converted into a contemporary art museum. 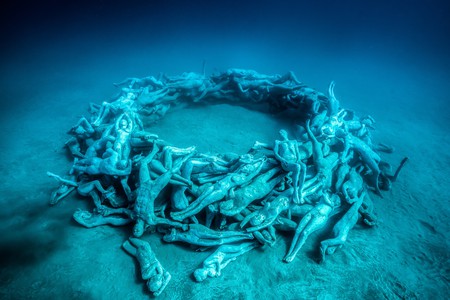 The Human Gyre, Jason deCaires Taylor | Courtesy of CACT Lanzarote
Give us feedback