Erasing the Legacy of Franco in Madrid 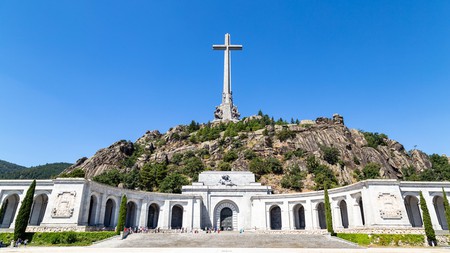 An initiative to replace thousands of memorials to Spain’s late dictator Francisco Franco and his regime is sparking a debate that has been buried for decades.

In 2018, an initiative kick-started by the previous mayor of Madrid, Manuela Carmena, got underway to change 52 Franco-era street names that honoured the regime. Her administration was taken to court for renaming the streets linked to the dictatorship, but she believed Spain needed to confront its past. The street paying respect to José Millán Astray was one of the first to be replaced.

The changes are part of controversial reforms by the ruling Spanish Socialist Workers’ Party (PSOE) to enforce a 2007 Historical Memory Law that called for the removal of all homages to Franco’s rule and the exhumation of more than 1,200 mass graves. President Pedro Sánchez says the move will “help to heal the suffering of the Franco regime’s victims”.

Spain as a whole is split on the legacy of its former dictatorship. Some look back with nostalgia to a perceived era of strong, nationalist leadership. Others, however, want to seize this opportunity to diminish the legacy of their nation’s fascist past.

“I tell you, this decision is the worst of the worst. That Pedro Sánchez is crazy!” exclaims Inmaculada, a resident of Calle San Germán in central Madrid.

Inmaculada has lived all her life on Calle General Yagüe, now Calle San Germán. Its former name paid homage to the Juan Yagüe, a nationalist army officer, nicknamed the Butcher of Badajoz, who masterminded some of the worst atrocities of the war. According to the French newspaper Le Populaire, it was estimated that during the Badajoz massacre in 1936, the number of people executed exceeded 1,500.

“They have spent so much money on something that is history,” says Inmaculada. “Local businesses have had to change all their signs. It doesn’t make sense. Why do people want revenge now?”

Her neighbour, Antonio, 25, agrees that “changing the name has been a real pain. None of my friends know where this street is and taxi drivers can’t find it. I can’t see the point.”

Xianwei Chen, the former owner of Bar Oliva in Madrid, dislikes this erasure of Francoist history. An immigrant from communist China, he sees the General’s fascism as an important part of his adoptive countries identity. “Without General Franco, there would be no Spain as we know it today. He’s the hero of this nation”. The walls of his bar are adorned with fascist memorabilia: posters emblazoned with far-right symbols, Falange party flags and framed prints of the dictator who ruled Spain for almost four decades.

What’s it all about?

From 1936 to 1939, the country was torn apart during a three-year civil war that pitted the Republican left-wing against the Nationalist Falange party under Franco, an ally of Hitler and Mussolini. An estimated 500,000 people were killed during the Civil War in atrocities committed by both sides.

The Nationalists won the war, but the killing of Republicans continued. About 140,000 people disappeared during Franco’s 40-year dictatorship. An estimated 120,000 people remain in unmarked graves around Spain.

Marcial explains that people lived in constant fear under Franco. “When I was younger, if a policeman knocked at the door, you had to go with him. If a boy had long hair, they would take him and knock him to the ground. Why? For fun. That’s Francoism. Now we are free.”

After Franco’s death of natural causes in 1975, right-wing leaders continued to rule under the Amnesty Law, a “pact of forgetting” under which none could be prosecuted for war crimes, and the transition to democracy got underway.

What marks did Franco leave on Spain?

Although the last statue of the dictator was taken down in 2008, there are still hundreds of symbols commemorating the regime around Spain. The Spanish National Statistical Institute (INE) has recorded 1,171 streets and squares named after fascist leaders, but the number of monuments, plaques and shields is unknown.

The 52 street signs replaced since 2007 include Plaza de Arriba España (Hail Spain Square) and Plaza del Caudillo (The Leader Square). Many have been renamed after writers, painters, architects, teachers and key figures in the resistance. More controversially, Paseo de Doctor Vallejo-Nágera – which honoured the pro-Nazi doctor suspected of murdering thousands of babies to purge the Marxist “Red gene” – now refers to his son, the award-winning psychiatrist and author Juan Antonio Vallejo-Nájera.

Other memorials remain in full view. The Victory Arch presides over a busy roundabout in Moncloa, while the Casa de Correos in Madrid’s main square Puerta del Sol was a detention centre where routine torture was carried out.

Meanwhile, 50km (31mi) outside Madrid at El Escorial, a 150ft-tall (46m) cross towers over Franco’s mausoleum at Valle de los Caídos. In October 2019, Franco’s remains were moved to a private cemetery, but more than 33,000 people, many unidentified Republican prisoners of war who died while building the mausoleum, are still interred here, in Spain’s largest burial site.

Why do some people support the erasure movement?

A growing movement wants to break with the past. In 2010, a landmark lawsuit was brought by an Argentine judge to seek justice for crimes against humanity under international law that evades the Amnesty Law. More than 200 people have testified in many cases concerning suspected stolen babies, torture and murder. “It is unacceptable for Spain to continue to be the second country after Cambodia with the largest number of missing people,” announced justice minister Dolores Delgado in 2018.

“I agree with that law to replace all the names of the streets,” says Marcial. “You have to kill Franco and Franco is dead. Nowadays, people don’t know the names of the generals and they don’t care.”

Marta, whose great-grandfather was among those who disappeared, sees changing Francoist road names as a vital step towards a future free of fascism. “By keeping the Francoist street names, it shows that it’s still somehow in our soul. We haven’t put that past behind us, we haven’t previously had parties in power with the balls to change this.”

Why are some people opposed to the reforms?

Right-wing extremism is rising rapidly in Spain – in the 2019 general election, the far-right Vox party gained 52 seats in parliament – and the number of people wanting to put a stop to the erasure movement is also growing.

For Chen in Bar Oliva, removing all tangible signs of the dictatorship won’t shake his belief in his hero. “This is political. If the PSOE thought that moving his remains would change anything, no… Franco’s footprint is in all parts of Spain. He lives in the heart of the pueblo.”

The Fundación Nacional Francisco Franco, which promotes a positive interpretation of Franco, called the renaming policy an act of “revenge”. The current mayor of Madrid, José Luis Martínez-Almeida of the right-wing People’s Party (PP), responded by saying the local government will do “as the courts say”. However, Madrid City Council went on to remove plaques commemorating Republicans killed by Francoist forces that formed part of a memorial approved under Manuela Carmena.

How can Spain move on?

Attempts to quietly erase the past can inadvertently highlight current social divisions. Francisco Ferrándiz, a sociologist at CSIC (Spanish National Research Council), believe’s the movement towards monument erasure is a vital tool to “politically and emotionally unlearn fascism”. Yet he also warns the continued existence of those sites currently serves as “testimony to the endurance and political depth of Francoism’s terror machinery”.

In such a polarised society, is reconciliation possible? Roberto, whose father lived in a village where people were summarily executed during the dictatorship, suggests: “The Amnesty Law was meant to be a pact of forgiveness. People don’t like to talk about it, but someone needs to explain to people that it’s not normal to have a dictator buried in a public place and memorialised throughout the country. Then maybe things will start to change.”

Franco may be dead but the social issues live on. The recent reforms are clear signs of positive change and the start of a process towards reconciliation. Rather than erasing the past altogether, explaining it – such as through historical memory museums and the testimonies of victims – will help people to move on from one of the most horrific periods in Spanish history.