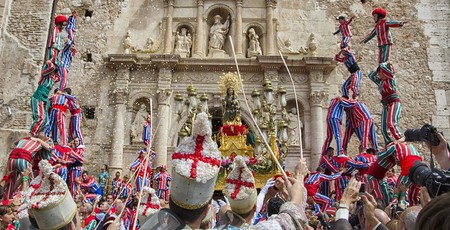 Las Fiestas de Nuestra Señora de la Salud is a festivity celebrated at the beginning of September in the village of Algemesi, a small town situated 35 kilometers from the city of Valencia. Find out how during the celebration of its three big parades Algemesi fills up with one of the most beautiful representations of Valencian culture and traditions.

According to legend, the image of the Mare de Déu de la Salut (Virgin Mary of Good Health) was found near the trunk of a mulberry tree in 1247 by a neighbor of Algemesi. After this discovery, the image was sent to the nearby city of Alzira to worship it there in a church. But, even if they kept it in Alzira, the image appeared again near the same mulberry tree. After trying to relocate it up to three times, in the end, it was decided to build a sanctuary and keep her in Algemesi.

So, the celebration of this festivity serves to commemorate this discovery and, at the same time, to venerate the Virgin. The first reference to the festival is in a document dating back to 1610; at that time it was a festivity held by the neighbors of the Berca Street — the street where the chapel is located. The celebration extended in 1680 and since then it is a local festivity with people from the entire village participating in it. 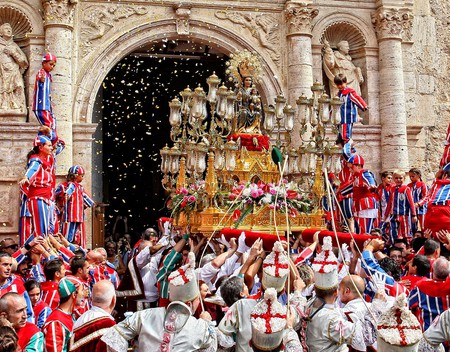 The festivity is divided in several celebrations that take place from the Aug. 29to Sept. 8. Even if it goes for many days, the big dates are Sept. 7-8, when the three most important parades are celebrated.

The ‘Procession of Promises’ takes place at night on Sept. 7. It starts at 10 p.m. and during the course of this parade the image of the Virgin is carried from the Basilica (the main church in the town) to the sanctuary, erected in the place where the image was found.

The ‘Parade of the Morning’ is celebrated, as its name indicates, in the morning on Sept. 8, at 10 a.m. It is the shortest of the three celebrations, but also the most intense. With this parade, the Virgin is taken back to the Basilica, but following a shorter way; all the houses along the itinerary decorate their balconies and there are colorful displays all around the city.

That evening, there is the ‘Volta General,’ the longest of the parades. It starts at 7:30 p.m. and it lasts for more than seven hours, until past 2 a.m. The Virgin goes across the town center and people wait in front of their houses to give an offering to the courtship in exchange of a dance. When the Virgin arrives again to the Basilica, this is the end of the parade and thus, the conclusion of the festivities. 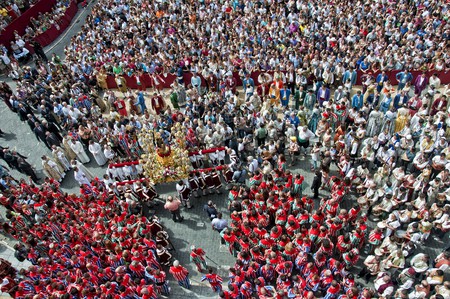 Of course, this is a religious celebration and the representations of the mysteries and the martyrdoms are leading the parades; different iconic Christian characters that show with fervent religiosity some of the most prominent passages from the Bible. But these parades are not just beautiful and heartfelt religious events, they are also important from an ethnological point of view, representing so many old Valencian traditions. This festivity is important for its folkloric elements and more than anything because it has served to preserve different traditions from the area.

These are not ordinary processions, because together with the Virgin and its carriers, several traditional characters go along as well. Thus, following the mysteries and the martyrdoms, there come the different groups of dancers which are the core of the festivity.

La Muixeranga leads the group, which is the most popular outside Algemesi. These dancers, dressed in their blue-and-red or green-and-red costumes, are famous for the human towers they make. As they advance together with the parade, they come together to build various human towers at different points in the itinerary. 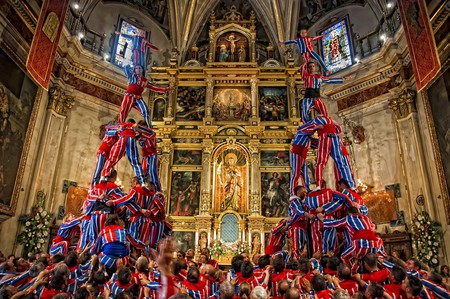 After them, goes the Bastonets, a group of dancers that represent a typical battle dance. Following the rhythm of the tabalet and the dolçaina (the typical instruments from Valencia), they perform their traditional dance, fighting in a harmonious rhythm with their small sticks (bastonets).

The next one is la Carxofa, a traditional Valencian dance which is performed around a big stick with an artichoke (carxofa in the Valencian dialect) on the top. The stick is placed in the middle and with the help of different ribbons the dancers move around it.

Following the Carxofa, come els Arquets, a group of dancers that dance to the beat of the dolçaina and tabalet, holding small arches with bells (the arquets) that they use to follow the beat.

Les Pastoretes are the next dancers to come. The dances, performed by children, serve as an initiation process and give the opportunity to the youngest ones to participate in the celebration. 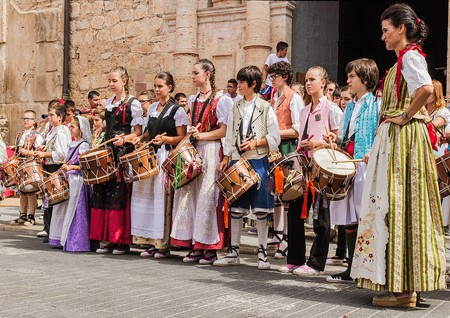 Les Llauradores, the most modern dance in the parade, which started in 1906, comes after. This dance is not performed with the music of the dolçaina and tabalet, but with different wind instruments. Men and women perform this dance, dressed in the traditional Valencian costumes, and while dancing in pairs, they play the castanets.

The Gegants (the giants), a group that has been restored quite recently, goes after the Llauradores, but just in the ‘Morning Parade’. These dancers are two giant figures representing King James I (the conqueror of the Valencian territories) and his wife Na Violant D’Hongria. The carriers inside them make the figures dance to the rhythm of the music, entertaining both the young and the adults.

Finally, els Tornejants, is the last group of dancers, and one of the most important and venerated; they are called the knights of the Virgin, as they go between the Mayor Cross and the image of the Virgin. This group also performs a battle dance and with their traditional costumes, similar to a soldier’s uniform, they perform together an elaborated traditional choreography to the music of kettledrums.

Altogether, these groups of dancers create a colorful and joyful ambience; an atmosphere in which the locals and visitors enjoy a unique show, filled with history, music and rhythm. 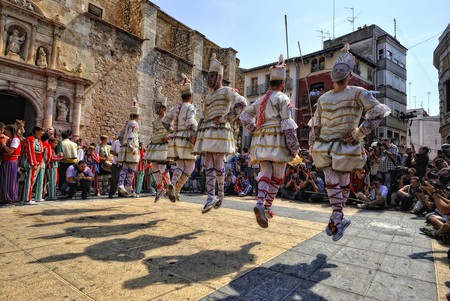 The Fiestas de Nuestra Señora de la Salut is an impressive festival in which locals and visitors enjoy dances and traditions from the Valencian people. The importance of the festivity in Algemesi lies in the way in which it still preserves the local traditions and keeps alive the particularities and the uniqueness of the old Valencian spirit. As UNESCO also points out: “An understanding of the intangible cultural heritage of different communities helps with intercultural dialogue, and encourages mutual respect for other ways of life.” 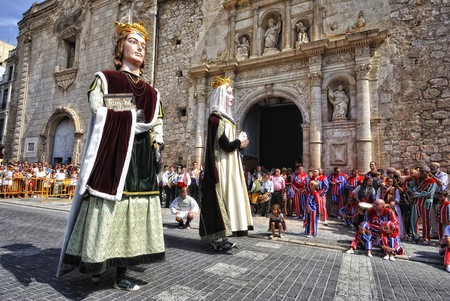