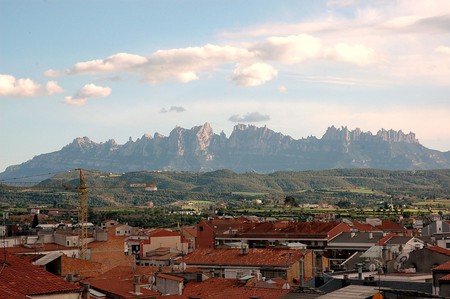 Located just an hour away from Barcelona by train, Montserrat is one the most stunning sites of natural beauty in the province of Catalonia. Formed some 45 million years ago, its unusual shape and aspect are the result of mass movements of land and water that defined the local landscape. Find out how to plan your day trip to make the most of your time visiting this famous Catalan landmark.

A Brief History of Montserrat

This incredible rock formation is famous for its many jagged peaks, which inspired its name: Mont Serrat means ‘serrated mountain’ in Catalan. It owes its astounding appearance to events that unfolded some 45 million years ago, back when most of the area was submerged underwater and formed part of a large delta that poured into the sea. 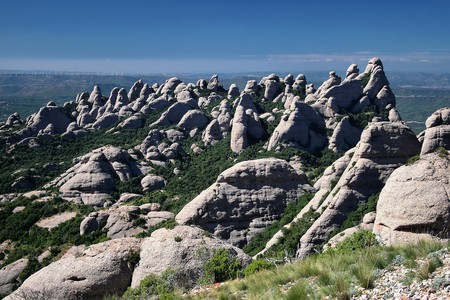 The rivers that formed the delta carried large rocks and pebbles that gathered in the delta itself, as did limestone as a result of decaying organic material. Then, some 25 million years ago, there was a shift in the earth’s plates resulting in the sea being pushed further out and the area around Montserrat being pushed upwards.

As a result, the land was exposed to air, leaving the formation of rocks and limestone to suffer the effects of the weather. Over the course of the next few million years, the rainwater and wind carved shapes into the limestone, which was relatively soft compared to the stone, producing the incredible system of curves and peaks that is Montserrat today.

What To See and Do

Given its impressive appearance and close proximity to the Catalan capital, Montserrat is a perfect day trip for those looking to enjoy the great outdoors. There are a number of clearly indicated hikes to enjoy on Montserrat, ranging from just one hour to over three hours. These picturesque walks are a great way to familiarize yourself with the mountain’s diverse flora and fauna, which includes wild boars, wild goats, and other wild mammals. 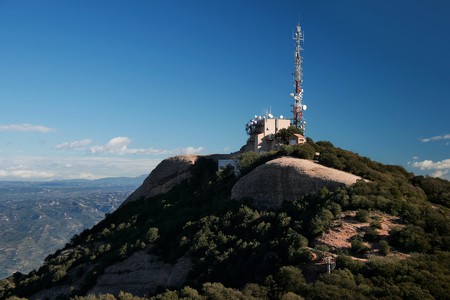 The summit of Montserrat | © Jorge Franganillo

For the more adventurous, a hike to the top of the highest peak of Montserrat is a worthy challenge. Known as Sant Jeroni (Saint Jerome), the peak stands at some 1,236 meters high and can be accessed by one of the marked trails. Interestingly, there used to be a funicular that would carry passengers to the top of the peak, however it was closed in the 1980s when it became all too apparent that the high altitude and resulting wind made it a dangerous ride.

Aside from the rock formation itself, one of the most famous sites of Montserrat is the old Benedictine Monastery that sits atop it and is home to some 80 monks. The monastery includes a basilica as well as a famous statue of the Virgin Mary, locally known as ‘La Moreneta‘ – the ‘Dark One’ – owing to her dark complexion. These religious sites are open to the public most days of the week, and there are tours organized regularly. 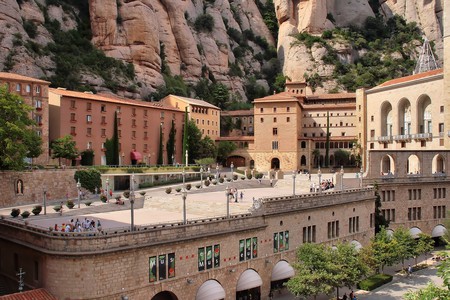 There is a large self-service restaurant and two upper-market restaurants at the middle-station at Montserrat, on the same level as the Monastery and the funicular station. There is also a museum attached to the monastery where you can admire both turn-of-the-century and modern artwork.

Part of the Catalan pre-coastal range, Montserrat is located some 60 kilometers inland and to the north of the provincial capital, Barcelona. It is surrounded by a number of small towns and villages where you can find a range of hotels and hostels to suit any budget, and it can be accessed by car as well as by train. From the base of the mountain you can access the top via either a funicular railway – the Funicular de Sant Joan – or a cable-car – the Aeri de Montserrat.