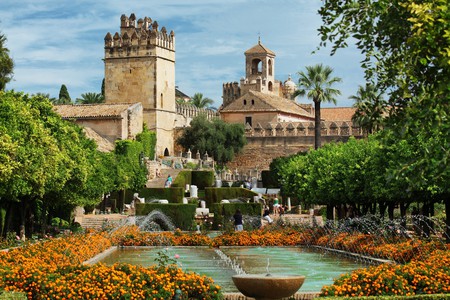 The beautiful and inspirational town of Córdoba | © Pixels4Free / Pixabay

Poetry in Córdoba, Spain, was, for a long time, consigned to the ghosts of its past eras—poets who, from Roman rule to the time of Al-Andalus, left behind vast archives of beautiful poetry. Though the art of word-weaving has become less popular, an artistic underground is developing discreetly in Córdoba by poets who are gradually bringing poetry back to its former glory.

‘Cosmopoética: Poetas del Mundo en Córdoba’ (‘Poets of the World in Córdoba’) is an annual celebration of international word-smithery that’s bringing the art form to the attention of people who might not otherwise seek poetry out. Indeed, the slogan on the 2016 edition’s posters read ‘nadie escapa de la poesía’ (‘nobody escapes from poetry’). Formerly staged during the springtime, it is now held during the last week of September in order to spread out cultural events throughout the year rather than schedule them all into the same season.

If you happen to be visiting Córdoba during another month and are unable to catch Cosmopoética, you can check out a comprehensive list of the city’s arts and literary celebrations held throughout the year, many of which focus on a poetic element. For example, the Enmujecer Festival (‘Becoming Woman Festival’), held every March, stages impassioned feminist-rooted poetry recitals before thousands of supporters. Sculptures of poets who lived through the glory days of the Córdoba Caliphate, such as Princess Wallada, can be found nestled in the city’s leafy streets, adorned with lines from their work. 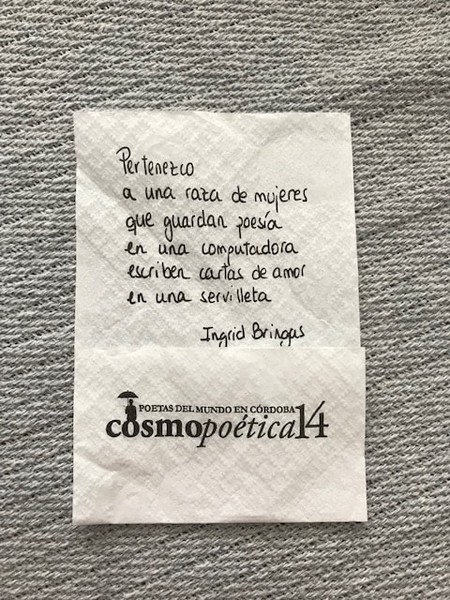 Poetry on a napkin that reads: “I belong to a breed of women who keep poetry on a computer and write love letters on a napkin” | © Laura Ferries / Culture Trip

There is also a perfect combination of wine and books waiting for you at La República de las Letras (‘The Republic of Letters’) in Plaza Chirinos, where poets from all over Spain come to regale small, intimate audiences with the spoken word over a good glass of Rioja. At any point during the year, the undercurrent of poetry can be felt in Córdoba if you seek it out.

Though Cosmopoética is not a new event, it has only recently become much more integrated in Córdoba’s annual calendar of events. One of the festival’s founders, Raúl Alonso, spoke to Culture Trip about when, how, and why Cosmopoética was established and said that “Cosmopoética was an initiative of the office responsible for Córdoba’s Capital of Culture bid back in 2002. It sought to include not only poets but artists and designers, too.” Each year, the committee chooses a new theme, such as the one that focused on Mexican poets in 2017.

The objectives of Córdoba’s Cultural Delegation are to enrich the city’s day-to-day culture, preserve its history, and initiate new artistic pursuits by teasing out talent from the city’s inhabitants. Each year, during the week-long festival, there is an impressive host of events ranging from public poetry readings to guided literary walks, workshops for children, seminars, jam sessions, and much more. All of these events are typically held at the Palacio de Orive, Parque Cruz Conde, and the Biblioteca Central, along with a selection of Córdoba’s edgier, alternative bars such as Bar Limbo, Clandestino, and Automático. What could normally be a regular Friday night at a bar could turn into a poetry immersion. 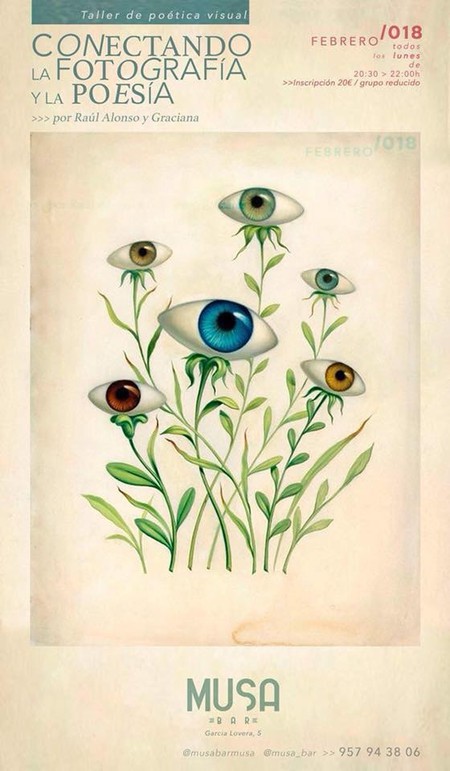 During the city’s poetry festivals, these bars like to participate by replacing their usual plain white napkins with ones that feature the beguiling words of poets from all over the world—a unique touch that helps poetry find its way into the everyday.

Though poetry festivals are not a novel idea, the beauty of Cosmopoética is that it has filled a void where there is otherwise an abundance of culture. The celebration lights up the small city of just over 300,000 inhabitants, inspiring a new love and celebration for the art of the written and spoken word. The venues are varied and allow visitors to not only enjoy the events themselves but to absorb the atmosphere in settings such as palace gardens, bookshops with wine bars, and food markets (Mercado Victoria).

Keen to foster a new wave of poetic talent and interest, Raúl has joined forces with publicist Graciana González to set up a new initiative called Taller de Poética Visual (‘Visual Poetry Workshop’) hosted by the trendy, yet cozy, Bar MUSA on Calle García Lovera. The workshop unites poetry with photography and focuses on concepts such as desire, contradiction, and separation. “Our objectives are to create a space for meeting like-minded artistic people, [along with] communication and idea sharing, and an interchange of creative energies. We want image and poetry to come together, to be amplified and bring it closer to the people.” 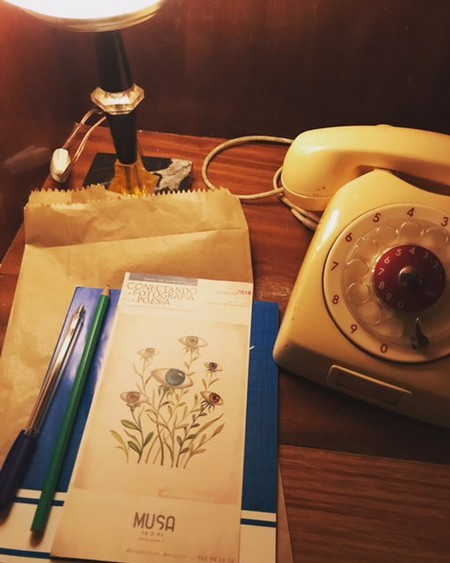 The poetry movement in Córdoba is making steady headway, which is fitting in a city that, on its own, is pure poetry to behold and breathe in. Córdoba is finally having its poetic core restored after many bygone centuries.