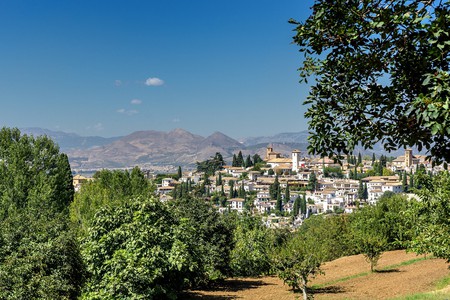 The wild landscapes, passionate people and romantic cities of Andalusia have inspired writers for centuries. Here, Culture Trip takes you on a literature-orientated tour of this beautiful part of Spain, looking at its notable writers, some fascinating books set in the region, best bookshops and most intriguing literary landmarks. Read on for the definitive literary guide to Andalusia.

Like many artists that posterity judges as great only after they’ve checked out, Seville-born poet Gustavo Bécquer was largely unappreciated during his lifetime. Nowadays, though, he is one of the most widely read Spanish authors after Cervantes. Bécquer moved to Madrid at the age of 17 in search of literary success and recognition, but neither came easy, so the dreamy poet worked as a journalist and comic playwright to pay the bills. Today, Seville’s best-known writer is celebrated for his Rimas y Leyendas (Rhymes and Legends), the brief stanzas of which were memorised by his friends and only published in written form after tuberculosis carried Bécquer off at the age of 34. ‘Rhyme number 21’ has become one of the most well-known poems in the Spanish language. 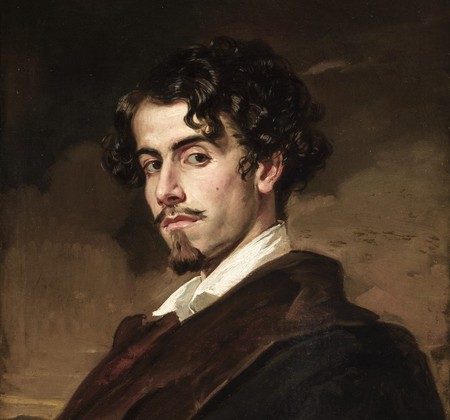 Winner of the Nobel Prize for Literature in 1977, Sevillano poet Vicente Aleixandre was a member of the so-called Generation of ’27, a group of writers who produced some of the most important works of Spanish literature. Aleixandre was a pioneer of poetic surrealism and free verse, both of which are given full artistic rein in two of his most famous works, Swords Like Lips (1932) and Destruction or Love (1935). The latter book – which won Spain’s National Prize for Literature – explores man’s relationship with the cosmos, a theme that the writer turned to often. Aleixandre was opposed to the the Franco dictatorship that followed Spain’s 1936–39 Civil War, and his work was banned throughout the country between 1936 and 1944.

Probably the most famous Spanish writer outside of Spain, Granada-born Federico Garcia Lorca drew his first artistic inspiration from music, particularly the emotionally-charged works of Chopin and Beethoven. As a leading member of Generation of ’27 he became one of Spain’s greatest romantic poets, taking inspiration from the flamenco– and bullfighting-saturated culture of his beloved Andalusia. Lorca was murdered somewhere in or near Granada at the beginning of the Spanish Civil War in 1936, but his exact burial site is still yet to be found. 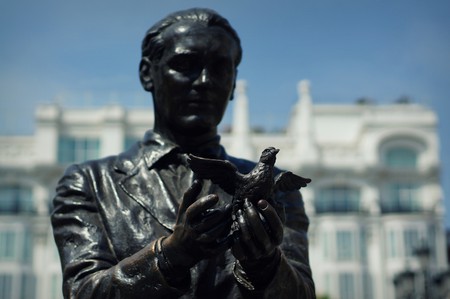 Salvador Compán was born in the beautiful town of Ubeda in Jaen and now lives in Seville; both places have had a deep impact on his work. His most recent novel, 2017’s El Hoy Es Malo, Pero El Mañana Es Mio (Today Is Bad But Tomorrow Is Mine), is set in a small town in Jaen and explores the passionate lives led under its sleepy surface.

Franco’s Spain was no place for Communist writers, so Cadiz-born poet Rafael Alberti lived in Argentina and Italy after the Spanish Civil War ended in 1939. He didn’t return to his homeland until 1977, two years after the Generalisimo’s death finally ended a grim 40-year dictatorship. Alberti’s first volume of poetry – 1925’s “Sailor on Land” – was inspired by the beautiful coast of his native Cadiz, but from the mid-1930s, Spain’s divisive political convulsions became his chief subject matter. In 1935’s ‘13 Bandas y 48 Estrellas’ (‘13 Flags and 48 Stars’), for example, we read a poeticised critique of capitalism, whilst ‘Capital de la Gloria’ (‘Capital of Glory’) pays homage to the two-year siege of Madrid. Alberti was awarded the honour of Hijo Predilecto de Andalucia (Favourite Son of Andalusia) in 1983. 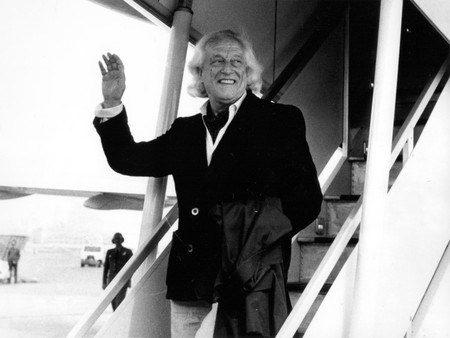 The collection of poetry with which Federico Garcia Lorca arrived on the international literary scene, Romancero Gitano (Gypsy Ballads) is an incomparable exploration of the Romani culture of Andalusia and uses motifs such as the moon, the sky, night, death and rivers to express Andalusia’s invisible but vital essence. One of the most famous ballads is ‘The Moon, The Moon’, in which the moon appears as a seductive, malevolent character who tries to kidnap a young boy from a gypsy forge. These dream-like poems were an instant success and launched Lorca’s literary career, and they remain his most popular works, saturated in the romance, drama and passion of the poet’s beloved Andalusia.

Salvador Compán’s Cuaderno de Viaje (Travel Notebook) is set in and around Ubeda, the beautiful whitewashed town in Jaen where the author was born. Populated by dark, violent characters and set against the wild backdrop of Jaen’s Cazorla mountain range, the novel presents Compán’s hometown as a representative of ‘civilisation and reason’, a city where ‘everything is secure and fixed in place’, as the author once put it. Compán has said that Jaén and Ubeda represent an Andalusia that ‘isn’t in the feria posters’ (a land of dancing, joy and bullfighting), in contrast to the fragile beauty of romantic and joyful Seville, a city in which ‘everything seems light and portable’. Worth reading for the descriptions of Jaen’s untamed landscape alone, the novel is a stirring exploration of the different aspects of the region. 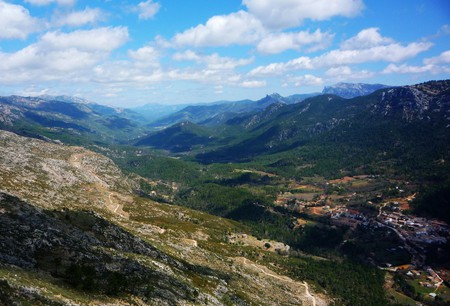 English poet and Hispanophile Laurie Lee penned this homage to Andalusia after he returned for a tour of Granada, Seville, Algeciras, Almuñecar and Écija in the early 1950s with his wife, Kati. Fifteen years earlier, Lee had been living in the quaint fishing village of Almuñecar (which he called Castillo in the book for ‘political reasons’) after trekking the length of Spain with nothing but his violin – an epic journey recorded in As I Walked Out One Midsummer’s Morning – but was forced back to England when the Spanish Civil War started in the summer of 1936. Although his heavily romanticised prose can be a little much at times, Lee’s writing shows a deep love and understanding of this part of Spain and the book is a must-read for anyone visiting these five fascinating cities today.

Englishman Gerald Brenan arrived in Spain in 1919 after being demobbed from the British Army, wanting somewhere secluded and cheap where he could read to compensate for a missed education, he ended up in the Alpujarra, an other-worldly cluster of snowdrop-like villages clinging to the southern slopes of the Sierra Nevada. Brenan settled in the tiny dwelling of Yegen, and South from Granada is his account of the seven years he spent living there and a valuable record of mid-20th century life in one of the wildest and most beautiful parts of Andalusia. A witty and incisive chronicler, Brenan writes of the self-sufficient, closely bound community into which he was welcomed with detail and affection. 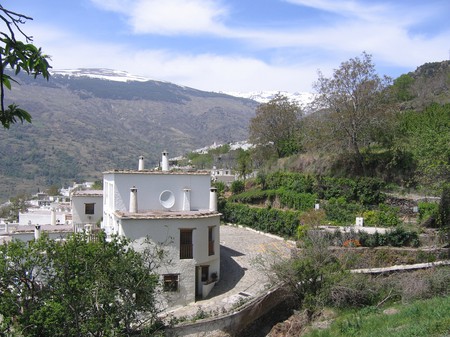 When the editors of French periodical La Presse dispatched one of France’s most celebrated writers to Spain in 1840, they must have known how special the resulting travelogue would be. Théophile Gautier travelled from Paris down through Spain in a mule-drawn coach, writing colourful reports on Spanish life that were published together as A Romantic in Spain in 1845. He instantly fell in love with Andalusia, particularly with the mysterious old neighbourhoods of Cordoba and Seville, the beautiful gypsy women and their costumes and the wild, bandit-populated countryside. Gautier, who had established himself as a leading figure in literary romanticism by 1845, is a delightful travelling companion, and his book still provides a rich source of insight for visitors to southern Spain.

The Little Bookworm is appropriately situated on the lively, bohemian Calle Feria and is said by Sevillano bookworms to be one of the few serious bookshops left in the city. This is a place for readers who like their books in physical form rather than downloaded from clouds or onto devices claimed to be ‘just like’ actual books. A comprehensive range of stock spanning all genres is presided over by an owner praised for her passion for books and her attentiveness. International newspapers and magazines are also available on Sundays. 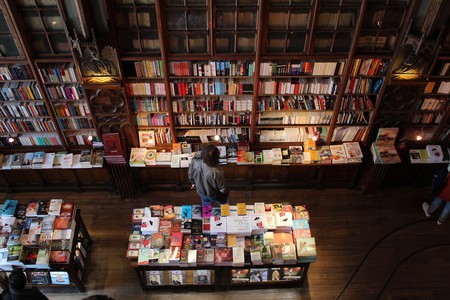 The cleverly named Laextra Vagante (get it?) is where to get something unlikely to be found on the bestseller-lined shelves of FNAC (Spain’s answer to Waterstones). Friendly assistants are on hand to help in your search, likely to lead to some literary treasure – magazine, limited edition, out-of-print gem you’ve been hunting for years – that you simply must have. In addition to its wide-ranging stock, Vagante functions as a cultural space and hosts book club meetings and other literary events, making it a great place to discover new Andalusian writers.

Ever since it opened its doors in 1981, Rayuela has been regarded amongst Malagueño book-lovers as one of the city’s best independent bookstores. The staff don’t rely on computers for their insight, and customers are assisted by people who share a love of literature. Located in the heart of La Merced, Malaga’s coolest neighbourhood, it specialises in linguistics (the genre has over 200,000 titles on its database) and humanities, particularly psychology. 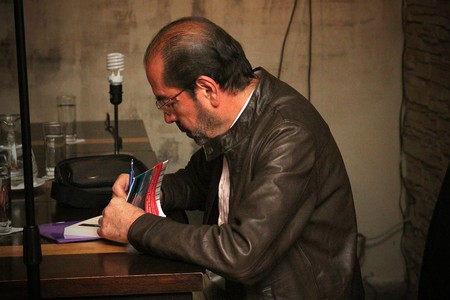 Tucked away in the maze of old residential streets that extend westwards from Granada’s mighty cathedral (yet unfinished), Bakaki is a bookstore from another age. It houses a bewildering array of new and secondhand fiction and non-fiction, as well as dusty old leather tomes and out-of-print treasures unlikely to be found anywhere else. Readings and literary political debates are also frequently held in its delightfully-chaotic interior. Forget Amazon’s recommendations – this is a shop for those who like a literary treasure hunt to precede every new book they buy.

As is advertised by its name, Republic of Letters runs a busy and varied programme of book-related events as well, as offering one of the best selections of literary fiction in Cordoba. La Republica, like all the best bookstores in the city, is not just a place to browse for a new read but also a cultural space in which to meet other book-lovers and exchange ideas and recommendations. Even better, customers can a glass of one of the excellent in-house wines, thus combining two of life’s greatest pleasures in one cosy space. 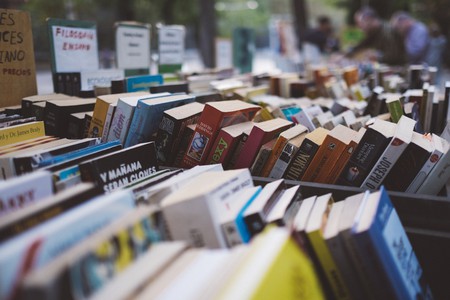 The elegant Andalusian townhouse in which Granada’s most famous son was born in 1898 now houses a revealing collection of documents, sketches and photographs relating to the poet’s life. The pretty park in which the house stands also bears Lorca’s name and is the perfect place to take a volume of his poetry and spend an afternoon reading.

Monument to Laurie Lee in Almuñecar

To memorialise the relationship between Almuñecar and writer Laurie Lee, a small monument was unveiled on the town’s seafront in 1988. It sits unassumingly under a palm tree at the end of a row of trendy beach bars and is easy to miss, even though it would be ‘indelicate’ to specify what it resembles, as Lee quipped when he was shown a photo of it. 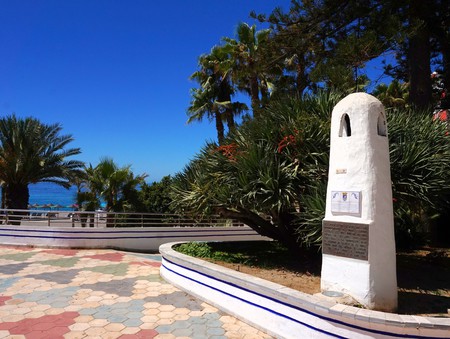 Villages of the Alpujarra

Approximately an hour’s drive south of Granada, this rustic cluster of whitewashed little villages is spread across the southerly slopes of the Sierra Nevada. Beneath the peaks of Veleta and Mulhacén – mainland Spain’s two highest peaks – the vast, untamed landscape of this region (made famous to the English-speaking world by Gerald Brenan in South from Granada) is truly humbling.

Though it had a starring role in Washington Irving’s Tales of the Alhambra (1832), southern Spain’s greatest monument appears in countless books set in or about about Andalusia – and for good reason: sitting high atop Granada’s lush Darro Valley, this 1,000-year-old Moorish fortress represents all the mystery, aesthetic splendour and romance of Al Andaluz, as Arabian-ruled Spain was called. 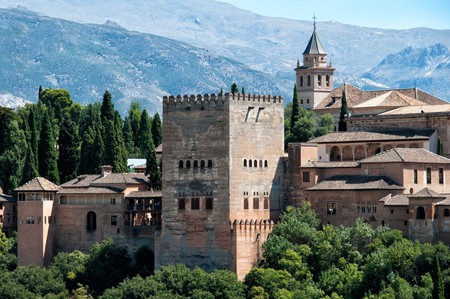 The Alhambra, one of Andalusia's great literary landmarks; ddouk, pixabay

The Old Quarters of Seville and Cordoba

The neighbourhoods of Santa Cruz in Seville and San Basilio in Cordoba enchanted Gautier when he visited in 1840, and it’s not hard to see why: winding cobbled lanes leading into mysterious, romantic squares; strains of flamenco drifting from open windows; jasmine, geraniums and orange trees hanging from scruffy old walls and lining the narrow streets – these are truly artists’ barrios. Plus, Gustavo Bécquer’s childhood home still stands in the idyllic destination.