Cook Like A Catalan! Discover Cooking Classes In Barcelona

What better way to get to know the culture of a country than through its gastronomy? Barcelona has a wide range of culinary experiences on offer for visitors, from tapas walking tours and food and wine excursions to the latest craze of cooking classes. 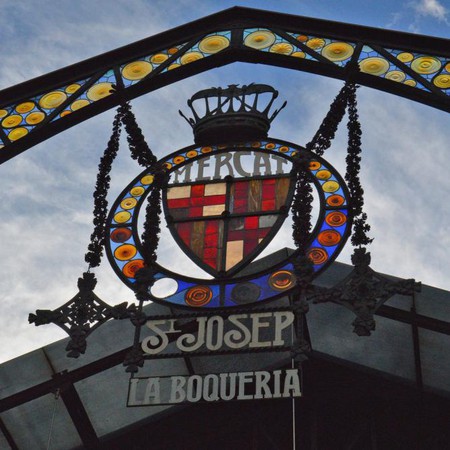 ‘Through a cooking class, you can uncover the culture and idiosyncrasies of a vibrant city like Barcelona. And with all the cooking shows on TV these days, everyone is looking to discover her or his inner chef,’ says Emma Valcárcel, co-founder of one of Barcelona’s most popular cooking schools, Barcelona Cooking. A cooking class is not only an effective way of getting to know a city’s culinary culture, it is also a sustainable form of tourism that is more participative and interactive, and less consumerist than traditional tourist activities.

Spain, meanwhile, has a well-deserved reputation for its exciting, creative culinary traditions. Spanish cuisine draws on a wide variety of influences, from its European neighbors in the north, Moorish heritage in the south and, thanks to its early explorers, an abundance of fine ingredients brought from the Americas and the Far East.

With its cutting-edge, internationally acclaimed cuisine, Barcelona is Spain’s gastronomic heartland. In the 2015 edition of the Michelin Guide, 23 Barcelona restaurants were awarded either one or two stars by the guide’s illustrious reviewers, allowing the Catalan capital to maintain its standing as the most star-studded city in Spain.

So what better place to learn to cook delicious Spanish dishes such as gazpacho, Spanish tortilla and paella than Barcelona? Aside from its rich culinary heritage and excellent chefs, Barcelona is also home to the Mercat de Sant Josep de la Boqueria, more commonly known as La Boqueria, one of the largest and most renowned public food markets in Europe and a must-see for any visitor to Barcelona. Every day, the stalls in La Boqueria are filled with the highest quality fresh, seasonal produce – a dream come true for any cooking enthusiast.

Barcelona Cooking is one of several cooking schools located just a stone’s throw away from La Boqueria. Every morning, its students start the day with a shopping trip to the market, expertly guided by one of the school’s three chefs. Walking through the market in the morning, they are given a unique, first-hand opportunity to take in the colors, flavors and smells in one of Europe’s largest food markets. 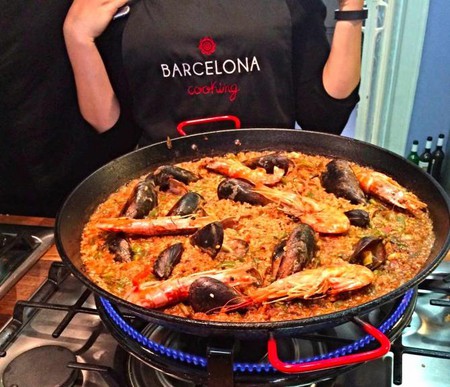 Emma Valcárcel set up Barcelona Cooking in 2012 together with her two partners, Tony Martínez and Cándido Cid, a qualified chef from Barcelona’s renowned Hoffman Academy. ‘When we opened the school, we wanted it to become a reference on the city’s gastronomic scene and, based on the feedback we receive, we believe we’ve achieved just that. We’d like every visitor to the city to get to feel like a Spanish chef for a day,’ says Valcárcel.

After the trip to La Boqueria, the time has come to start cooking. The instructions from Cándido Cid and the other chefs are easy to follow, giving the eager students as much autonomy as possible, while still ensuring a successful result. Lotta Roxell is a professional chef from Stockholm, Sweden. She has signed up for the class with her friend and ex-colleague, who is also a former chef. ‘We came here because we enjoy cooking together, and to get some new inspiration’ says Lotta. Doug McMillan, an engineer from Wellington, New Zealand, admits he likes to cook in his spare time. He is attending the class with his girlfriend, Catherine McKaskell. ‘I love cooking and I love good food,’ he says. ‘I enjoy cooking risotto, but I’d never tried a paella before and really wanted to learn so I could make it at home.’ 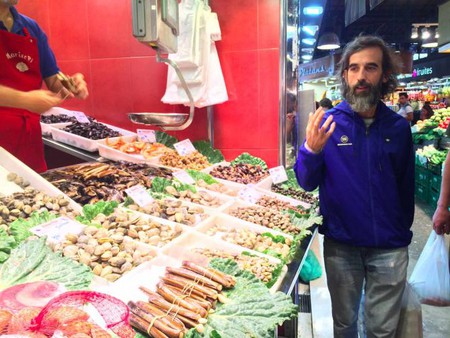 ‘All sorts of people attend these classes,’ says Emma Valcárcel. ‘Most of them are foodies who want to learn more about the richness of Spanish and Catalan gastronomy. We have participants of all levels, from the very skilled to those who’ve never fried an egg before. We can adapt the classes to anyone.’

Just over two hours later, and after an intensive session of cutting, dicing, slicing, chopping, whisking, stirring, grating, leveling, pouring, frying and blending, a veritable feast is laid out on the table. ‘Today, we’ve prepared gazpacho, tortilla de patatas, pan con tomate, seafood paella, vegetarian paella and crema catalana,’ says Cándido Cid. ‘We have different menus for different classes and all our menus are adapted according to the season.’

Isabelle Kliger is a Barcelona-based freelance journalist whose interests include travel, good food, football and gin. She is a regular contributor to The Culture Trip, Travel + Leisure and the Scandinavian Airlines in-flight magazine. Follow Isabelle’s adventures on Instagram @ikliger.