César Manrique: The Balance Between Architecture, Art And Nature 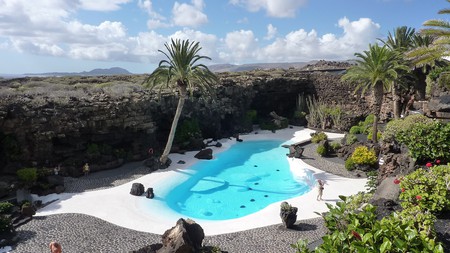 César Manrique Cabrera (1919–1992) was a painter, sculptor, architect and an artist originally from the island of Lanzarote (The Canary Islands, Spain). He attempted to combine his work with the defense of the environmental values of the archipelago of The Canary Islands. ‘For me, Lanzarote was the most beautiful place in the world. That’s why I decided to show Lanzarote’s beauty to all of them’, he dedicated to Lanzarote, the place where he grew up. Nowadays, it’s impossible to imagine Lanzarote and its uniqueness without the work and efforts of César Manrique.

After concluding his art studies in Madrid (where he lived almost 20 years), César Manrique exhibited his paintings and some murals at home as well as abroad. At Guacimetas’ airport, a simple but unique mural welcomes everyone who arrives to Lanzarote. César Manrique went in depth into non-figurative art while developing his paintings, and in the 1950s founded Fernando Fé Gallery, the first non-figurative art gallery in Spain. In 1964, César Manrique moved to New York , where his work was exhibited three times at Catherine Viviano Gallery.

While living in New York, he concluded ‘People in New York are like rats. Humans were not created for all this artificiality. There is a necessity of coming back to Earth. Feeling it, smelling it. That’s what I feel. I miss the purity of the nature‘. Observing directly from non-figurative expressionism, pop art, kinetic art and sculpture, his visual culture acquires a further creative dimension which was used in his subsequent works. In addition, César Manrique had seared in his soul the image of the large beach of Famara with its smooth and clean sand and huge cliffs which were reflected in the sea. 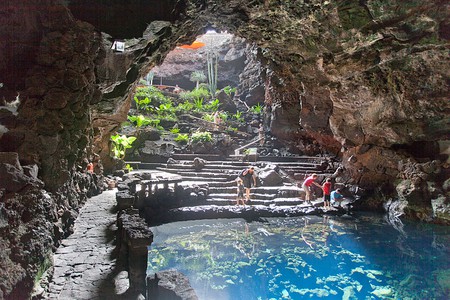 The beauty of nature made Manrique return to Lanzarote in 1966 when the island was starting to develop a favorable growth in terms of tourism. His intervention at that moment was crucial and decisive due to the proposal for codes of sustainability which safeguarded the natural heritage on the island. This brave act of protecting the nature of Lanzarote helped the island gain the title of Biosphere Reserve by UNESCO in 1993, one year after Manrique’s death. 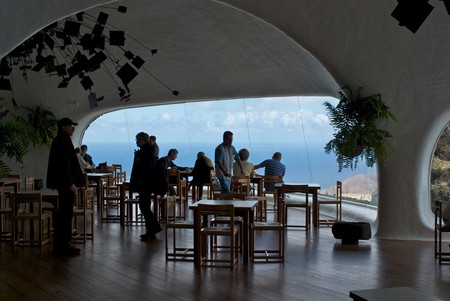 Besides searching for sustainability, César Manrique elaborated a creative work based on an aesthetic ideology which was denominated as art in nature. He summed up this aesthetic way of processing art in his landscapist works in Jameos del Agua, an exceptional cave serving as a home for pale pigmentation and blind grabs. El Taro de Tahíche is another impressive installation where nature and architecture reaches an equal relevance. In Mirador del Río, the panoramic view combines blue, white and grey among the contrast of the volcanic rocks, the sea, and the reflection of the sky in the windows of the installations. Jardin de Cactus is an emblematic garden where the prickly cactus harmonizes with the artistic reforms, and the volcanic land takes part in the art work. In conclusion, the biggest piece of art by César Manrique was the island of Lanzarote. The island gets transformed into an unique pictorialization of the vision of the artist himself.

César Manrique was the kind of person who tried to live without being surround by artificial things; he was always trying to connect with nature. He didn’t smoke or drink alcohol, but just enjoyed life as purely as possible. However, in a horrible irony, he left this world in a tragic car accident in 1992 near his home town, Arrecife. Sometimes life acts like a paradox and determines people’s lives in the opposite direction they expect. A man who fell in love with the nature of his home island, found his death between the cold material of an automobile. However, Lanzarote will always remember and value his efforts for respecting the heritage of this corner of the world.