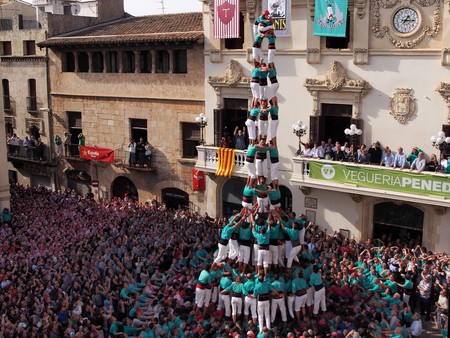 In the middle of a Barcelona plaça, a trembling tower of red clad bodies rises tier by tier, the broad-backed men at the base sweating and shaking under its weight, until the tiny girl shimmies to the summit and raises her arm in victory. It’s a terrifying spectacle, but one of which its fearless participants, or castellers, are tremendously proud, for castell building is central to Catalan culture.

The Catalan tradition of building human towers or castells (the Catalan word for ‘castle’) originated in Valls, near the city of Tarragona in Catalonia, an autonomous community of Spain with its own distinct language and culture. Since the 1980s the phenomenon has become increasingly popular and widespread, and colles (or ‘clubs’) have now been established throughout Catalonia and even in the Balearic Islands. In 2010, the castells were classified by UNESCO as one of the Masterpieces of the Oral and Intangible Heritage of Humanity.

L’enxaneta at the top of the castell | © Katie Stagg

Despite Spain’s economic turndown, the castell tradition stronger than ever before. The clubs – which also organize social activities such as dinners and concerts – serve as an important tool of integration, welcoming members from a diverse range of backgrounds, from laborers to businessmen, students to old-age pensioners; with the country’s high unemployment rate the clubs are a treasured point of contact for those out of work. Catalonia’s increasingly resolute fight for independence has also brought about a surge in popularity for the region’s human-tower building tradition, which serves as an important source of national pride and a point of differentiation from the rest of Spain.

So what is the secret underpinning these swaying spectacles? Those forming the base of the tower – the pinya – are the first to take their positions. As the function of the pinya is to sustain the weight of the tower (and to act as a ‘safety net’ in the event of upper tiers collapsing), this is usually composed of a huddle of heavyset men. When the base layers are deemed sturdy enough, the gralla (a traditional Catalan reed instrument) begins to sound, signalling the various stages of construction, and the people forming the upper tiers then swiftly shimmy up the base layers using their fellow members’ waist sashes (faixes) for leverage. Various formations are possible depending on the number and distribution of people, but the one unchanging feature is the enxaneta, the child who scrambles to the summit and raises one hand with four fingers extended – a salute which is said to represent the four stripes of the Catalan flag – to indicate that construction is complete. De-construction occurs layer by layer, starting with the highest tiers, and is often the most difficult and dangerous part of the display.

Traditionally, this tower-building spectacle takes place as part of larger festivals, but nowadays there are numerous performances throughout the castell season, which runs from June to November. Most shows take place in city squares, usually around midday, but you can occasionally find late afternoon or, exceptionally, evening performances. The most important date in the castell calendar is the biennial Concurs de Castells. The clubs’ websites often provide a helpful schedule of upcoming rehearsals and performances, such as the Castellers de Barcelona, though these are often in Catalan.