Renowned throughout Madrid for its spectacular roast meats, old-world atmosphere and literary connections, Botín is a bastion of Spanish gastronomic tradition. With an unbroken history stretching back almost three centuries, it also stakes a claim to the title of ‘world’s oldest restaurant’. We take a trip to the Spanish capital to uncover the secret of its longevity. 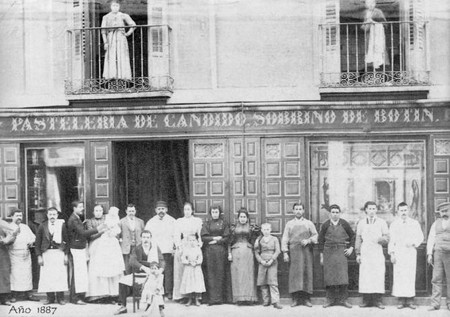 ‘Botín is the magnificent restaurant where new things are roasted in old pots,’ wrote the celebrated 20th century author Ramón Gómez de la Serna, a master of the greguería, a snappy one-liner designed to showcase wit and insight, and a literary form of which he was particularly fond. But as charming and accurate as Gómez de la Serna’s summary may be, there’s a little more to Botín than that.

To say that the pots at Botín are old is something of an understatement; the restaurant is widely reputed to be the oldest in the world, a claim recognized by the Guinness Book of Records. Opened in 1725 by Frenchman Jean Botín and his wife, it has occupied its site on Calle Cuchilleros, close to Madrid’s resplendent 17th century Plaza Mayor, for almost 300 years. Inherited by Botín’s nephew who added the ‘sobrino de’ (nephew of) to the restaurant’s title, it is now in the hands of the González family and has been so for three generations. With the help of a small army of chefs and suitably stiff Castilian waiters who bustle about in bowties, dress shirts and white jackets with little black buttons, they have ensured that it has remained all but unchanged over the years.

Tip your hat to the man on the door and step over the honey-colored wood of the threshold and you’ll find yourself in a warren of panelled dining rooms connected by neatly tiled corridors and creaking staircases. There are more tables down below, beneath the lanterns and the brick lined arches of the restaurant’s cellars, their walls now populated with brightly painted ceramics and sombre still-lifes. 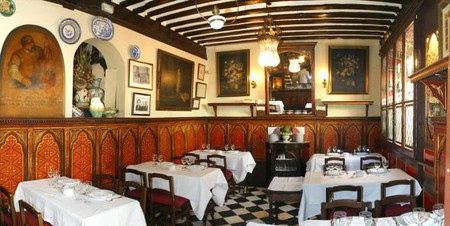 The interior of Botín | Courtesy of Botín

But if Botín’s painters, decorators and conservators have done themselves proud, it’s the restaurant’s food that is the real secret of its staying power. Once again Gómez de la Serna hits the nail on the head; Botín does indeed specialize in roasting ‘new things’: suckling pigs from the nearby town of Segovia and tender young lambs from the hills around Burgos to be precise. The roasting takes place in the restaurant’s wood burning oven operated by red-faced chefs wielding long wooden paddles. Decked out in blue and white tiles painted with pastoral scenes, the oven is as old as Botín itself, unchanged since the day the restaurant opened. 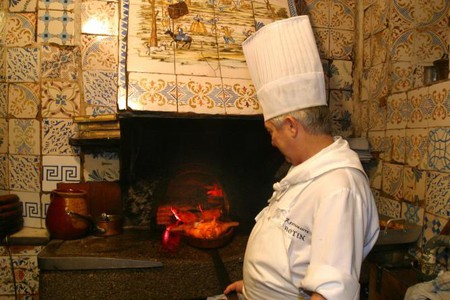 It’s from this carefully controlled inferno that Botín’s signature dish of cochinillo (suckling pig) arrives, its skin a rich shade of caramel, brittle under the weight of a knife. Breathtaking in its succulence, it’s accompanied by nothing but a brace of roast potatoes to mop up the juices. Nor is it in need of anything else; save the companionship of a bottle from the restaurant’s expansive wine cellar.

Almost as fine are Botín’s seafood dishes, Spanish classics like cuttlefish cooked in its ink, roast Cantabrian hake and clams. In winter sopa de ajo (garlic soup) is a prominent feature, with cooling gazpacho in the summer months. Then there are the side-dishes of Segovian-style mushrooms and artichokes with ibérico ham and, of course, the puddings. Here the menu includes a bitter-sweet crème caramel and the famous tarta Botín, a cream-filled layer cake that’s as decadent as it sounds. 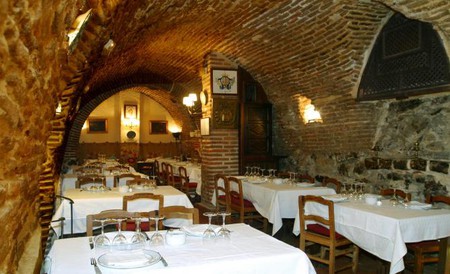 The cellar | Courtesy of Botín

In light of all that, it’s seems hardly surprising that Botín has inspired its fair share of art. Alongside the tributes paid by Gómez de la Serna is a reference to the restaurant in Fortunata and Jacinta, a much-celebrated work of Spanish literature by Benito Pérez Galdós published in 1887. It appears again in Galdós’ later work Misericordia, in which Doña Francisca Juárez sends out for ‘two roast chickens, four fried fish and a hearty chunk of steak, accompanied by sweet ham, egg yolk garnish and a dozen crème pastries’ for her household.

Writing after the Spanish Civil War, Arturo Barea features the restaurant in his The Forging of a Rebel where one character is reported to be particularly fond of the cochinillo. ‘She eats it alone – if we don’t go with her – with a large dish of lettuce and half a litre of wine,’ writes Barea, but who can blame her.

Then there are the restaurant’s admirers from overseas, among them Graham Greene and a chap called Ernest Hemingway, who frequented Botín during his time in Madrid, befriended the owners and, legend has it, once unsuccessfully tried to make a paella on the premises. Perhaps by way of apology, he mentions Botín in both Death in the Afternoon and in The Sun Also Rises, setting the final scene of the latter in one of the restaurant’s dining rooms. 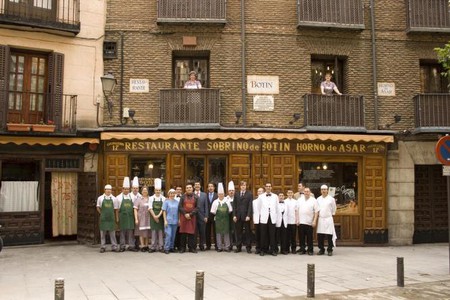 Botín has even crossed paths with an artist (Francisco de Goya once worked there as a waiter) while many more literary greats have been entertained on the premises. The restaurant’s history is consequently sprinkled with a confetti of household names. It’s true that Botín has had a long time in which to make such famous friends, but it also proves just how successful you can be roasting new things in old pots.
Botín, Calle Cuchilleros 17, Madrid, +34 91 366 42 17