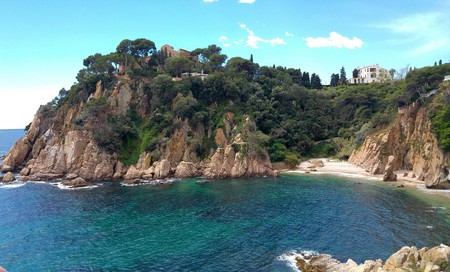 The Costa Brava extends from just north of Barcelona all the way up to the French border. It’s characterised by its wild and rugged landscape, a few popular resorts, small fishing villages and seemingly endless miles of idyllic shoreline, hiding small bays, inlets and gorgeous coves. Here are some of our favourite secret beaches on the Costa Brava.

Located near Mont-ras, El Crit lies well-off the beaten track, and like many of the secret beaches in the Costa Brava, is only accessible by foot. El Crit, meaning ‘The Scream’ is a small sandy cove, surrounded by giant rocks, and is associated with a terrible local legend of murder and pirates. It is said that pirates travelled the waters of the Mediterranean in the 16th and 17th centuries and used small coves like this for refuge, often stealing from nearby villagers and sometimes taking villagers as slaves. Legend has it that pirates who were staying on the beach found a nearby farmhouse, occupied by a farmer and his two daughters. The pirates decided to take one of the daughters back to their ship, when they got to the beach, to try to save herself, the girl bit off the pirate’s finger. He became so angry that he killed her right there and then. The story says that the girl’s horrifying scream was so loud that it woke all the villagers, and since that day the cove has been known as El Crit. 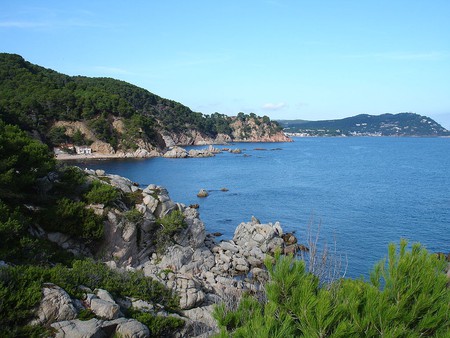 Hidden within the Cap de Creus Natural Park, just north of the town of Cadaqués, lies Cala Portaló, which can be reached via a turn-off on the footpath towards the Cap de Creus Lighthouse. Tucked in between the rugged cliffs, the sea enters a shallow cove with a charming pebble beach. Like many of the coves in this area Cala Portaló is a favourite with nudists, however you are free to wear whatever you want. The artist Salvador Dalí lived near this beach and was inspired by the landscapes here. Many of the unique rock formations in the area feature in his most famous paintings.

One of the most stunning beaches around, Cala Estreta is certainly remote – located around a 20 to 30-minute walk from the nearest village of Palamós. From Es Castell beach in the village, take the footpath into the forest and then follow it north along the coast. Passing many postcard-perfect coves and inlets along the way, you will finally reach Cala Estreta – a small sandy bay bisected by a giant rock formation called ‘The Red One’. Look out across the sea and you’ll see more unusual rock formations such as the ‘Drac Adormit’ or ‘sleeping dragon’. 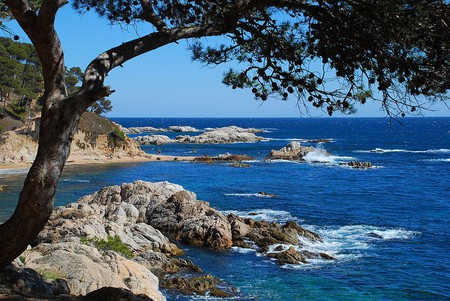 Found near the small village of Begur, in the Baix Empordà region of the Costa Brava, Fonda Beach is one of the most picturesque in the area. Lying at the bottom of the foreboding Begur Cave, it is only accessible via a footpath and down a set of steep steps. Its name in English means ‘Deep Beach’, because of its incredible deep turquoise water, it is so clear, it’s almost like looking through coloured glass. A mixture of silvery grey sand and pebbles, it’s a quiet, natural spot with no development whatsoever. 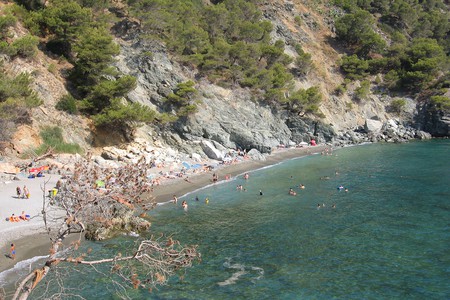 Located far away from any urban or residential areas, this remote beach can be found in between the larger towns of Tossa de Mar and Sant Feliu de Guíxols. To get there, drive around 11 kilometres north of Tossa de Mar, and then take a footpath off road and walk for one kilometre down to the shore. It comprises a mixture of shingles and larger rocks, and has lovely clear water – ideal for swimming. There are also a couple of reefs lying just off shore, so remember to bring your snorkel and mask.