© gln / Pixabay
An ancient city that has existed in some form since at least the Roman Era, Barcelona is steeped in history, and this is visible nowhere better than in its architecture. In particular, Barcelona has some remarkable churches that stand as testimony to the many changes the city has undergone. Here’s our pick of the most magnificent churches in Barcelona you need to discover.

Building, Church
The jaw-dropping Sagrada Família is the city's most famous building | © Prisma by Dukas Presseagentur GmbH / Alamy Stock Photo
Book Now
No mention of churches in Barcelona could go without mentioning the jaw-dropping Sagrada Família – even if this is one of the most controversial churches in Spain. Designed by renowned Catalan architect Antoni Gaudí, the church has been under construction for over 100 years but is not due to be completed before 2026 at the earliest. Widely considered Gaudí’s magnum opus, the church is rich in symbolism, covered with intricate details from both the spiritual and natural world and when completed, will be the tallest building in Barcelona.
More Info
Open In Google Maps
401 Carrer de Mallorca, Barcelona, Barcelona, 8013, Spain
+34932080414
Visit website

Cathedral
Construction of the Barcelona Cathedral began in the 13th century | © Tim Moore / Alamy Stock Photo
Book Now
Formally known as the Cathedral of the Holy Cross and Saint Eulalia – Saint Eulalia being the co-patron saint of the city – the Barcelona Cathedral is located in the Old Town of Barcelona. Sometimes referred to as the Gothic Cathedral because of its impressive façade, this is actually a neo-Gothic addition from the 19th century, much more exaggerated than the original Gothic design. To get a peek of what the cathedral would have looked like before, walk down the sides of the church where you can still see original 14th-century details such as stained glass windows and gargoyles.
More Info
Open In Google Maps
s/n Pla de la Seu, Barcelona, Cataluña, 8002, Spain
+34933151554
Visit website

Not to be confused with Santa Maria del Mar, this 14th-century church is known as the Saint Mary of the Pine owing to its location on Plaça del Pi where a pine tree has stood since the 16th century (although this particular tree was planted in 1985). Another example of Catalan Gothic architecture, Santa Maria del Pi is easily recognised from afar thanks to its octagonal bell tower, which stands some 54 meters high. Close up, be sure to admire the rose window at the entrance – destroyed in 1936 when anarchists attempted to destroy the church, it was faithfully restored in 1940. 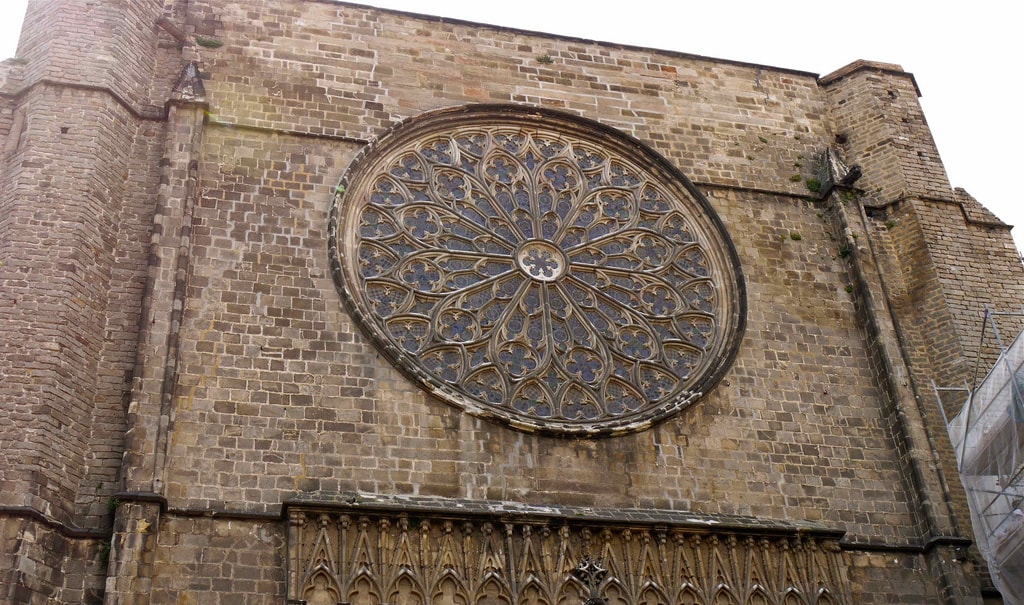 Expiatory Church of the Sacred Heart of Jesus

Most commonly referred to simply as the Sagrat Cor, or Sacred Heart, this relatively modern church was constructed between 1902 and 1906. It has the unique advantage of being visible from nearly every corner of Barcelona as it stands at the top of the Tibidabo Mountain on the edge of the city. A Roman Catholic church, its construction was prompted by rumours that a Protestant church was going to be built there instead. Another remarkable feature of the church is its blend of architectural styles, from a Baroque entrance to a neo-Byzantine crypt and a neo-Gothic church exterior. 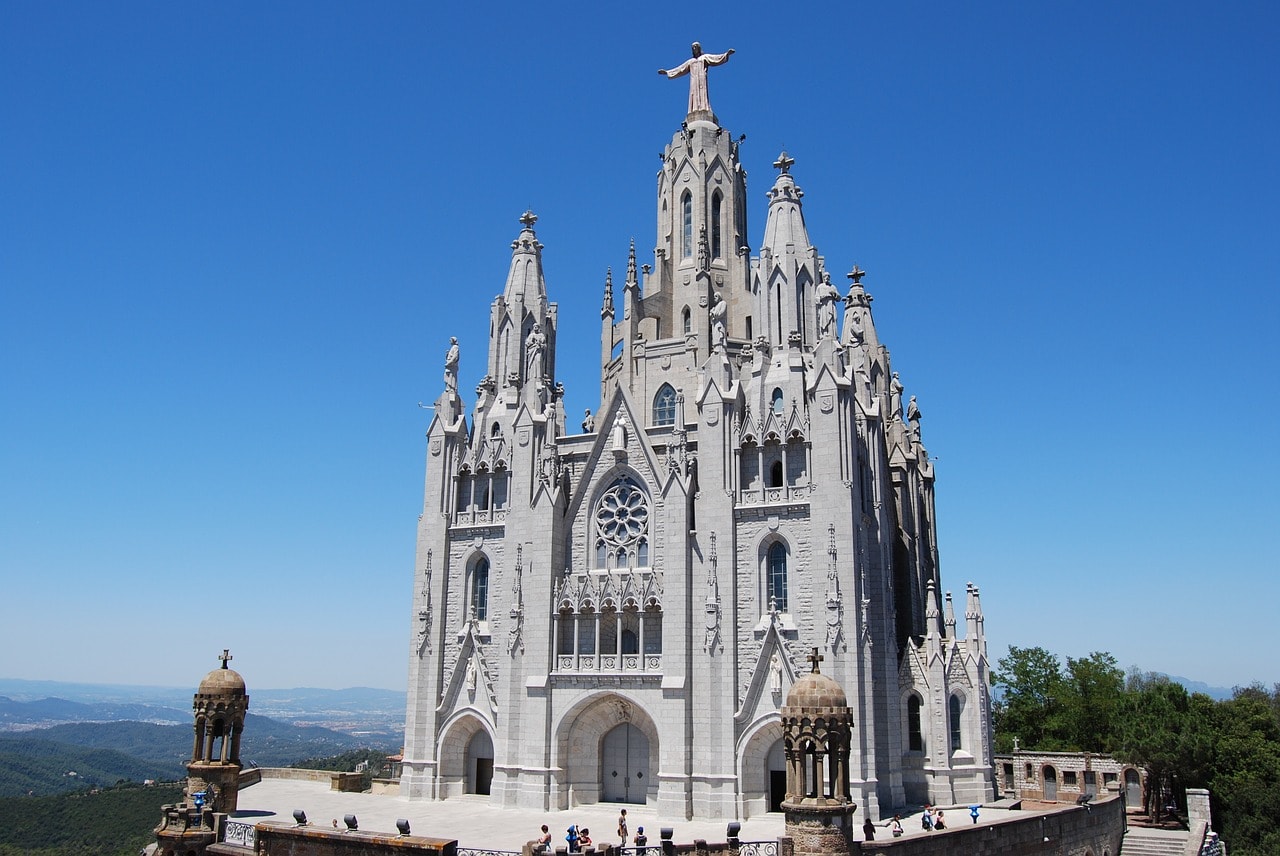 Something of a hidden gem, the church of Santa Anna of Barcelona is an often overlooked church tucked away in the city centre, not far from Plaça Catalunya. And yet Santa Anna of Barcelona has been around since much longer than many of the buildings that surround it today, as it was founded in 1141. Aside from its early 14th-century façade, one of the most remarkable features of the church is its 15th-century cloister, which contains a beautiful interior courtyard brimming with plants and trees. 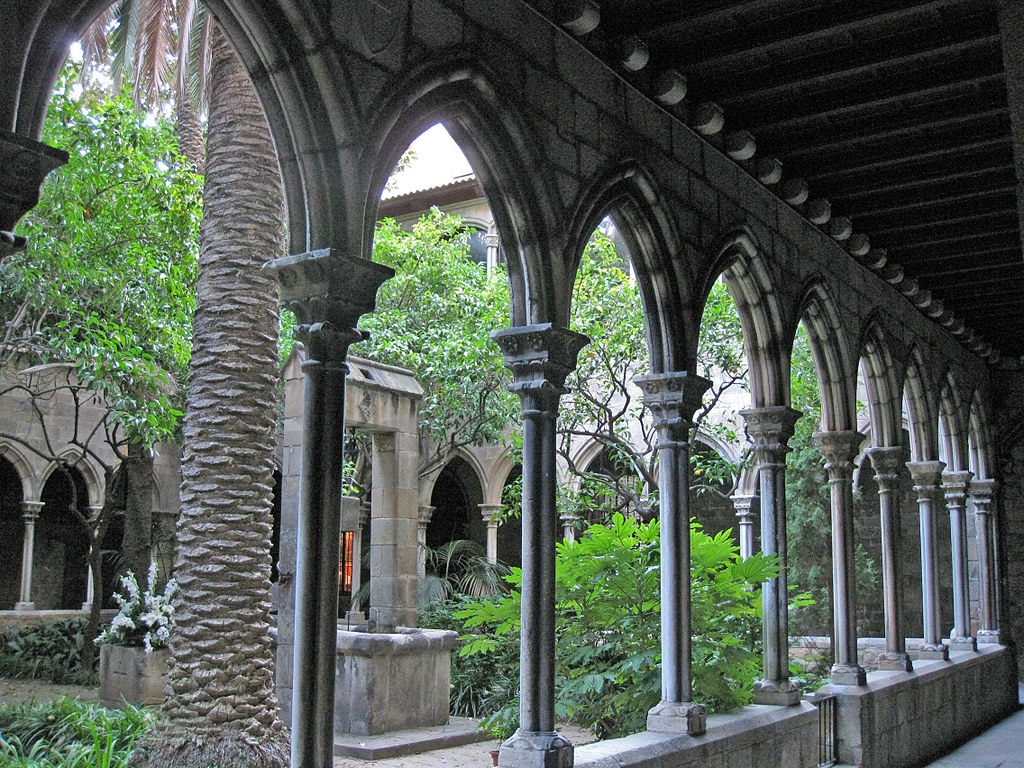 While there’s undoubtedly reason to admire the design of this baroque-style church, unfortunately the main reason that the church of San Felip Neri is so remarkable is a lot more sombre. During the Spanish Civil War, the church – and much of the surrounding area, including the adjacent Sant Felip Neri school – came under heavy bombardment by Franco’s forces. Some 42 people died that day, most of them schoolchildren who had taken refuge in the church. Rather than repair the damage, the church authorities decided to leave the church façade as it was, serving as a lasting reminder of the suffering endured that day. 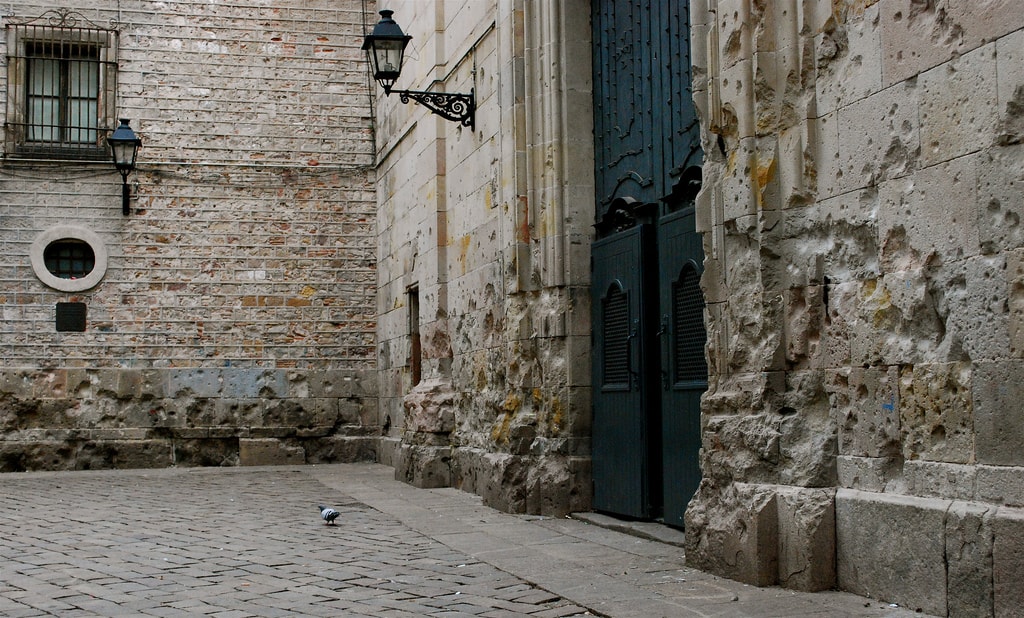