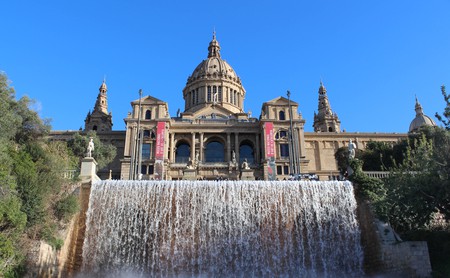 What’s the first thought that comes to mind when someone says “Barcelona”? The beach, the tapas, or…the Sagrada Familia? Antoni Gaudí created this masterpiece during a time known as Catalan Modernism. Towards the end of the 19th century, Catalonia experienced a movement of cultural renewal. The middle class and industrialization were on the rise, both of which had an effect on architecture. But nature also came back into focus. Culture Trip explores seven of the most stunning modernist sites in Barcelona.

The House Of The Dragon: The Casa Batlló

Book Now
Imagine letting Gaudí do as he pleases — what do you think might happen? Perhaps his client, Josef Batlló, was somewhat surprised when he saw the initial plans to convert this building. A house protected by a dragon? A façade that feels as if it was underwater because of mosaics made of ceramics and glass? It sounds unbelievable, but not only did it become real, Casa Batlló has been a masterpiece of Catalan Modernism since 1904. By the way, the dragon keeps watch from the roof, which slowly becomes one with the legendary creature’s back due to its scale-like design. Go ahead and stop by for a visit!
Open In Google Maps
43 Passeig de Gràcia, Barcelona, Catalunya, 8007, Spain
+34932160306
Visit Website
Give us feedback

The Quarry: The Casa Milà

Book Now
The Casa Milà’s cold, hard appearance gave it its name: La Pedrera, meaning ‘The Quarry.’ In 1906, the industrialist Pere Milà i Camps commissioned Gaudí to create this building. At the time, Gaudí was 54 years old, and at the height of both his career and his creativity. His style was mature and beyond critical opinions. It was also the last time that Gaudí worked for a private citizen, and he created a groundbreaking work of art — both technically and artistically. Nowadays, you can visit the impressive roof deck known as the ‘Espai Gaudí,’ where Gaudí’s process is on display, as is an apartment with its initial furniture and the famous Gaudí tiling.
Open In Google Maps
92 Passeig de Gràcia, Barcelona, Catalunya, 8008, Spain
+34932142576
Visit Website
Give us feedback

A Hospital Unlike Any You’ve Ever Seen! 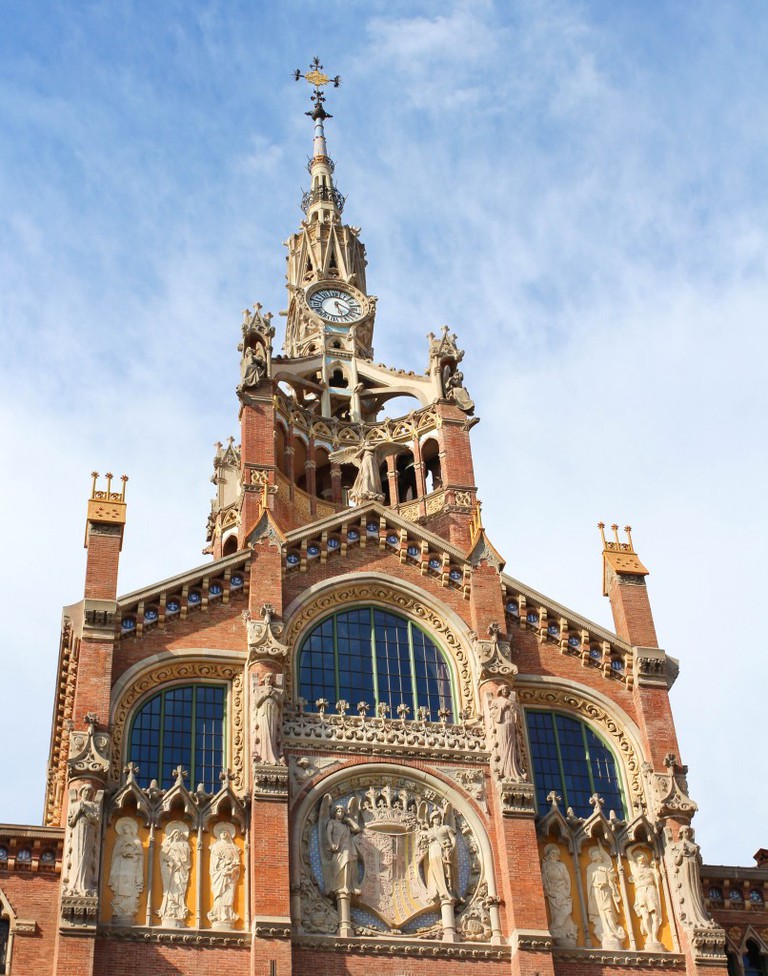 Hospital de Sant Pau | © Céline Mülich
However, Gaudí wasn’t the only architect to influence Barcelona’s cityscape. Lluís Domènech i Montaner designed a building that resembles an honorable old private university much more than a hospital. Construction on the Hospital de la Santa Creu i Sant Pau began in 1902, and from 1930 to 2009, it was even used as a hospital. Afterwards, the city of Barcelona decided to make this modernist building accessible to the public as a museum, and in 2014, the time had come. The palace and its 12 pavilions have been ready for a visit ever since. The intricate, artful façades and the elaborately decorated main building will fascinate you.
Open In Google Maps
89 Carrer de Sant Quintí, Barcelona, Catalunya, 8041, Spain
+34932919000
Give us feedback

A Palace Of Dance And Music

The ‘Palau de la Música‘ was also designed by Lluís Domènech i Montaner between 1905 and 1908. Its façade is dedicated to modernism; apart from the brick walls, some of the decorative elements include colorful mosaics, sculptures, ornate columns, and a parapet supported by glass. You want to see the inside? No problem! The concert house offers a broad program, including guitar music, flamenco dancing, and classical concerts. You can also take a tour instead of watching a performance. The tours are worthwhile, too, because the inside is artfully decorated and crowned with a delicate glass ceiling. The interior design incorporates images of muses, flowers, and the names of great composers such as Beethoven or Bach. 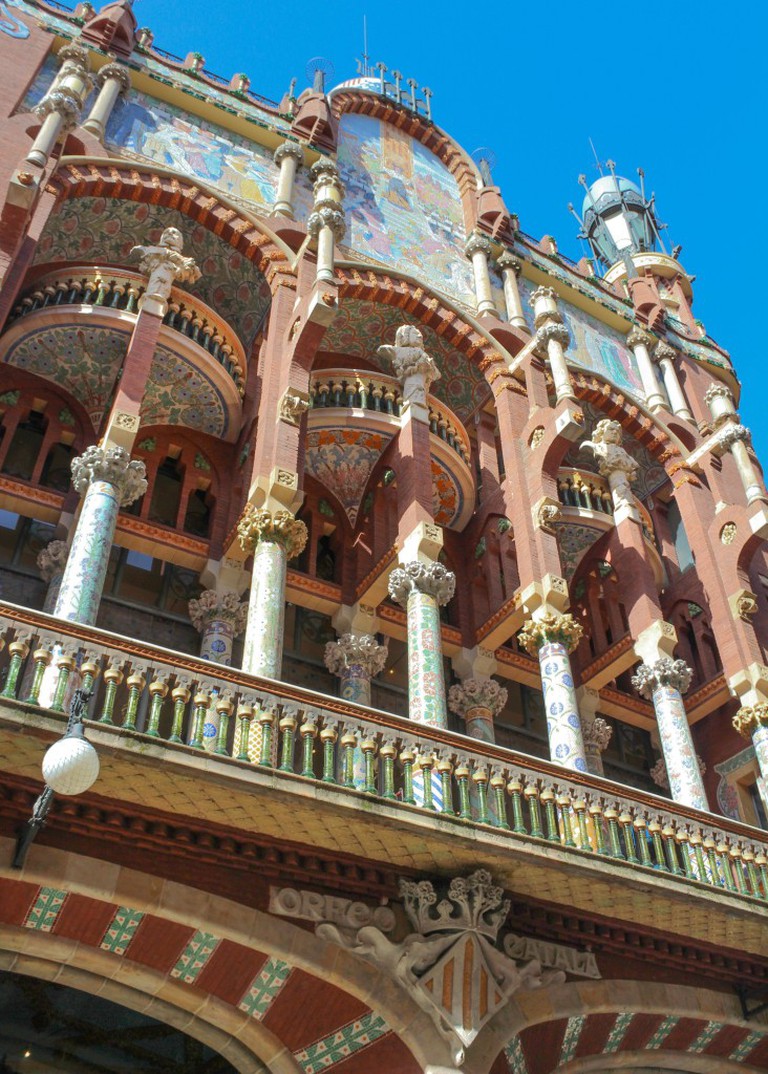 A Factory On Its Way To Becoming An Exhibition Hall 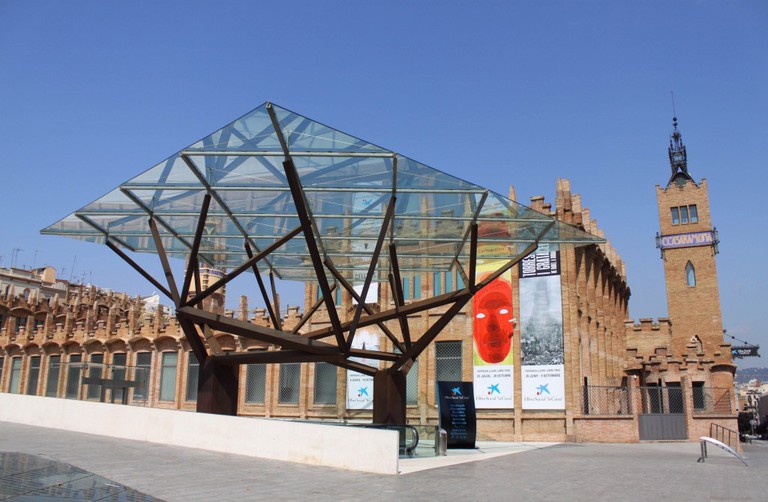 Caixa Forum, Entrance Area | © Courtesy of Caixa Forum
Another famous Barcelona architect is Josep Puig i Cadafalch. In 1911, he designed a completely different kind of building, which is now known as the Casaramona Factory. Its main component is brick, and decorations are kept to a minimum — a sign of rationalism, which was slowly taking modernism’s place.

The factory’s life has been a varied one. During the 1929 World’s Fair, it was used as a warehouse. From 1940 onward, the National Police used it as a garage, and since 1963, the building has belonged to the Caixa Bank. The bank started using the former factory as an exhibition hall starting in 1992: the CaixaForum. It regularly hosts exhibits on art, culture, film, and photography.
Open In Google Maps
6-8 Avinguda Francesc Ferrer i Guàrdia, Barcelona, Catalunya, 8038, Spain
+34934768600
Visit Website
Give us feedback

And What Did These Buildings Look Like From The Inside? 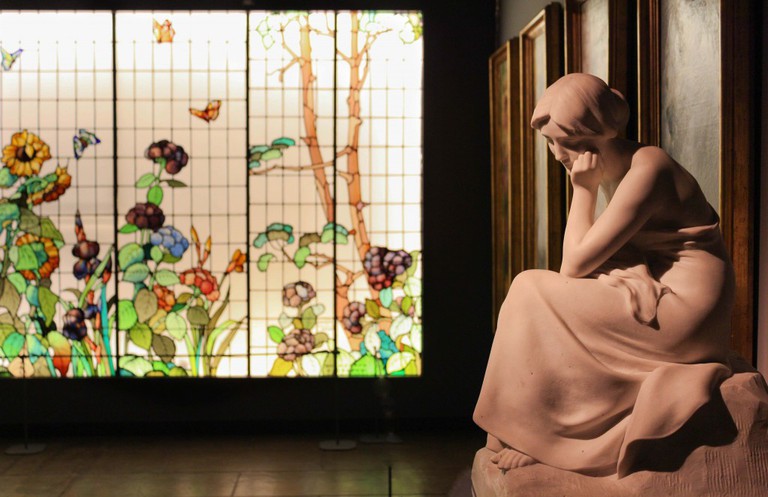 Museum of Modernism, View Of The Sculpture And Painting Section | Courtesy of Museum of Modernism
You can discover some of the other artistic styles found in modernism in the Museo del Modernismo. The furniture of the time was unusual, too. You will find impressive cabinets, tables, and chairs, decorated with figurines such as dragons, bats, and women integrated into the woodwork. But don’t get too excited; the furniture is, unfortunately, not for sale. The museum also features modernist sculptures, paintings, and glass works. Immerse yourself — feelings of another time and scenes from day-to-day life of the modernist middle class await!
Open In Google Maps
48 Carrer de Balmes, Barcelona, Catalunya, 8007, Spain
+34932722896
Visit Website
Give us feedback

000 Years Of Art In A Single Museum

Book Now
The palace sitting at the foot of the Montjuic was built for the 1929 World’s Fair. Nowadays, the MNAC — Museu Nacional d’Art de Catalunya — is located in this building. It combines 1,000 years of Catalan and Spanish art, including, obviously, Catalan Modernism.

The modernism section’s highlights are two paintings by Ramon Casas, one of the most important Spanish artists in the 20th century. He helped define the Catalan art movement in his day. Doesn’t that tandem make you want to cruise the city of Barcelona?

Before you do that, though, it’s worth taking a break on the steps of the MNAC. Enjoy the view of the Plaça d’Espanya, impressively stretched out at your feet.
Open In Google Maps
Palau Nacional, s/n Parc de Montjuïc, Barcelona, Catalunya, 8038, Spain
+34936220360
Visit Website
Give us feedback
Give us feedback