How to Attend a Real Madrid Match

For football fans, visiting Madrid is like a pilgrimage. Seeing one of the world’s greatest football teams play is an unforgettable experience, but what is the best way to tackle it? From buying tickets to what to do on match day, follow our guide to attending a Real Madrid match.

The easiest way to buy your tickets is on the official Real Madrid website. The next couple of games should be available on the website – tickets come on sale around a week ahead of match day – usually on a Monday morning.

Alternatively, you can buy tickets at ticketmaster.es, which, like Real Madrid’s website, sells tickets at the official price.

You can also buy tickets at the Santiago Bernabéu stadium, at ticket office 44 in tower A. Tickets go on sale here the day before a match.

Ticket touts sell tickets around the stadium on match day, but it is not advisable to take your chances with one of these – more often than not tickets are fakes, and prices are hiked up to much more than they would be if you bought the ticket through official channels. 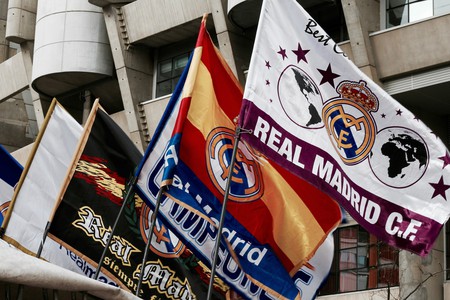 Real Madrid’s Santiago Bernabéu stadium, built in 1947, has a capacity of 80,000, so there is plenty of choice when it comes to where to sit.

Seats are split into several categories:

Seats higher up in the stadium are generally cheaper. Tickets start from around €30 for members of Real Madrid’s fan club. Expect to pay from around €45 for the cheapest tickets if you’re not a member of the fan club, the Madridistas. Ticket prices can vary depending on who Real Madrid are playing (Champions League matches are more expensive, for example) and where you are sitting (VIP tickets can be in the hundreds of euros).

Games can sometimes be rescheduled, so it is advisable not to book your flights too far in advance. If you’re coming to see a Saturday match, try to stay the whole weekend, just in case the match is moved to the Sunday with little warning.

Getting to the stadium

The huge Santiago Bernabéu stadium is located at its own metro stop, on Line 10 (dark blue colour) of the Madrid Metro. From the centre of the city, get on the metro at Sol and take Line 1 to Tribunal, where you can change onto Line 10. Then it is five short stops to Santiago Bernabéu.

The stadium is located on the wide boulevard, the Paseo de la Castellana, one of Madrid’s main arteries. Head into the little streets off the main road to find pre-match bars where you can mingle with fellow fans.

Make sure you arrive early to give yourself plenty of time to enjoy a pre-match beer and find your seats. 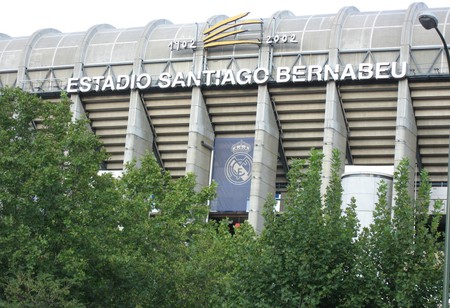 Players to look out for

One of the joys of seeing Real Madrid is that you have the privilege of watching some of the world’s finest players in the flesh. Portuguese striker Cristiano Ronaldo has won five Ballon d’Or awards, tied for the most of all time, as well as being the first player in history to win four European Golden shoes, awarded to the leading European goalscorer each year.

Other key players to look out for include Gareth Bale, Sergio Ramos and Karim Benzema – not to forget the team’s legendary manager, Zinedine Zidane.

If you want to get yourself a Real Madrid football shirt, then you could visit one of the official Real Madrid stores in the centre of the city ahead of match day, or buy online before you get to Madrid for the best bargains – an adult’s 2017/18 shirt will set you back €90 in the official store.

Tourist shops all around the centre of Madrid are packed with scarves, T-shirts and other football memorabilia, so it won’t be hard to find some football stash to show where your loyalties lie on match day. There are also usually lots of stalls around the stadium selling scarves and hats if you want to make a last-minute purchase.

Beware, though of knock off football shirts that sellers usually try to flog outside the stadium in the run up to the match. 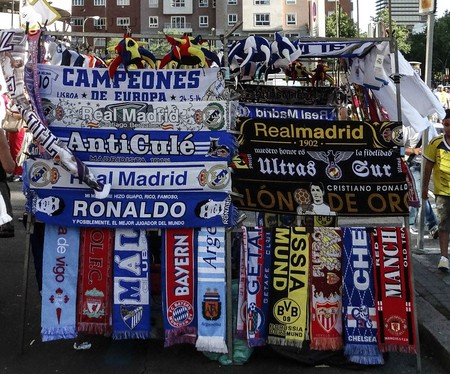 No alcoholic drinks are sold inside the stadium, so many fans go for a drink in one of the surrounding bars beforehand. It’s a great atmosphere as fans mill around, getting excited for the upcoming match.

If you really want to blend in with the locals then take along a bag of pipas, or sunflower seeds. Chances are you’ll spot many fans nibbling on these seeds – one of the most popular snacks in Madrid.