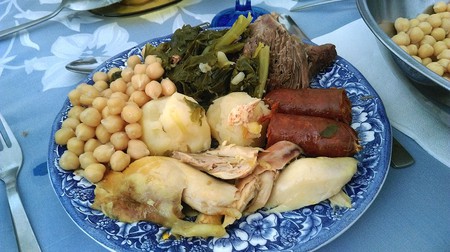 Cocido stew is one of Madrid's most traditional dishes | © Rubendene/Wikipedia

Cocido madrileño, Madrilenian stew is one of Madrid’s most famous recipes. A staple in Madrid’s cooking scene, the stew’s main ingredient is chickpeas, but also includes meats, vegetables and more. Typically served in winter, this warm and hearty dish is so popular that nowadays you can find it served all year round at restaurants all across Spain.

While the origins of cocido in Madrid aren’t clear, it is known that the dish was popular during the Middle Ages and that the chickpeas were often used by Sephardic Jews in cooking, which may be how they came to be popular all over Spain. The slow-cooking dish was vital to the Jews as it allowed them to still eat well during Shabbat – the day of rest. The first versions were kosher and didn’t include meat, but during the 15th century, the time of the Spanish Inquisition, the dish expanded to include different types of meats in order for Christians to distance themselves from the Jewish origins of the dish. Later, it became more popular as a lunch dish offered by restaurants as blue-collar workers wanted something cheap and hearty for lunch. 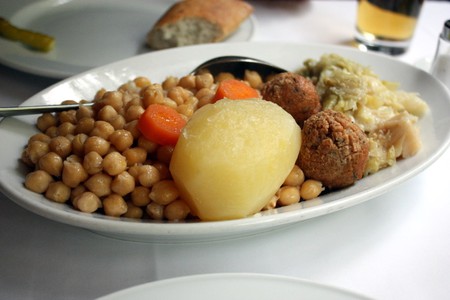 Chickpeas are the main ingredient | © Krista/Flickr

The way cocido is served differentiates it from many other styles of stew around the world. The stock must be separated, to which noodles may be added. Then, the chickpeas and the vegetables are separated out, followed by the meat or chorizo. Sometimes, a tomato-style sauce is made to accompany the chickpeas and vegetables. What you’ll see on your plate looks more like a well-rounded meal including meat, veggies and legumes, versus a bowl of soup or stew. 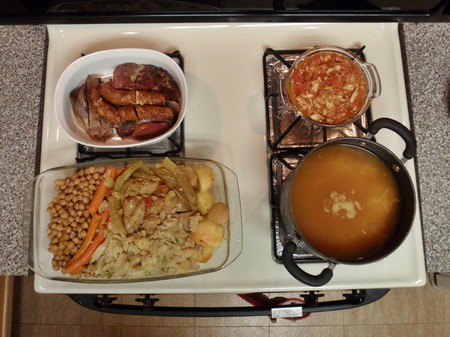 Cocido is often separated out before served | © Daniel Lobo/Flickr

Each family or restaurant makes cocido in their own special way, adding what vegetables and meat they please. Typical vegetables added are most likely potatoes and carrots, but can also be cabbage or green beans. Meat is almost always pork (fresh or cured), or chorizo, morcilla (blood sausage), ham, chicken and lard. Some variations of the dish can include a type of meatball made from ground beef, and often times ham or beef bone is thrown in to give the stock an added depth of flavor.

You can find cocido at almost any traditional Spanish restaurant in Madrid, or if you have the opportunity to eat with a family, this stew is often made at home too.