An Interview With Mar Cerdà, The Cut Paper Designer

‘I was doing dioramas of spaces I liked or that inspired me on my trips and one day I spoke with Ken Harman, from Spoke Art Gallery. I showed him my work and he asked me if I loved cinema. Of course! I said. Then he asked me if I liked Wes Anderson‘s films and if I would have liked to be part of his annual show tribute to him: Bad Dads. As a fan of Anderson’s films I accepted immediately! ‘

This is how my interview with Mar Cerdà began, the 31-year old artist living in Barcelona, who studied cinema at ESCAC and specialized in art direction. ‘When I had the opportunity to illustrate a children’s book suddenly 2D wasn’t enough for me… So I started cutting paper and creating a little house in 3D for the main characters of my first book and I got hooked on cutting…I love to recreate spaces, even without characters in it, because I firmly believe that a character can be defined by a space, even if it is not present at all…’ This was the starting point for us to discover Mar’s beautiful work more in detail.

Let’s talk about these popular Wes Anderson Diorama series, what has inspired you most from Wes Anderson’s aesthetic and stories?

The sense of theater and the use of frontal view are some of the most present characteristics in my illustrations, that’s why Wes Anderson’s films fit very well with my way of illustrating, with his symmetrical and frontal view compositions. I’m a big fan of his films, I love his personal point of view, his strong identity in every one of his works and that he is capable of doing a bunch of iconic characters or places in every film that will last in time! 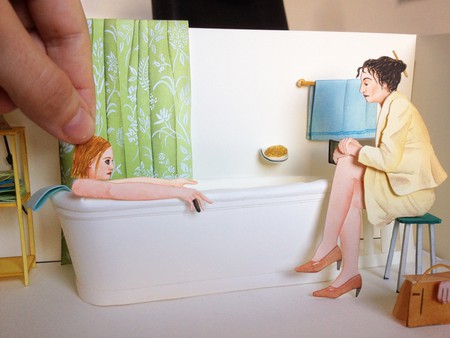 Could you walk us through the stages of a Diorama artwork creation? From the brainstorming to development phase, from the technique to your feelings across the entire process.

It all starts with a little sketch of what I have in mind and it continues with research of inspirational images: I like to find the tile design that fits on the piece, the plants that will go best with it etc. Or if it’s a movie, I like to see the scene over and over again till I have every detail clear.

Then I start cutting the structure on paper: the walls that will contain it, the doors or the windows. With that I have the idea of the proportions and I start cutting every single element. Once I have all cut out I begin with watercolors and at last I glue it all.

Depending on the piece I can spend one or two days… up to three weeks or more to finish it up. 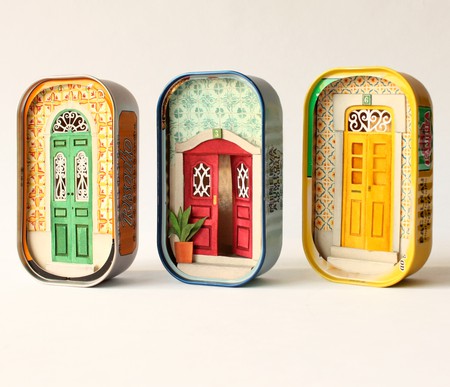 Art inside a portuguese tuna can, inspired in Lisbon and Porto’s streets | Courtesy of Mar Cerdà

If you were asked to pick one artwork that represent you as an artist and your design career so far, what would it be and why?

It’s difficult to choose only one! But I guess I would choose my Darjeeling Limited piece, which was the first piece I did from Wes Anderson’s work and the first piece that was for a gallery. As it was the first one it has something magical, something free in its process, although it’s almost invisible it is perhaps lost in the next ones. I think it always happens in the first piece of something new, when you don’t know exactly where you are going but there is a sense of freedom in there. 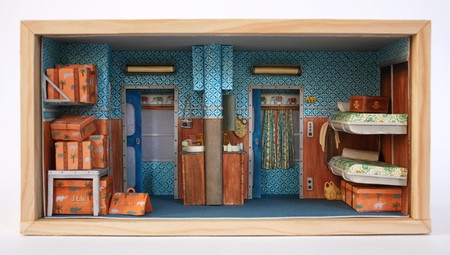 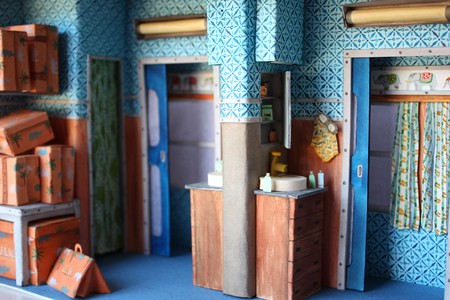 What do you think about Instagram and social media sharing, in general, as a platform for designers and artists?

One of the things I love the most about my creations is the process of it. And social media allows me to share not only my final piece but all the parts between the idea and the final art. I love how I feel so near to the followers, how I can learn from them: what they like best, what they don’t like that much, even to improve my English! I’m an Instagram addict, it’s where I discover a lot of great paper artists, where I find a lot of inspiration and I learn what’s going on in galleries around the world. Actually, Instagram was the place where I started connecting with them and where I had my first group exhibition opportunity!

You worked for several publishing houses illustrating children’s books. In your opinion, what is the role of printed illustration for kids today, compared to the digital and virtual world?

We live in a digital world where everything seems to be fast, everything seems at your disposal at any moment, but most of the things that matter are slow. So I think it’s important to keep doing simple things as we have always been doing, like reading books in paper, for example, to remind us that sometimes the virtual world is not exactly as the real world. And it’s important to share that with children as well.

You currently live in Barcelona, how is the city influencing your creative side and style?

I love my city and everything in it inspires me. I like to walk everywhere and in all my walks I always observe the details of the buildings. I’ve drawn Barcelona a hundred times! One thing that is repeated in my illustrations, and I think it’s totally influenced by my city, are tiles, for example. Here in Barcelona tiles were very popular at the end of the 19th century and nowadays a lot of houses still have them. 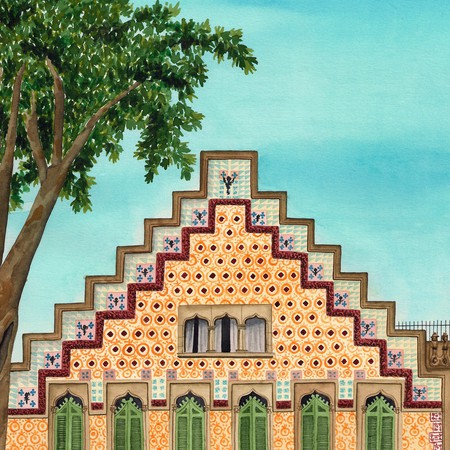 Illustrations for a Barcelona’s agenda for 2016, publishing house Mediterrània, 2015 | Courtesy of Mar Cerdà

Your artworks are displayed in galleries around the world and The Culture Trip is a worldwide community, what’s going on at the moment and where?

I have some group exhibitions with Gallery 1988 in Los Angeles with awesome topics: the next one will be this May, a TV inspired show, and another one this July, inspired by cinema. I’m also planning to collaborate with Bad Dads annual show at Spoke Art Gallery in San Francisco next fall. I love to see how a group of different people make art around a common subject and you can see all the different points of views!