Against the Odds: Madrid's Last Barquilleros

In a world that is constantly shrinking, historical traditions around identity, culture and gastronomy are more important than ever. In Madrid, one family is fighting to save a tradition that dates back to the 19th century but is in danger of disappearing.

Since he was 12 years old, Julian Cañas has made his living selling barquillos, waffles made of dough, pressed into a pattern and then rolled up into tubes to sell. Once, you would see barquilleros on the streets of Madrid regularly, but these days they are a rarity, especially those who actually make their own barquillos fresh.

There are waffle vendors on streets all over the world; so what makes the barquilleros so special?

In order to get your waffle from the vendor, you must first play a game of chance on a traditional roulette wheel. The game is simple enough, Julian explains, “you pay a certain amount of money, it used to be a peseta, or a perragorda, but now it’s a Euro, and after you pay you can play as many times as you like”. With every spin you will win waffles, but there is a risk. “There are four spikes in the machine, and if you hit one of the spikes you lose the waffles and your money. But if you don’t hit a spike, you can add up more waffles until you pull out”. 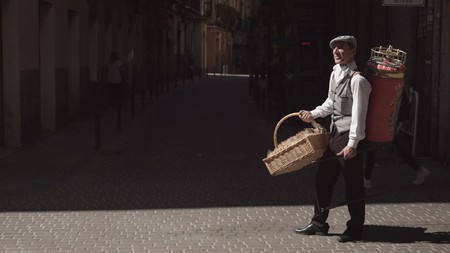 Julian taught himself multiplication and mathematics by adding up the totals of barquillos won by customers in these games of roulette. However some customers got a little too lucky for the barquilleros’ liking. “There were tricks that you could do,” he explains, “but there was a risk that the barquillero wouldn’t let you play, because you won too many barquillos.”

Perhaps the most distinctive feature of Madrid’s barquilleros is their stylish dress sense. Based on the classic Chulapo style, which originated in the 19th century in the Malasaña region of the city, it’s an eye-catching ensemble. The Chulapo outfit consists of a traditional hat, called a palpusa, a pair of salares trousers and shoes called calcos as well as a classic shirt, waistcoat, watch and jacket. This outfit was associated with workers and tradesmen in Malasaña who wanted to distinguish themselves from the noblemen of the city. These days, the outfit attracts attention as a novelty, but helps Julian and Jose Luis with their sales, as they pique the interest of passers-by. “You don’t see a barquillero every day,” explains Jose Luis, “so it interests people, and they usually ask you for photos.”

In the past the barquilleros were beloved regulars on the streets of Spain’s capital, seen at festivals and events, or even just in the park on weekends, and the closely guarded recipes for the dough for each family of barquilleros were passed down from generation to generation. The waffles are made of a dough which contains flour, vanilla, oil and water, sweetened with sugar and honey. The name barquillos came from the waffles’ resemblance to a ship or canoe, and during the dictatorship of General Francisco Franco, food shortages were so severe that they threatened the existence of the barquilleros. However, they now face a very different challenge. 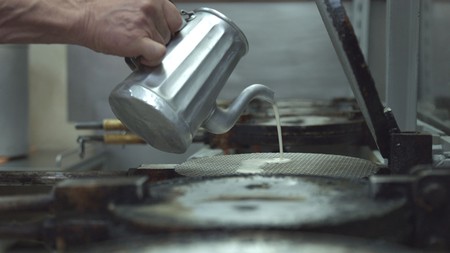 Barquillos are made using a closely guarded family recipe, and then pressed into a honeycomb pattern | © Silvio Castellanos / Culture Trip

Julian Cañas and his son Jose Luis believe that Madrid is losing many of its traditions, and that their family are the last of the artisanal barquilleros in Madrid. Julian tells Culture Trip, “the [barquillero] you see in the street doesn’t cook the waffles, he just sells them. [An artisanal] barquillero fabricates his own product and then sells it.” The pair work together in the Cañas family kitchen, where they discuss Real Madrid and other matters as they craft the dough that has made them famous. The historic Cañas family kitchen is fittingly located in the Embajadores neighbourhood, “[Embajadores] has always been Madrid’s center,” explains Julian, “it has always been the most Spanish [neighborhood]”.

However, while the area still maintains some of the traditions which made it so famous in the past, it is rapidly losing its connection with its own heritage; a fact which Jose Luis laments. “A lot of the traditions are lost,” he tells Culture Trip, “Today we have San Lorenzo’s festival, and people decorate Oso Street very nicely, but not a lot more”. He misses the old zarzuelas, a name for traditional Spanish operas, but also for street parties which are common throughout Madrid. “A zarzuela is a party with laughter, barquillos, music,” he explains, and his favourite is the Paloma Zarzuela, “Paloma is the biggest [zarzuela], it celebrates Madrid’s Patroness. The ambience is great [and] Madrid’s citizens go on holiday just to see the Paloma Zarzuela”. However, even this event has changed beyond his recognition. “They no longer respect the zarzuela,” he explains, “because at festivals they no longer play traditional music. Now they mostly play bachata, reggaeton [and] house.” Jose believes that people should be exposed to and educated on the traditional music of Madrid to feel closer to their cultural heritage and identity, of which he believes barquillos are a significant part.

They say that while it would probably not make a difference to the mayor’s office in Madrid if they were to stop selling their wares, that many Madrileños would feel a profound loss of identity, even if others were unaware of the role played by barquilleros. Jose Luis describes his dad as a hero for keeping the tradition alive for this reason. “I can’t see myself working on something different,” explains Jose Luis, “I would have to leave the barquillos, and so many people come looking for me to buy some, even from the other side of Madrid. I do it for those people.” 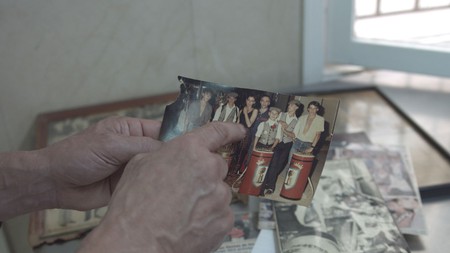 The Cañas family have been selling barquillos for generations, however the tradition is in danger of disappearing completely | © Silvio Castellanos / Culture Trip

While a barquillero may make a lot of money in a single day when there is a festival or saint’s day, at times even weekend days can be difficult depending on Madrid’s famously temperamental weather. During the winter, temperatures drop close to freezing, meanwhile the summers often see residents abandoning the streets to avoid the unforgiving afternoon sun. Luckily barquillos are also popular among tourists, especially those from Latin America and the Philippines, who have their own versions of the snack back home, brought in by Spanish colonialism. “It’s a typical treat,” Jose Luis tells me, “people eat a barquillo and come back to take more home as souvenirs”.

Despite this, Julian and Jose Luis acknowledge that they have a difficult job to keep the tradition alive. “[Without barquilleros] there would be something missing in Madrid,” explains Julian, “But if we weren’t here I think people would forget about it. They would remember it with the old photos, but it wouldn’t be alive, and that is what I want, to have [a living] memory of it”.

Without the efforts of Julian and Jose Luis, these photos could sadly become the last remnants of a proud Madrid tradition, but it’s not too late to experience Madrid’s barquilleros for yourself. You can find the last of the barquilleros in front of Madrid’s famous buildings such as the Almudena Cathedral, or at the parties and celebrations of San Isidro, in the saint’s eponymous plaza. If you can’t spot them from their unique, sharp dress sense, then perhaps you’ll hear the barquilleros’ song as it resonates around the plazas…

“Cinnamon and lime waffles, they taste so good. Delicious cinnamon waffles, for the boy and the girl.” 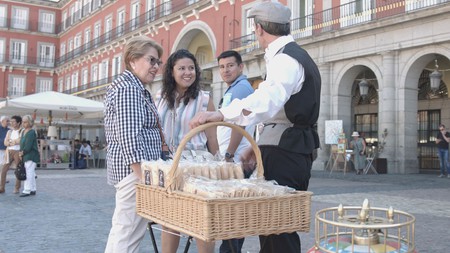