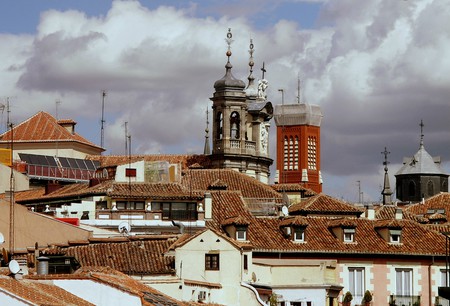 Madrid de los Austrias was the name given to the oldest part of the city during the reign of the Habsburgs, known in Spain as the Casa de Austria (hence Austrias). It comprises the area of central Madrid around Plaza Mayor and into the beautiful tapas bar-heavy neighbourhood of La Latina. Discover some hidden plazas and cultural gems on our walking tour of Madrid de los Austrias.

Begin the walking tour on the Plaza Mayor, Madrid’s 400-year-old central square. Check out the illustrations surrounding each lamppost and accompanying bench, which depict the plaza’s rich history, from trials during the Spanish Inquisition to bullfights, concerts and markets. The cafés surrounding the square are fine for a coffee, but don’t eat here; they are generally overpriced, and there will be some excellent food stops later in the tour.

Walk down the steps leading from the plaza’s south-west corner (pictured below), through the Arco de Cuchilleros, which will take you onto Calle Cava de San Miguel.

Stop and take a photo of the oldest restaurant in the world, Sobrino de Botín, which has proof in the form of its Guinness World Records certificate displayed proudly in the window. The restaurant opened in 1725, and at one point had a young Francisco de Goya as a waiter. It was a favourite hangout of Ernest Hemingway while he was covering the Spanish Civil War and has been serving up its speciality, roast suckling pig, for centuries.

Cross the street and onto….

This square is a bit of a hidden gem among the busy, tourist-heavy streets surrounding Plaza Mayor. It’s home to a couple of lovely restaurants with outdoor terraces ideal for a refreshment break of coffee, beer or wine. Don’t miss Taller Puntera, a leather shop and workshop rolled into one.

Cross this peaceful little square and pop into the Iglesia del Corpus Christi Carboneras, home to a convent of nuns and founded in 1605. The sisters make biscuits and sell them in a unique way without being seen (cloistered nuns never leave the convent).

Turn right off the plaza down the little winding street Calle del Codo, which will lead you out onto…

One of the city’s most beautiful squares used to be home to the city hall and dates all the way back to medieval Madrid. The former city hall, on the western side of the plaza, is a good example of Spanish Baroque architecture.

Continue down Calle Mayor until you reach the viaduct. Instead of crossing it, walk down the stairs and onto Calle de Segovia, a steep street leading down to the River Manzanares. Cross over the street and walk uphill, turning right onto Costanilla de San Andrés, and…

This plaza is one of Madrid’s most beautiful and a popular spot for a drink or a meal on one of the terraces of the restaurants surrounding the square. Before you choose a place to sit down, don’t miss the Príncipe de Anglona garden, a beautiful hidden garden created by 18th-century garden designer Javier de Winthuysen; it sits behind a gate just off the lower part of the square.

We ❤️ Madrid! Back to Granada later this morning but we will miss this city. Mind you, looking forward to our beautiful corner of Spain. #Madrid #madridworldpride2017🏳️‍🌈 #summer #sun #travel #blogger #blueskies #verano #bars #Spain #España

Walk up and off Plaza de la Paja towards…

Here, you will find the beautiful, domed San Andrés Church and the San Isidro Museum, a free museum charting the origins of Madrid and the life of its patron saint, San Isidro. Inside the museum, you can see the well where Isidro supposedly performed a miracle; his son fell in, and Isidro raised the waters to the top to save him.

From the plaza turn left onto…

Madrid’s most famous tapas street is an excellent place to end the walking tour. Pop into some tapas bars and enjoy some local cuisine washed down with a chilled glass of vino.

Exams on a Saturday, how can that even be a thing? 😕 #january #walk #stroll #calle #lane #buildings #streetsofmadrid #latina #madrid